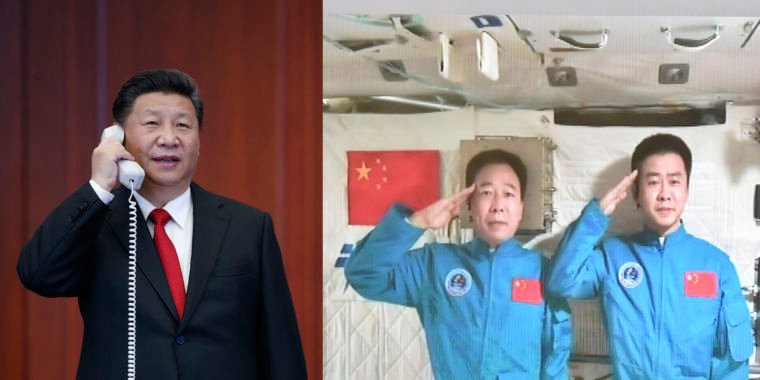 After the Soviet Union flew the Sputnik 1 satellite in 1957, US President Dwight Eisenhower founded NASA. There was some doubt at the time whether the US space agency would be militaristic or civilian in nature and promote the peaceful use of space for exploration and science. Eisenhower made it clear that he favored the latter, and this turned out to be a wise decision, as NASA has since projected American soft power through achievement and apolitical cooperation.

China’s space program, on the other hand, is not as independent of the Communist Party of China or the country’s military programs. This association has led some members of Congress to ban NASA from working directly with the Chinese space agency, citing concerns about technology theft and other potential problems.

That said, the extent to which some taikonauts express allegiance to the communist party is still striking. At the CPC’s 19th National Congress this weekend, three-time taikonaut Jing Haipeng expressed his desire to fly into space for the fourth time. “I can’t wait to go back into space, be a pioneer in the battle one more time,” said the 51-year-old major general, according to Xinhua.

Subsequently, the taikonaut lobbied for the extra flight by expressing his enthusiasm for communism. “Let the vastness of space once again bear witness to the absolute loyalty of a revolutionary soldier, a CPC member and a space warrior,” said Jing. “There are words from the bottom of my heart: never forget that it is the training of the party and the country that allows me to fly higher and higher.”

Xinhua, the state news organization, reported that a branch of the CPC can be established when three or more people gather. Apparently, the Chinese taikonauts plan to establish such a branch on the country’s space station, which could become operational in about five years and can accommodate up to six astronauts. As of now, there are plans for European astronauts to visit the Chinese station, but not for NASA astronauts.