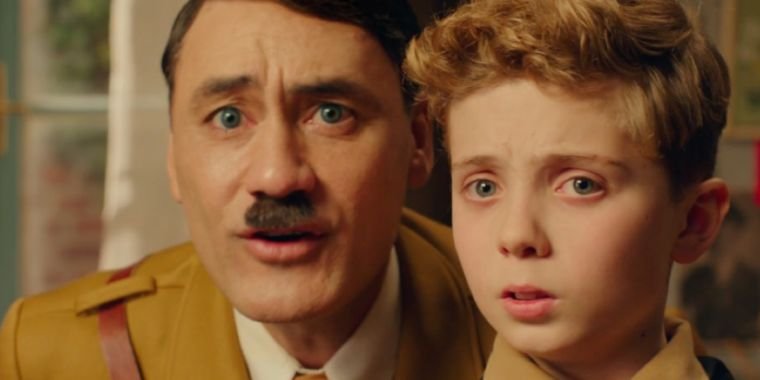 It’s been a bit of a banner year for the beloved writer/director/Thor: Ragnarok‘s Korg actor Taika Waititi, with the TV adaptation of his popular cult film, What we do in the shadeand its roles in Avengers: Endgame and the upcoming Disney+ series, The Mandalorian. Now we get our first good look at Jojo RabbitWaititi’s upcoming dark comedy/drama based on the novel, Airing cagesby Christine Leunens.

According to the film’s official synopsis, Jojo Rabbit is “a World War II satire that follows a lonely German boy (Roman Griffin Davis as JoJo) whose worldview is turned upside down when he discovers that his single mother (Scarlett Johansson) is hiding a young Jewish girl (Thomasin McKenzie) in their Aided only by his idiotic imaginary friend, Adolf Hitler (Taika Waititi), Jojo must confront his blind nationalism.’ The cast also includes Sam Rockwell as the Nazi captain in a Hitler youth camp, Alfie Allen as his second-in-command, Rebel Wilson as the brutal camp instructor, and Stephen Merchant as the Gestapo agent.

The first official teaser came out in July and kicked off with some good old-fashioned slapstick in this Hitler Youth camp to give us an idea of ​​the overall tone of the film. Jojo is tormented by the other kids in the camp for being wimps – hence his nickname ‘Rabbit’. His imaginary BFF, Adolf, assures him that people used to say nasty things about him, too: “Oh, he’s crazy. Oh, look at that psycho, he’s going to kill us all!” (Waititi has said that Adolf is essentially a replacement for the boy’s absent father.)

This latest trailer fleshes out the premise, showing us Jojo in camp enthusiastically trying to impersonate his hero, Adolf Hitler, while the kids play “war games,” respirator drills, basic combat, and of course blow things up. Jojo copes with his natural shyness and fear with the help of his imaginary friend version of Adolf. Rockwell’s Captain Klendorf recalls having an imaginary friend once: “He got me in quite a bit of trouble.” And we can safely assume that the same is true for Jojo, especially when he discovers that his own mother, Rosie, has been home to a beautiful Jewish refugee named Elsa. Of course the Gestapo comes along, though Merchant Captain Deertz is positively impressed by all the Nazi paraphernalia in Jojo’s bedroom: “I wish more of our young boys had your blind fanaticism.”

Elsa is the first Jewish person Jojo has ever met, and their budding friendship forces him to face all the lies he’s learned through camp gossip and Nazi propaganda (such as “Jews can read each other’s minds”). Imaginary Adolf is of course not happy about that. “I’m the enemy,” Jojo tells Elsa. She replies with penetrating insight: “You’re not a Nazi, Jojo, you’re a 10-year-old boy who likes to dress up in a funny uniform and be part of a club.” And given the outcome of World War II, we will probably see the last breath of the Nazi regime, with everything that portends for our young protagonist. The final shot of this trailer is Jojo confessing to one of his camp buddies that nothing is right anymore. “Yeah, it’s definitely not a good time to be a Nazi,” the boy replies.

Jojo Rabbit will premiere at the Toronto International Film Festival on September 8, 2019, and will also screen at Fantastic Fest later this month. It hits theaters October 18, 2019. (And yes, because of Disney’s acquisition of 21st Century Fox, Jojo Rabbit may be officially in the running for the most unexpected “Disney” movie release.)