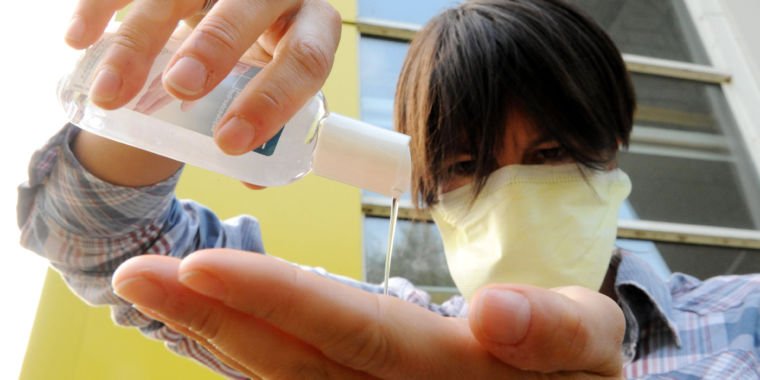 Popular hand sanitizers may go the way of antibiotics, according to a study published this week Science Translational Medicine.

Bacteria collected from two hospitals in Australia between 1997 and 2015 seemed to gradually get better at surviving the alcohol used in hand sanitizers, researchers found. The increase in drink tolerance by the bacteria appeared to be in line with the gradually increasing use of alcohol-based disinfectants by hospitals over the same period – an increase aimed at improving sanitation and curbing the spread of the same. bacteria. But the germ-monitoring data and a series of experiments the researchers conducted in mice suggest that the effort could backfire and that hooch hygiene could, in fact, encourage the spread of drug-resistant pathogens.

The researchers, led by infectious disease expert Paul Johnson and University of Melbourne microbiologist Timothy Stinear, summed up the findings and wrote:

We proposed here that the significant positive relationship between time and increasing alcohol tolerance is a response of the bacteria to increased exposure to alcohols in disinfectant preparations and that the more tolerant strains may displace their less alcohol tolerant predecessors.

Johnson, Stinear and colleagues broke open the study after noting a puzzling pattern in hospital-acquired infections. As healthcare facilities ramped up their sanitation with alcohol-based rubs, certain nefarious germs seemed to be in decline – methicillin-resistant Staphylococcus aureus, MRSA, for example — yet another set of germs seemed to be thriving. Those would be enterococcal bacteria, which are usually harmless inhabitants of the human gut, but can become opportunistic pathogens lurking in hospitals and plunging on vulnerable patients.

A species called Enterococcus faecium is of particular interest because it has become a leading cause of hospital-acquired infections and is often resistant to multiple antibiotics, including a last-line drug called vancomycin.

To understand why these germs seemed so excited, the researchers examined a collection of E. faecium bacteria collected from infected patients in two Australian hospitals between 1997 and 2015. First, they subjected the germs to low levels of isopropanol, a type of alcohol found in hand sanitizers.

Hand sanitizers often contain 70 percent or more isopropanol or ethanol, which usually destroys bacteria. The alcohols essentially tear up the outer membranes of the microbes, causing molecular chaos and the guts of the germs to leak out. In high concentrations, the alcohols are quickly lethal.

To prevent them from simply butchering their isolates, the researchers gave them a diluted 23 percent isopropanol mixture. This wiped out some, but not all, of the germs. But when they compared the isolates in batches based on when they were collected, they saw a clear shift. The bacteria collected between 2009 and 2015 had a 10-fold higher survival rate than those collected before 2004.

The researchers noted that hospitals began guzzling the alcohol-based sanitizers in 2002. In fact, they went from 100 liters of alcohol-based hand gels in 2001 to 1,000 liters per month in 2015 – a tenfold increase.

Of course, the hospitals don’t use weak-sauce sanitizers, 23 percent alcohol; they use the 70 percent lethal concentrations. To see if the bacteria’s tolerance shift was at all relevant to sanitation and infection risks in hospitals, the researchers turned to mice.

First, the researchers covered the floors of mouse cages with E. faecium strains, either strains that were easily killed by alcohol or strains with a relatively high tolerance. Then they mopped the floors with a 70 percent alcohol solution and released the mice to play in the cages for an hour. Then the researchers scanned the rodents’ poop to see how many of them had managed to pick it up E. faecium out of the cages, despite the cleaning.

In repeated experiments (and using sham water treatments as a control), the researchers found that the more alcohol-tolerant bacteria were better at surviving the floor cleaning and infecting the mice than their less tolerant counterparts.

The researchers did genetic comparisons to try to rule out that the alcohol-tolerant isolates were simply more contagious than the others — the isolates didn’t seem to be. The team also hunted for genetic changes that could explain the germs’ ability to retain their drink. In the case of antibiotic resistance, for example, a few genes or mutations can sometimes explain the survival of a microbe. But in this case, alcohol tolerance seems more complicated, involving many genes that work together to harden germs. Some of those genes seem to be involved in metabolism.

Researchers will have to do a lot more work to verify and understand alcohol tolerance. But for now, the researchers conclude that:

The development of alcohol-tolerant strains of E. faecium has the potential to undermine the effectiveness of standard precautions for alcohol-based disinfectants and may, in part, increase the [vancomycin-resistant Enterococci] infection now commonly reported in hospitals in Europe, Asia, America and Australia.