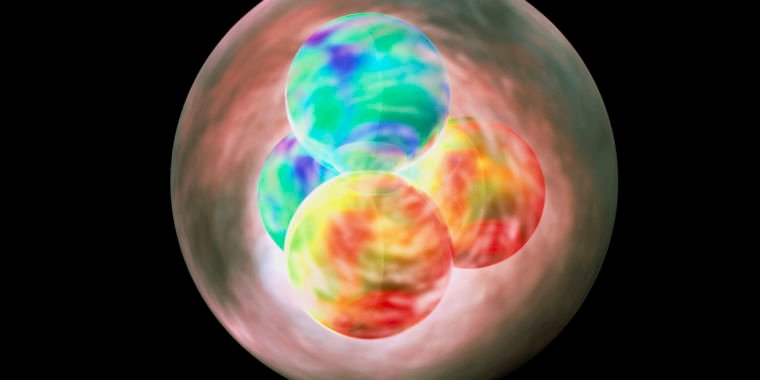 In the last few months I’ve mentioned super solids a few times, which is a bit unusual for something we’re not sure if it actually exists. However, a recent article seems to offer some pretty strong confirmation that super solids are real. That means it’s time to delve into the strange and wonderful world of low-temperature helium.

Helium is without a doubt the strangest material in the universe, beating molecular hydrogen with a rather long nose. The key to helium’s strangeness is that it’s normally a boson: a helium-4 atom is made up of two protons, two neutrons, and two electrons, which combine to form an even number, creating a composite boson.

What does all that mean? It means that when it is cold enough, a group of helium atoms can enter the same quantum state. Even though they are spread over an entire ship, they all know something about the condition of their distant neighbors. This allows the helium atoms to flow without resistance, a state called superfluidity. It is good company among other strange and wonderful properties of helium.

There is another type of helium that has only one neutron (i.e. two protons, one neutron and two electrons), which means it is not a composite boson. Instead, it is a fermion. When cold, these helium atoms can’t enter the same quantum state, so they don’t become superfluid. But cool them enough, and two helium atoms can pair to create a compound boson. At that very low temperature, superfluidity also arises in helium-3.

Neither helium-3 nor helium-4 can become solids at atmospheric pressure. Instead, they become solids at 20-40 atmospheres. As a solid, at the right temperature, there are predictions that helium-4 can enter the supersolid state, while helium-3, which is not a boson, will not. The problem is that the super solid is also very difficult to detect. Among other things, it hides changes in the elastic properties of solid helium.

What is a super solid?

A super solid makes its presence known by flowing without resistance. But what does it mean to say that a solid flows?

When helium (both types) becomes a solid, it crystallizes. That means that all atoms stick together in a fixed arrangement – to give one example, atoms can line up so that they are on the corners of a cube. While solids form, some positions that atoms should have don’t. Others are out of position. When pressure is applied, atoms can move to these vacant positions, creating new vacant positions. As the atoms shuffle, the solid flows.

In order to flow, the atoms must have enough energy to leave their current location before they can move to new locations. As the temperature drops, atoms have less energy and can no longer move. That means that the flow rate must decrease with temperature.

Increasing current with reduced temperature has been observed in Helium-4. Unfortunately, it was not quite the smoking gun that the researchers were looking for, because the elastic properties of the solid matter also play a role. As the temperature drops, there is competition between reduced movement of the atoms because they have less energy and more movement because the solid as a whole is better able to transfer any applied force to a sensor. Perhaps the increased current was actually a change in elastic properties?

Helium-3 to the rescue

To argue for super-solidity, researchers turned to a form of helium that doesn’t turn into a super-solid: helium-3.

The researchers repeated their experiments with solid helium-3 and saw that the flow rate decreased with decreasing temperature, just as expected for a normal solid. And because the elastic properties of helium-3 are nearly identical to those of helium-4, the researchers were able to eliminate that as an effect.

Indeed, the researchers were able to distinguish the elastic motion of the solid and the flow of the solid via atomic motion between vacancies. They showed that the flow is very different for helium-4 compared to helium-3.

Then came the surprise. At the lowest temperatures, the flow rate of helium-3 no longer decreased. It did not exhibit super solid properties, but it also no longer behaved like a normal solid.

If you remember from above, helium-3 can become a superfluid at very low temperatures, as the individual atoms can pair to create bosons. This should also be possible for solid helium-3. The researchers were not at a temperature low enough to expect a supersolid helium-3. But the temperature was low enough that maybe, just maybe, a pairing took place, starting to show some super-solid properties.

That last conclusion is a bit speculative in my opinion. However, the contrast between the behavior of helium-3 and helium-4 is quite large. That alone makes the existence of the supersolid state that much stronger.