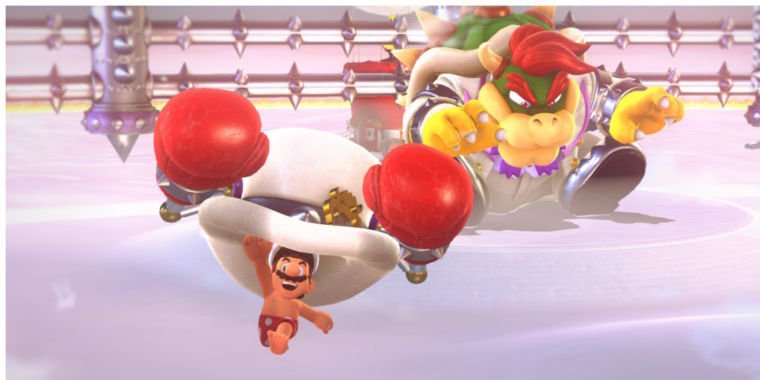 A few weeks ago I was dragged into a discussion about what defines a “core” Mario game. One proposed definition was based on Mario trying to reach or exit an explicit “goal” at the end of the level.

While a core Mario game may have secondary goals (such as collecting red coins or one-off actions) and while there may be multiple exits in a single level, getting from start to finish has always been a defining feature of its adventures. Even more open 3D games like Super Mario 64, Super Mario Sunshineand Super Mario Galaxy have kept this model to some degree, ending with a run through the level and putting Mario back at the start after collecting a star (or “shining”).

By this strict definition, Super Mario Odyssey can’t be considered a core Mario game at all. The game’s wide-open “Kingdoms” don’t have fixed endpoints, instead they exist more as spaces to run and jump around at your leisure. When you come across one of the many power moons that are Mario’s most explicit goals in these levels, the exploration continues from that same point after a short animation. Plus, you only need to collect a small handful of these available moons before you can move on to the next kingdom (and back) at your leisure.

This may sound like a minor difference, but it changes the flow and feel of the standard Mario adventure in a profound way. Super Mario Odyssey is definitely not a game to get from point A to point B. Instead, it’s a game about just wandering, getting lost in inventive environments and seeing what happens.

While there were many hidden secrets in previous Mario games, odyssey seems more explicit about making those hidden gems to the point of adventure. Secret areas that may have hidden a power-up or cache of coins in another Mario game are much more likely to hide one of the game’s hundreds of power moons in odyssey. These secret locations therefore reward players with a much more concrete and countable bounty for your aimless exploration.

Most levels have dozens and dozens of these power moons to find, and dozens more only become available in the endgame after the main credits have rolled. At first glance, it seems almost impossible that these kingdoms have enough space to house the dozens of power moons listed in the game’s checklist. Then you start exploring and finding those hidden nooks and crannies not visible in those first panoramas, discovering just how dense the rising, spinning, layered level design can be.

With hundreds of moons to find, some are ultimately more interesting than others. You will occasionally find a moon just floating in your path, seemingly rewarding just for your existence at this point in the game. Others announce their presence by means of a rainbow glow from a nondescript chest, or they are given to you for simply talking to one of the highly animated citizens that surround a kingdom’s central city.

But for the most part, the designers show a lot of imagination in coming up with new and engaging tasks for Mario to complete. Often you’ll see a moon on a high ledge and wonder how the hell Mario can jump high or far enough to reach it before you do some more exploring and find the right path hidden in a secluded spot. Many moons strain your senses, making you look for that hidden hole in the wall or only become visible when you roll the camera back around that blind spot you ran past before.

Some moons made me grin at their absurdity, like a race between round, bouncing Yetis or a quest to park a scooter on the roof of a skyscraper. Some moons made me laugh out loud with their unexpectedness, such as when a glowing, moon-hoarding dove happened to fly my way in the urban-inspired Metro Kingdom. And some almost made me throw my controllers in frustration, like a timed challenge where a moon disappeared for just a split second before I could get Mario to that point.