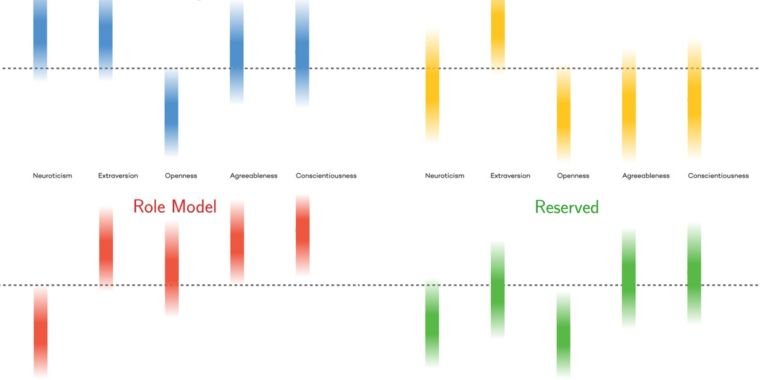 People love to take quizzes online; just ask Buzzfeed and Facebook. A new study has searched some of the largest online personality quiz datasets and identified four different “types” in them. The new methodology used for this study – described in detail in a new article in Nature Human behavior-is rigorous and reproducible, which could help move the analysis of personality types from the dubious self-help section in your local bookstore to serious science journals.

Frankly, personality “type” is not the ideal nomenclature here; personality clusters may be more accurate. Paper co-author William Revelle (Northwestern University) is a little wary of the idea of ​​different personality types, such as those embraced by the hugely popular Myers-Briggs Type Indicator. Revelle is an adamant “anti-fan” of the Myers-Briggs, and he’s not alone. Most scientists who study personality prefer to think of it as a series of continuous dimensions, in which people shift as they age where they fall on the spectrum of different traits.

What is new here is the identification of four dominant clusters in the general distribution of traits. Revelle prefers to think of them as “lumps in the batter” and suggests a good analogy would be how people tend to concentrate in cities across the United States.

“We don’t say that everybody belongs to one of those four categories.”

Divide the country into four regions – north, south, east and west – and see how the population density is distributed. You will likely find the highest concentration of people living in densely populated cities such as New York, Chicago, Los Angeles, or Houston. “But to describe everyone living in one of those four cities is a mistake,” he says. Likewise, “What we’re describing is the probability of being in certain parts of that distribution; we’re not saying that” everybody belongs to one of those four categories.”

The Northwestern researchers used publicly available data from online quizzes taken by 1.5 million people around the world. Those data were then plotted according to the so-called Big Five fundamental personality traits: neuroticism, extroversion, openness, kindness and conscientiousness. The Big Five is currently the professional standard for social psychologists studying personality. (Here’s a good summary of what each of those traits means to psychologists.) Then they applied their algorithms to the resulting data set.

Revelle admits that when his Northwestern colleague and co-author Luis Amaral came to him with the initial findings using traditional clustering algorithms, he had found 16 different clusters. Revelle was immediately skeptical: “That was ridiculous,” he says. Thinking there were no types lurking in the data at all, he challenged Amaral and another co-author, Martin Gerlach, to fine-tune their analysis.

“These statistical learning algorithms don’t automatically give the correct answer,” Revelle says. “You then have to compare it with arbitrary solutions.” That second step made all the difference, by imposing additional restrictions to record the results. The researchers arrived at four different personality clusters:

Average: These people score high on neuroticism and extroversion, but low on openness. It is the most typical category, with women fitting more often than men.

Reserved: This type of person is emotionally stable without being particularly open or neurotic. They tend to score lower on extroversion, but tend to be somewhat agreeable and conscientious.

role models: These people score high on every trait except neuroticism, and the odds of someone fitting into this category increase dramatically as they get older. “These are people who are trustworthy and open to new ideas,” Amaral says. “These are good people to be in charge.” Women are more likely than men to be role models.

The team used one dataset in the initial analysis and then replicated the same result on two other independent datasets, meaning their methodology is replicable — at least on comparably large datasets, which are much more common today, thanks to the internet and the rise of free access. “A study with such a large dataset would not have been possible without the Internet,” says Amaral.