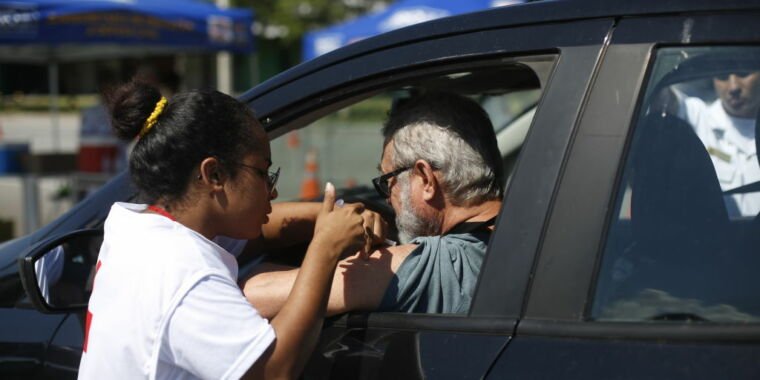 At this point, the old news is that Russia is intervening in part in American society by using troll farms organized by its Internet Research Agency. While the farms’ most high-profile activity was supporting Donald Trump during the 2016 election, the trolls were active both before and after, largely in efforts to amplify existing divisions in American society.

One of the areas where they are divisive is vaccination, which has recently been the subject of numerous public controversies. But while it was clear that Russian trolls were talking about vaccines on social media, it was not clear what they hoped to achieve. A new study suggests their goals are twofold, creating the risk of politicization of an issue that has been largely free of partisan politics.

The results provide a preview of where we could go with misinformation about the coronavirus and why things could get worse once a vaccine becomes available.

Vaccines are an unusual problem for the American public. As the stories we linked above make clear, vaccine safety has become a major controversy, and there are regular legislative actions that bring that controversy to the fore. Yet the issue has managed to avoid association with any particular ideology or policy. The vast majority of the American public accepts the medical community’s conclusions that vaccines are generally safe and effective, as well as a critical part of disease control.

The rare individuals who reject this conclusion tend to be at the extremes. On the left, some people distrust any effort involving companies like the drug companies, while on the right, the opposition focuses on the government’s role in vaccination programs.

Nevertheless, the public controversy makes vaccine safety an obvious target for the Russian Internet Research Agency (IRA), aiming to stir up divisions among the American public. And indeed, social media posts about vaccine safety from IRA accounts started popping up as early as 2015. But it wasn’t clear whether the messages were part of a strategic effort or just an incidental byproduct of the trolls’ attempts to create the illusion that their accounts belonged to real people. So a team of three investigators (Dror Walter, Yotam Ophir and Kathleen Hall Jamieson) decided to take a closer look at the IRA’s activities.

To do this, the researchers leveraged a large collection of accounts that Twitter had identified as controlled by the IRA and shut down. Nearly 3 million of the tweets from those accounts have been preserved over a three-year period, allowing for detailed analysis of the bots’ behavior.

Although the bots were involved in the vaccine controversy, that was a relatively small portion of their content, accounting for just under 2,000 tweets, or less than 0.1 percent of the total. But vaccine tweets were not evenly distributed across the accounts. To learn more, the researchers used a machine learning tool to categorize the accounts based on their word usage and the topics they discussed.

The algorithm determined that there were nine clusters of accounts, several of which never mentioned vaccines. For example, some of the bot accounts were involved in attempts to manipulate the popularity of hashtags and did not talk about vaccines. Likewise, unsurprisingly, a series of anti-Ukraine accounts aimed at supporting Russia’s annexation of Crimea were devoid of vaccine content.

But a number of other categories of accounts have posted vaccine-focused posts. However, some of them were not particularly informative. Three types of accounts focused on news and events, reporting sporadic vaccine stories, but their content was rare and either neutral or contained a balanced mix of pro- and anti-vaccine items.

One unexpected group that mentioned vaccines was a series of accounts pretending to be African Americans. Vaccines were a small part of their posts (0.03 percent), but more than 10 percent of accounts in this group mentioned them at least once. The messages were more or less evenly split between pro- and anti-vaccine statements, with the anti-vaccine statements largely aimed at an anti-corporate message.

Two other groups involved in vaccine messaging were collections of pro- and anti-Trump accounts. The anti-Trump/liberal group had a percentage of posts (0.5 percent) that was relatively high and most pro-vaccine, with 38 percent of the post promoting them and another 52 percent being neutral. The pro-Trump group, on the other hand, tweeted much less about vaccines (0.04 percent), but 17 percent of accounts in this group mentioned the topic at least once. Unfortunately, more than half of their tweets were anti-vaccination.

So do Russian trolls see vaccines as a possible issue of a political wedge? It’s a little hard to say. Many of the accounts analyzed by the authors attempted to maintain a diverse mix of topics in their posts, in part to avoid the automated systems Twitter uses to identify bot accounts. As such, at least some of this may have just been an attempt to make an account look like it belonged to a real human with different interests. But that doesn’t necessarily explain why there’s a difference between how the two types of accounts approached vaccines or why the trolls decided anti-pharmaceutical agitation was something consistent with African American behavior.

The researchers note that there is some evidence that vaccine safety is becoming politically polarized. And it’s consistent with some of the response to the coronavirus outbreak, with medical experts being targeted by pro-Trump groups.

But the real concern here is that the trolls’ activity will allay a fringe controversy and help create one that matters to the partisan identity. Even if their initial coverage was random, their effective mimicry of identities can lead people with similar identities to adopt the same attitude, leading to reinforcement.

That’s dangerous now, during a public health emergency. But it can have long-lasting effects. For starters, establishing herd immunity to the coronavirus without large-scale deaths and disruption will require the widespread use of a vaccine as soon as it becomes available. And vaccines will remain at the center of public health long after this pandemic is over.

However, optimistically, it’s also possible that the problems already created by the pandemic will lead to widespread adoption of the vaccine when it becomes available and help keep anti-vaccine attitudes at the fringe of public opinion.