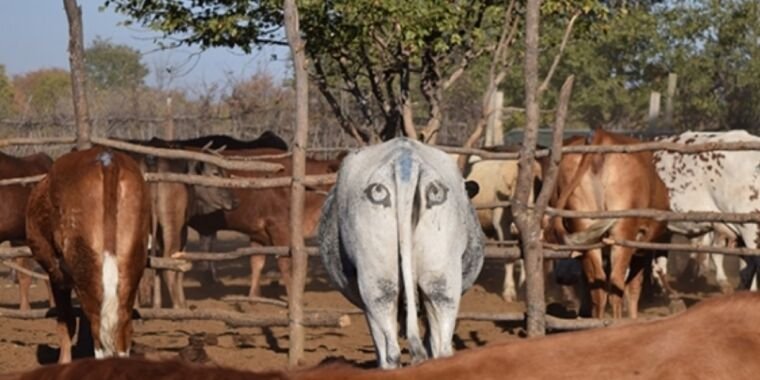 Cattle herds in Botswana’s Okavango Delta region are plagued by attacks from lions and other predators, prompting farmers to retaliate by killing the predators. An alternative non-lethal technique involves painting eyes on the butts of livestock to ambush predators like lions into thinking they’ve been spotted by their intended prey. It’s been called the “Eye-Cow Project,” and a recent paper published in the journal Communications Biology provides solid empirical evidence for the practice. Practical guides for using the “eye-cow” technique are now available in both English and Setswana for farmers to try for themselves.

Neil Jordan, a conservation biologist at the University of New South Wales in Australia, got the idea several years ago while doing fieldwork in Botswana. Local ranchers killed a few lionesses in retaliation for preying on their herds of cattle, and Jordan wanted to come up with a non-lethal alternative. The African lion population has dropped significantly from over 100,000 in the 1990s to somewhere between 23,000 and 39,000 in 2016, largely due to retaliatory killings.

Jordan knew that butterfly wings with eye-like patterns are known to repel birds of prey and are also found in certain fish, mollusks, amphibians and birds, although no such patterns had been seen in mammals. He also found that loggers in Indian forests have been known to wear masks on their heads to discourage tigers from preying. He had observed a lion stalking an impala and noticed the predator gave up the chase when the prey saw it. Lions are ambushes, Jordan reasoned, and he decided to test his “detection hypothesis” that painting eyes on the butts of cows would discourage predatory behavior from the local lion population.

The Botswana Predator Conservation Trust (BPCT) agreed to work with a local farmer on the project with Jordan for a 10-week pilot study. Jordan and the farmer painted eyes on a third of a herd of 62 cattle and counted each night when the cattle returned to the herd to see how many had survived. Only three cows were killed during that period, none of which had painted eyes on their asses. All painted cows survived.

Granted, it was a small sample size, but those results were encouraging enough to convince Jordan to conduct a more ambitious study over the past four years. His team worked with local farmers in the Okavango Delta area and painted the cattle in 14 herds (a total of 2,061 animals). They used acrylic paint (black and white or yellow), applied with foam stencils in the shape of the inner and outer “eye”. The colors were chosen “for their highly contrasting and aposematic features, common in natural predator signaling settings,” the authors wrote.

About a third of the cattle in each herd got the eye patterns, a third got simple cross marks, and a third were not painted at all. The results confirmed Jordan’s preliminary findings. Cattle with the painted eyes on their buttocks had a significantly higher chance of survival than cattle with crosses on their butts and animals that were not painted at all. But the authors were surprised to find that even the painted crosses offered some survival advantage over the unpainted livestock. Over the course of the four-year study, 15 (out of 835) unpainted and four (out of 543) cross-painted cattle were killed by lions; none of the 683 cattle with painted eyes were killed.

“To our knowledge, our study is the first time that eye spots have been shown to deter large mammalian predators,” said study co-author Cameron Radford, a graduate student at the University of South Wales. “Previous work on mammalian responses to eye patterns has generally supported the detection hypothesis. We think this may indicate the presence of an inherent response to eyes that can be exploited to modify behavior in practical situations, such as preventing conflicts between humans and nature, and reducing criminal activity in humans.”

There are a few caveats. First, Jordan acknowledged that there were always unmarked cattle in the herd for their experiments as controls — what he called “proverbial sacrificial lambs.” It’s not clear whether applying painted eyes to cow’s butts would be as effective if all the cows in the herd were painted. He suggests that farmers apply the marks to the most valuable livestock in the herd as the best approach until future research can be done. Second, there’s the matter of habituation: whether predators will eventually get used to the painted eyes and learn to ignore them as a deterrent.

“Protecting livestock from wild carnivores — and carnivores themselves — is an important and complex issue that likely requires the application of a range of tools, including practical and social interventions,” Jordan said. “The eye-cow technique is one of a number of tools that can prevent conflict between carnivore and livestock. No instrument is likely to be a silver bullet. Indeed, we must do much better than a silver bullet if we can coexist with the successful of livestock and large carnivores, but we are hopeful that this simple, inexpensive, non-lethal approach could lower the cost of coexistence for the farmers who are the victims.”