Study: Children’s belief in Santa Claus is more nuanced than you think | Techilink 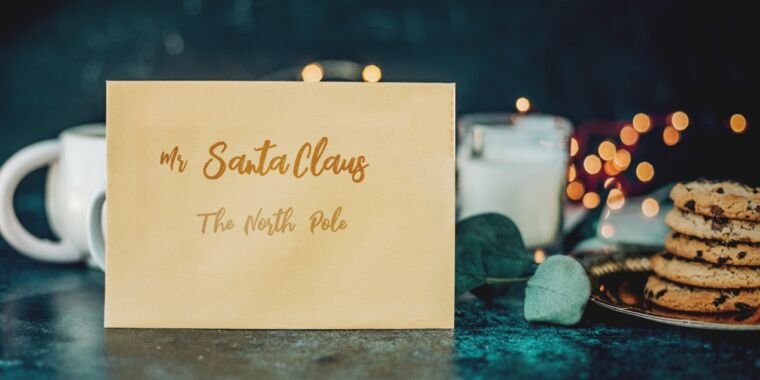 There is rarely time to write about every cool science story that comes our way. So this year, we’re republishing a special series of Twelve Days of Christmas posts, highlighting a science story that fell through the cracks in 2020, every day from December 25 through January 5. Today: How children’s belief in Santa Claus is part of a hierarchical pantheon of real and unreal figures.

Do you believe in Santa Claus? If you’re over eight, probably not. We tend to think that young children are simply more gullible because of their younger years. But their belief in Santa Claus, the tooth fairy or similar cultural figures isn’t quite as straightforward as that, according to a June paper published in the journal PLOS ONE.

Such figures rather fall into an ambiguous category between ‘real’ and ‘not real’ for many children, indicating that their belief structures are much more nuanced than previously believed. Rituals such as writing letters to Santa Claus, or omitting milk and cookies on Christmas Eve, reinforce their belief in these ambiguous figures. Running out of milk and cookies on Christmas morning serves as a form of circumstantial evidence, and when kids interact with a Santa figure at the mall, that belief is reinforced.

†[Children] are cannier than we give them credit.”

“Historically, in the field of psychology, children have long been thought to be gullible, which is very unfair,” lead author Rohan Kapitany of Keene University told Ars. “They ask a lot of questions. They think deeply. Kids believe in these things much faster than adults, but you can’t just convince them that the ogre is under the bed. It’s a lot harder than that. They’re cannier than we give them credit.”

Kapitany received his PhD in developmental psychology, focusing on how children learn through imitation, and this led to his interest in the role of rituals in shaping beliefs. He was interested in further exploring how children evaluate different types of figures across a spectrum of real and unreal.

“I don’t think it’s a coincidence that [rituals] are so often linked to religions and unseen things like values ​​and beliefs, and it seems like a very fertile ground to start understanding how children reconcile reality,” he said. “Santa Claus and the Easter Bunny are easy examples, but children have to struggle with more complex things, like dinosaurs, or the presence of a contamination in our world. We don’t get direct evidence of it, so we look at people’s behavior to substantiate our beliefs, based on their behavior and beliefs.”

One of the more interesting studies in this area was a 2013 article by Jacqueline Woolley et al. featuring a fictional character called the Candy Witch. Participating children were told about the Candy Witch, a friendly creature who would trade toys for their Halloween candy. But the kids had to exercise self-control and not eat all their candy to “pay” the Candy Witch for the toys. And their parents had to call the witch to arrange her visit.

The result: Most of the kids believed the Candy Witch was real, even though they never saw her in person — a belief that persisted even a year later with some of the participating kids. “Woolley and her collaborators didn’t frame it in terms of rituals, but she went on to talk about rituals as a special form of witnessing by asking kids not to eat all their Halloween candies,” Kapitany said. “It’s a piggyback on a lot of other structural plans kids have about Christmas.”

In fact, the Candy Witch study is a bit like the infamous marshmallow test, where young children were left alone in a room with a marshmallow. If they couldn’t eat it for 15 minutes, they would get a second marshmallow when the researcher returned. In the Candy Witch experiment, children had to wait two weeks before receiving a gift as a reward. “I think we don’t quite realize how big the job Woolley was asking of these kids,” Kapitany said. “The kind of dedication she asked kids to join is the kind of dedication that would only be asked if something was real.”

Based on those results, Woolley has argued that it takes three factors to convince children that a particular number is real: a testimony, that is, being told about the number; circumstantial evidence, such as Santa filling Christmas stockings or finding money from the tooth fairy under their pillow; and participate in rituals, such as leaving milk and cookies for Santa, or hunting for the Easter Bunny’s chocolate eggs. Direct evidence, such as a visit to Santa at the mall, reduces a child’s natural skepticism. In other words, children rely on several lines of evidence when building their beliefs, some more influential than others – a “hierarchy of approval.”

This latest study by Kapitany et al† was intended to be “a first attempt at presenting children with a series of real, cultural and fictional characters to determine whether children build a hierarchy of approval,” the authors wrote. They asked 176 Australian children, ages 2 to 11, to rate how real they thought 13 different figures were, on a scale from 0 (not real at all) to 8 (very real).

Those figures included Santa Claus and the Tooth Fairy, ghosts, dinosaurs, fictional characters (SpongeBob Squarepants, Princess Elsa from Frozen), and real figures such as the popular Australian children’s music group The Wiggles. For comparison, they also had 56 adults. All these numbers vary in their degree of ‘reality’.

The data showed that the conception of most of the children of those 13 figures could be classified into four groups. The Wiggles and dinosaurs scored highest on the “authenticity scale” for children (7 points), followed by cultural figures such as Santa Claus and the tooth fairy (6 points). Ranking lower were ambiguous figures such as aliens, dragons and ghosts, and fictional characters such as Spongebob Squarepants. For adults and children over the age of seven, the 13 figures fell into three groups, omitting the cultural figures category.

“The hierarchy is important because not all forms of evidence in our world are equal,” Kapitany says. In the case of testimonials, for example, “I can tell you that pigs fly, but you won’t believe that until you have direct proof of it.” He believes that precious actions, often in the form of rituals, are among the highest forms of evidence in this hierarchy. “You can get faith without rituals, but rituals are especially helpful in providing beliefs,” he said. Per Kapitany, it is no coincidence that these things occur in religions or organizations such as the military, where ideological conformation is desired.

While the hierarchy of approval revealed by the data differed in some ways from their original hypothetical view, there was still considerable support for many of Kapitany’s ideas. Kapitany has since completed a follow-up study in Europe, and that data replicates the findings, although the paper on that work is still being prepared for publication.

As for future work, Kapitany is keen to conduct experiments similar to Woolley’s Candy Witch project in the lab, rather than relying on correlation data from online surveys. “I’d like to do a more focused, large-scale study where we can convince kids that the oogey boogey exists, and see if we can get long-term approval and behavior to match it,” he said.