Strange potato-shaped dwarf planet has ring, may not be a planet | Techilink 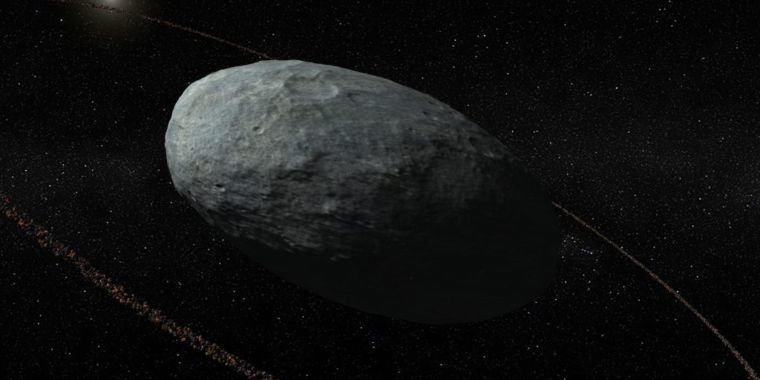 Thanks in large part to improvements in our instruments, we are beginning to get a sense of what the far reaches of our solar system look like. Beyond the outer planet’s orbit is a large collection of icy dwarf planets called trans-Neptunian objects, or TNOs. Pluto may have been the founding member of the TNOs, but there are now over 1,200 known bodies on the list; only 270 of these have been observed well enough to characterize their orbits. It’s a safe bet that there will be some surprises among them.

In a paper released today, researchers report on one such surprise, courtesy of the dwarf planet Haumea: It has a ring. The observations that spotted the ring also suggest that Haumea is bigger than we thought it was, meaning gravity hasn’t pulled it into a stable, round shape yet. Curiously, this means that Haumea may not fit the definition of dwarf planet set by astronomers.

Haumea, named after a Hawaiian goddess, comes closest to the sun at 35 astronomical units (AU, the typical distance between the Earth and the sun). For context, Neptune is usually about 30 AU. Due to its highly elliptical orbit, Haumea is over 50 AU at its farthest distance from the Sun. Not much sunlight reaches it at those distances, so most observations of the dwarf planet only involve a few blotchy pixels. But we’ve observed it enough to know that it’s consistently associated with two smaller smears of pixels, its moons Hi’iaka and Namaka. The orbits of the moons told us something about Haumea’s mass.

The images also show that Haumea has a strange, potato-like shape, technically a “triaxial ellipsoid.” To understand that term, think of a sphere: Since it has the same radius in every direction, it really only has one axis. Now squash that sphere down so that it is still round, but flatter. Now the object has a short radius from center to top and a long radius from center to equator. It’s biaxial. Now push in two opposite sides on the equator and form the potato shape. This splits the equatorial axis in two, one for the side long axis and a second for the short axis. Hence three axes, or triaxial.

We could tell this was the case because of relatively rapid changes in the amount of light reflected from Haumea, as a different portion of its surface would face Earth depending on where it was in its rotation. This indicates that it completes a rotation in less than four hours.

But all these measurements contain significant uncertainties, so there was plenty of room for further observations. An opportunity presented itself in January this year when orbital calculations suggested Haumea would pass in front of the star URAT1 533-182543. So a large group of researchers arranged observations at a set of telescopes across Europe.

That’s not a moon

The idea behind the observations is that Haumea would block some or all of the star’s light as it passed between Earth and the star. The exact amount of light blocked would allow us to get new measurements of the dwarf planet’s shape and possibly provide other details about its properties.

This certainly worked. To begin with, each of the twelve telescopes used saw the same pattern as the planet passed in front of the star: instead of a gradual eclipse, the light suddenly went out. This is an indication that Haumea has no atmosphere, which would have caused a more gradual darkening. The team behind the observations estimates that any gas around Haumea is so scarce that atmospheric pressure would be measured in nanobars (the atmospheric pressure on Earth is about one bar).

Another notable feature in many of the observations is that the light dimmed slightly before and after the planet passed in front of the star. This, the authors conclude, is the result of a ring blocking about half of the light that would otherwise pass through it. A few models agree with the timing of the slight dip in the star’s light, but the researchers prefer one that places the ring on Haumea’s equator and between the equator and the moon Hi’iaka. This would make the ring 70 km thick and place it about 1000 km above the planet’s equator.

This places the ring in about a 3:1 resonance with the planet’s surface. This means that a given location in the ring rotates once every three times the planet rotates. That’s also close enough that Haumea’s gravity will be strong enough to disrupt moons that might otherwise form in the ring material.

The transit also revealed more about Haumea’s shape. Observations before and after suggested that the dwarf planet was in an orientation that would block the minimum amount of light. That provided a size for the smallest axles; comparing that to previous measurements in other orientations would yield a new estimate of the larger axes.

The new estimates suggest that Haumea is larger than we thought, with a long axis of at least 2,322 km. That, in turn, suggests that the density is much lower, at about 1,900 kilograms per cubic meter. This value is in line with that we have seen at other TNOs, making Haumea less of an outlier.

But those numbers could spell some trouble for Haumea’s status as a dwarf planet. All planets, dwarf or not, are defined by enough gravity to force them into a stable, rounded shape. This state is called hydrostatic equilibrium. The new values ​​for Haumea suggest that it may not have reached this point yet – it will need further reshaping and rounding. Thus, by this definition, Haumea is not a dwarf planet.

Of course, Haumea’s ring, rapid rotation, and strange shape could all point to a possible impact. The problem with that idea is that Haumea isn’t the only small body recently spotted wearing a ring. A few bodies with orbits intersecting those of the giant planets (called “centaurs”) have recently found small rings. It is believed that these bodies were originally TNOs brought in by gravitational interactions with the giant planets of the outer solar system.

So rings may be a common feature beyond Neptune’s orbit, and it has nothing to do with Haumea’s other odd features. It’s impossible to say at this point, but the ring’s presence makes the object — planet or not — well worth further observation.