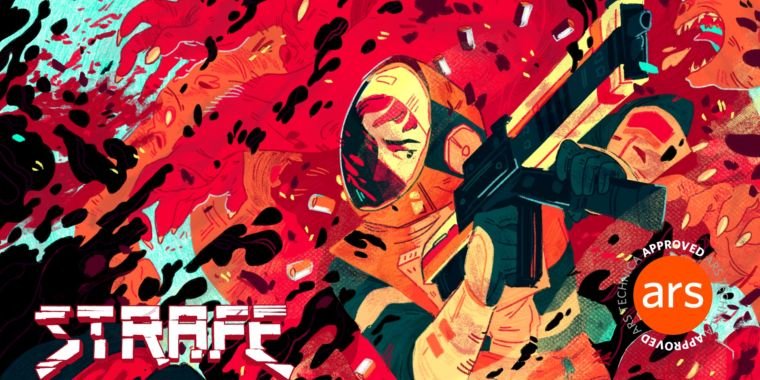 You’d be forgiven for getting tired of procedurally generated and “roguelike” video games. Too often these types of games rely on the gimmick of random content as opposed to finely crafted, enjoyable experiences. Mathematical and procedural tricks don’t make up for a game whose difficulty or boredom doesn’t come with a reward.

You’d be forgiven for watching a new game too punishment‘s list of qualities and insta-formation. It started out as a Kickstarter, made by a developer no one has heard of, with a reliance on dated images, cheap ads and… wait for it… procedurally generated levels. Frankly, that list of gimmicks reads like fodder for Ars Technica’s email spam filter.

And yet, here I am, determined to convince you that this recipe turned out to be for disaster good. I’ve had a full week playing through so many gory 90s throwback levels punishment‘s first-person running-and-award, and I’ve had pretty much nothing but fun. The game wears its biggest issues on its blocky, voxel sleeves, almost as a mark of pride, and as a result, it’s not for everyone.

But no game in recent memory has done a better job of slipping players into their favorite memories of mid-90s shooters – while ramping up their pace and suspense.

Need a plot? Eef you! You only get a cheap VHS style tutorial, complete with an actual actress making a solid Brenda Walsh impression. She explains that you have been hired to explore abandoned spaceships and collect valuable scrap for a company. The Weyland-Yutani vibe is immediate, intense and shameless – and that’s about it. Time to kill.

Each time you start up the game, you can choose from one of three default weapons: machine gun, railgun, or single-barrel shotgun. These should feel instantly familiar to anyone who’s played earthquake II, which had all three, and they have obvious strengths and weaknesses in terms of firing speed, effective range, magazine sizes, and so on. unlike earthquake II, these weapons need to be reloaded when their clips run out, and if you reload while using a half-full clip, you’ll lose those bullets. They also each have their own unique grenade launcher, which consumes more than half a magazine of bullets per shot.

The Weyland-Yutani vibe is immediate, intense and shameless.

You are only allowed to hold one standard weapon during the game, and your weapon of choice can be boosted with boosts you encounter along the way (magazine size, power, accuracy, grenade power, etc.). Other weapons, including sturdier versions of the ones you didn’t pick, show up as pick-ups, usually with about 10-20 bullets loaded and no way to get more ammo. You’ll also eventually find interesting boosts outside of your weapons, including assistant drones and ways to improve your health or armor mid-run. When you die, all these boosts are lost and you start over from the beginning.

Each of punishmentThe levels always start and end the same way. Every other element is always freshly generated. In punishmentThat means various ’90s-esque hallways, stairwells, corridors, elevators, bridges, caves, and more are continuously remixed and rearranged. The great thing isn’t just that these remixed levels always look slightly different; I honestly can’t recall seeing gigantic pieces that looked identical between sessions. What punishment nailing it so incredibly well is how its monster populations fill these spaces – and how the geometry always makes the most of these stupid foes.

In some cases, you think that nothing brilliant is going on. Throw a grenade into a large room and eight dumb peonies – all of which look like bipedal, hammer-wielding sloths – run straight at you down a large hallway. Pick them off through this funnel-shaped path, and that’s it. Enemies are dead. Oof. What have I heard about the game being so hard?

Then the dangers pile up. Laser-shooting robots are joining the mix, and some of these are good at dodging. Acid-spewing turrets appear at high points of walls and smear the level in permanent, painful pools of orange acid until you take them out. Robo-spider-monkey things adorn the ceilings, hoping to punish you for not picking them out when you may have had a vantage point before. That list only describes the first few levels and doesn’t even consider monster cabinets. Monster cabinets don’t just appear when you least want them, but they’re usually placed so that their monsters can flank you from two or three angles if you’re not careful.

All of these monsters pack a serious punch, so your games will soon end if you’re not careful. Health and armor are generally scarce, with the occasional bonus popping up out of nowhere, and you’ll often find yourself losing 20-30 percent of your total health + armor by not accounting for a single bad guy in your blind spot. The damage you take in one level feels exponentially worse in the next, as you cling to your last few health points and start crawling with your best ammo-low weapon ready in case a random monster closet bursts open.

This brutal difficulty is made up for by weapons that feel very powerful between their damage rates and audiovisual punch. punishmentis blocky, Unreal 1Monsters of the era were screeching and bleeding everywhere, and their cardboard robot designs blast with staggering mutilation with all your weapons. And power-ups and bonuses appear with a nice clip; for example, if you’re about to drown in desperation, you might stumble upon a second barrel for your shotgun. Plus, the tuning of all your actions – your jumps, your default running speed, your firing speed, the bang and the impact of weapons – just feels right, just like how super marioRunning, jumping and descending all feel instantly controllable. almost immediately, punishment makes it clear that you can be a badass. You know, before you kill yourself.

No to gamepads – or people with high blood pressure

While punishment doesn’t look as gloomy and gloomy as earthquake, it certainly keeps its color palette limited and its textures downright crappy. You can play the game in 4K resolution if you want (we did), but punishment looks intentionally dated and pixelated. I found that these images were ultimately easy to read, thanks to bright flashes of light and hazards like acid baths, and I was able to navigate my way through levels where I’d left large piles of dead bodies. However, I saw players get lost in these randomly generated levels thanks to lots of repeating brown and gray textures and walls. (An optional mini-card doesn’t really help.)

Note: A gamepad is a bad idea here because punishment requires a lot of fast movements and nervous reactions. I’ve tried tweaking and changing the gamepad’s settings to make the game work, and I’m happy to play some first-person shooters with an Xbox-style pad. But not this one.

punishment severely lacks enemy variety per ‘world’. This becomes noticeable as you try, and try, and try again to beat the first world, which consists of three levels. Getting used to punishmentThe flow of challenge spikes and monster placement only lasts for a while, and you’ll see those robots and lemur humans over and over along the way.

But I still think the hostile variety is enough to propel players forward, mainly because of how punishmentThe combination of powers, levels and enemies makes players feel powerful and weak at the same time. Every day during my review period I enjoyed booting in punishmentwith a few 20 or 30 minute runs that each felt equally nostalgic and fresh, and moved on to other things.

I don’t necessarily have the urge to reload earthquake‘s E1M5 on a regular basis. (And Gloom Keep is badass, I admit.) to do like the idea of ​​that earthquake-like the first feeling, of wondering what monster or secret was around every corner. punishment‘s hodgepodge of randomly generated treats and consistent, time-tested FPS power gets me there every time.

verdict: A must-play for FPS addicts of yesteryear and a happy return to solo FPS action for modern teens who missed the ’90s.