Sticking to your diet? This tooth-mounted food sensor could convey the truth | Techilink 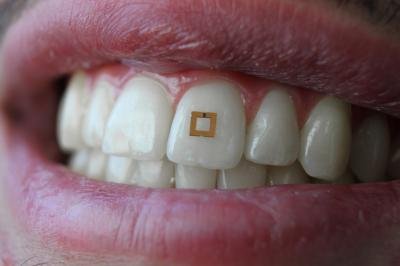 With this latest wearable gadget, you could really sink your teeth into diet and health tracking.

A small sensor mounted on a tooth can wirelessly transmit radio frequency data about the foods you eat, reporting sugar, salt and alcohol in real time. The makers, led by biomedical engineer Fiorenzo Omenetto of Tufts University, hope the dental device will one day help consumers and researchers make “conclusive links between dietary intake and health.” They report their prototype in a study to be published in the journal next week Advanced materials.

Omenetto’s team has long been working on such radiofrequency sensors — those for the skin, brain, and surgical implants. It made sense to go to the mouth, Omenetto tells Ars. “There is a plethora of markers in the mouth that are … highly relevant to our health status,” he said. But when the team talked to the nutrition researchers at Tufts, they thought, “Gosh, wouldn’t it be great if you could track your diet.”

The 2 mm × 2 mm prototypes use their three-layer sensor design for this. It involves a middle layer of bio-responsive material sandwiched between two gold split ring resonators. The bio-responsive layers in the prototypes were either a silk film or a hydrogel. For example, the silk film may contain enzymes or antibodies to detect specific molecules. In doing so, it changes the chemical conditions between the resonators. The hydrogel, on the other hand, sucks up the slurries in your pie hole and swells to different sizes depending on what you chew.

The resonators meanwhile act as antennas, picking up and transmitting ambient radio frequencies. In early tests, the researchers used a portable radio frequency analyzer mounted on a tablet or cell phone to check the frequencies. Those frequencies change depending on what’s going on with the sensor’s bio-responsive layer.

“It’s a passive device,” Omenetto explains. “And you’re essentially pinging it with your phone.”

In initial tests of the hydrogel-containing prototype, Omenetto and his team had undergraduate researcher Logan Garbarini and other volunteers attach it to their teeth. Then they sampled tap water, apple juice, alcohol, mouthwash, and salty soup while donning their grill bling. The dental chip transmitted clear frequency shifts with varying sugar, salt and alcohol intake.

For now, those frequency shifts don’t reveal how many of those foods or ingredients you’ve eaten. “There’s still a big gap,” Omenetto says. But he says that with more data and testing with common foods, he thinks they’re about to build in such specificity and sensitivity.

“We’re pretty far from having the app that tells you, ‘You burned 216.3 calories today,'” he said. “But it’s really not implausible to think that you can get there tomorrow.”