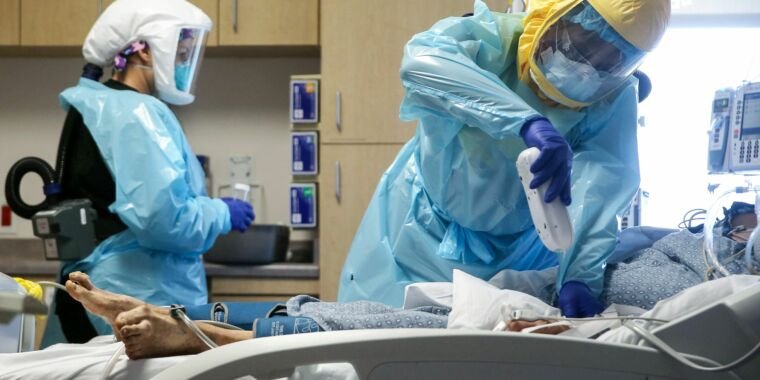 It’s not just beds and medical supplies — hospitals in multiple states are running out of doctors and nurses to handle the deluge of COVID-19 patients.

Military medical personnel arrived in Los Angeles County on Friday to bolster staff at two area hospitals battling the pandemic, according to a report in the Los Angeles Times. The Department of Defense deployed the Air Force’s medical teams after state officials submitted a request through the Federal Emergency Management Agency.

The Times noted that six other hospitals in the state have already received military support in their fight against the novel coronavirus.

Brian Ferguson, a spokesman for the Governors Office of Emergency Services, told the Times that the additional medical staff is “essentially intended to staff hospitals in need.” He noted that struggling hospitals are experiencing spikes in patient numbers and may also be understaffed, possibly because staff themselves have become infected with the pandemic coronavirus.

Further, the two Los Angeles County hospitals that received military personnel wrote in a statement that they will use the personnel “to support the operation of hospital intensive care units amid growing COVID-19 hospitalizations.”

Several other states may soon find themselves in similar situations. According to a recent report by researchers at George Washington University, Arizona and Texas are expected to face shortages of doctors working in intensive care units next month. Researchers estimate that by August, more than 100 percent of the state’s critical care physicians will be needed to care for COVID-19 patients alone.

Eleven other states are struggling with staffing problems, the researchers also reported. That means more than 50 percent of the state’s critical care physicians may need to support COVID-19 patients in the coming months.

“The news media [have] largely focused on hospital admissions and the danger of depletion of the ICU bed supply, but staffing these beds could be an even bigger problem,” the researchers write in the report. “New beds can be placed in other hospital departments, or even outside the hospital environment, but it takes time to find highly specialized ICU professionals.”

The report also noted that the pandemic will also put a strain on current staff, who will have to work more and harder shifts to handle the influx of patients. That, in turn, could lead to more burnout and more infections among healthcare workers.

So far, the United States has reported more than 4.3 million cases of COVID-19 and nearly 150,000 deaths. New cases are currently on the rise in 30 states, according to tracking by The New York Times.