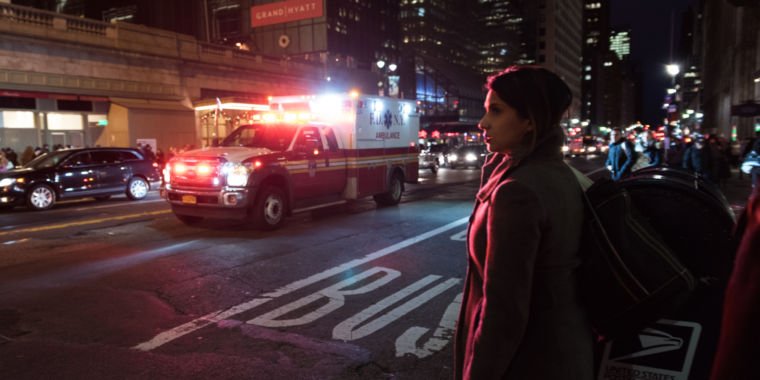 In the midst of air strikes, it is wise to ‘keep calm and carry on’. When it’s on fire, definitely “stop, drop and roll”. And in the event of a stabbing or shooting, it may be best to “brag and run.” At least, that’s the conclusion of a new study in JAMA surgery.

A frenzied sprint to the hospital in a private ride — the scoop and run — may be better for survival than waiting for emergency responders, Johns Hopkins researchers report. In fact, stab and gunshot victims who took their own elevator to the hospital were 62 percent less likely to die than those who called an ambulance.

The finding fits with the obvious fact that time is vital for trauma victims. But digging deeper, it suggests that for people with such “penetrating injuries,” advanced preclinical interventions are of limited value. It can be all about timing. Thus, health care systems can better serve their communities by implementing “scoop and run” policies about “stay and stabilize” for these trauma patients.

For the study, the Hopkins researchers compared transportation methods within urban trauma systems to see if there was a benefit to a private ride. From more than 2 million national trauma patient records, the researchers singled out just over 100,000 with gunshot and stab wounds between 2010 and 2012. The United States.

The researchers looked at the chances of survival before hospital discharge for each patient and came up with a model of the data. They accounted for a variety of factors, especially severity of injury, as well as heart rate, blood pressure, age, gender, race/ethnicity, and insurance status.

The study has limitations. For starters, the records don’t include transit time for those arriving by private vehicle. Thus, it is impossible to directly compare transit rates and determine whether they are the single or largest factor responsible for the difference in survival. That said, the authors argue that private rides are “unlikely” to last longer than using emergency medical services, which means waiting for emergency responders to arrive and receive prehospital care.

But overall, the researchers conclude that there is a clear link between a ride to the hospital and a reduced risk of death from gunshot and stab wounds. They call for more research into whether all health systems should implement a “scoop and run” policy for these patients.

“The purpose of trauma systems is to provide optimal care to injured patients,” they conclude. An important part of achieving this is determining what is optimal care in each trauma system, because it can be different.