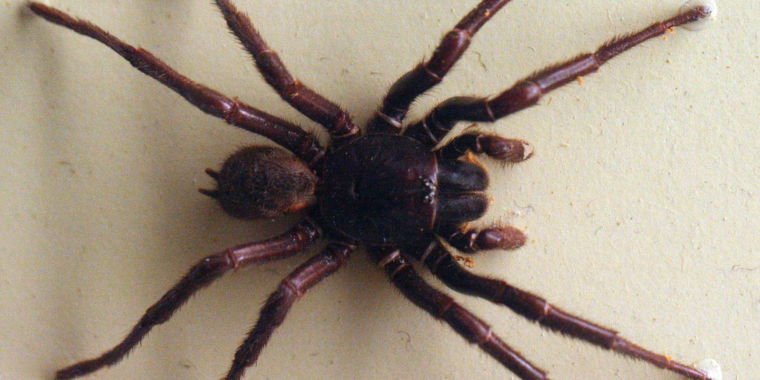 It may not be radioactive, but the venom of a dangerous spider in Australia could help researchers gain the superpower to protect the brain from strokes.

Venom from the Australian funnel-web spider (Hadronic infensa) contains a chemical that closes an ion channel known to malfunction in brain cells after a stroke, researchers report Monday in PNAS. In cell experiments, the harmless chemical protected brain cells from a toxic stream of ions released after a stroke. In rats, the venom component significantly protected the rat brain from extensive damage, even when administered hours after a stroke.

That “translates to improved behavioral outcomes, with marked reductions in neurological deficits and motor impairment.” This is according to the report’s authors, who are researchers at Australia’s University of Queensland and Monash University.

We’re still in the early days for a possible venom-based treatment. Researchers have years, if not decades, of work to figure out whether their specific venom is safe and effective in humans. And very few potential therapies make it. But this early study gives us reason to be somewhat optimistic: It follows years of research and hypotheses that such venom components and their ion channel targets may hold the key to new stroke treatments – which are much needed.

The vast majority of strokes involve a blockage that stops or slows blood flow to part of the brain (other strokes can be caused by bleeding). This leaves the brain cells without fresh blood and oxygen. To cope, the cells can switch to metabolic pathways that do not rely on oxygen. But this creates acidic conditions and the pH outside the brain cells begins to drop rapidly – a scenario called acidosis. In the acidic, oxygen-poor brain regions, brain cells become damaged and begin to die, causing irreversible damage.

The only drug approved by the Food and Drug Administration to treat these types of strokes attempts to restore blood flow by breaking up clots. But this drug is only used in about three to four percent of stroke victims because it must be used within 4.5 hours of the stroke. It also carries the risk of bleeding.

To find a better treatment, researchers are trying to work out all the details of what happens in cells right after a stroke and the formation of acidic conditions. In doing so, they discovered that a group of ion channels called acid-sensitive ion channels (ASICs) play a role. When researchers destroy one type of ASICs – ASIC 1a – from the brains of mice, the rodents experience about 60 percent less stroke damage than normal.

Researchers hypothesize that ASIC 1a can quickly detect small pH changes around brain cells after a stroke, after which they begin to pump. The ion channel conducts calcium ions and when ASIC 1a kicks in it can flood brain cells with calcium. This causes toxic, nasty effects.

Years ago, researchers stumbled upon a chemical in tarantula venom that specifically blocks ASIC 1a. When researchers gave it to rats that had suffered a stroke, it was able to significantly protect their rat brains from stroke-related damage.

In the new study, researchers saw a similar peptide in the funnel-web spider’s venom, which they named Hi1a. When they tested the toxin, they found that it can also inhibit ASIC 1a. But venom is much better at inhibiting ASIC 1a. The chemical is more potent and works faster. In molecular experiments, it seemed to be able to clamp the ion channel shut before it started pumping. In rats, the Hi1a toxin protected up to 77 percent of cells: it rescued tissue in the most severely affected brain regions and limited peripheral damage. In addition, the spider venom showed protective effects in rat brains for up to eight hours after they suffered a stroke. All the while, it showed no signs of harmful side effects.

Overall, the authors conclude that Hi1a venom “is a powerful pharmacological tool for investigating the role of ASIC1a in acid-mediated neuronal damage and various neurological disorders, and a promising entry point for the development of therapies to protect the brain… “