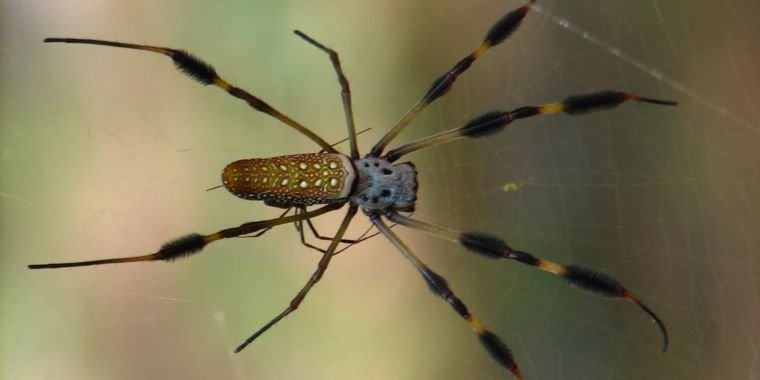 According to the National Human Genome Research Institute, about 300 different species have had their entire genomes sequenced. We, of course, but also rats, pufferfish, fruit flies, sea squirts, roundworms, chickens, dogs, yeast, honeybees, gorillas, chimpanzees, sea urchins, a bunch of bacteria, and all sorts of other birds, plants, animals, and fungi.

New on the list is the orb web spider Nephila clavipes. Analysis of this spider’s genome shows how spider silk has evolved, giving us a better understanding of the whole system and bringing us much closer to our ultimate goal of one day making super strong spider silk to achieve our own goals. (Mwhahaha…)

Spider silk may be “stronger than steel and tougher than Kevlar,” in the words of the University of Pennsylvania researchers who just reported the new genome, “but be much lighter than these man-made materials.” They can conduct electricity, withstand temperature fluctuations, have antibiotic properties and are undetectable by our immune system. Hence our desire to find out how to make them for future medical and industrial use.

Spider silk is made of proteins called “spidroins,” for spinning fibers. The orb weaver genome provides the first compilation of all spidroins in a given species, and it holds some surprises. First, the genome includes eight unreported spidroins for a total of 28.

Historically, when spidroins were discovered, they were named for the specific silk gland in which they were first found. But looking at gene expression revealed that each silk gland produced spidroins for more than one type of silk, and sometimes spidroins appeared in glands that differed from their namesakes.

One of the new spidroins was expressed exclusively in venom glands, suggesting it may have a function “beyond silk-related applications.” Like spider silk, spider venom is a complicated mixture of proteins. The production of both are ancient and defining features of orb-weaving spiders.

Spidroins have a shared beginning and end, but vary in the middle. The center of the protein consists of pieces from a set of 400 different motifs. Each spidroin contains a different combination of these motifs, mixed and matched in different orders and at different frequencies, and this variation gives them specific and different physical properties. This observation confirms the idea that the spidroin genes evolved through tandem duplication events, copying these motifs.

And the beginnings and ends of the molecules, while similar enough to remain recognizable, are more variable than most other genes. These two properties – a hypervariable midsection sandwiched between two moderately variable regions – make for a highly plastic protein molecule that can evolve quite rapidly. The researchers suggest that the spidroin gene family is still evolving, meaning we would likely learn more by looking at the genomes of even more spiders.