SpaceX sent a nerdy Easter egg into space, but can anyone read it? | Techilink 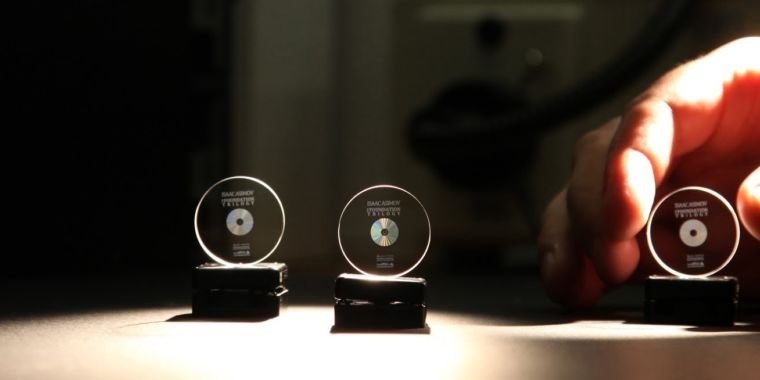 With luck, alien civilizations will one day be able to read the works of Isaac Asimov and tap into his imagined Encyclopedia Galactica. At least that’s the hope.

Tesla wasn’t shy about advertising the launch of a Tesla Roadster aboard a Falcon Heavy rocket on Tuesday. But the company was less vocal about that Roadster’s secret payload: a small optical drive known as an Arch (pronounced “ark”). Theoretically, this drive size can hold 360 TB, and the one on board the launched car includes Asimov’s Foundation book trilogy.

Unlike traditional optical disks, according to the Arch Mission press release, this Arch disk is “written by a femtosecond laser on quartz silica glass” and the data is “digitally encoded as 20nm lattices formed by plasma perturbations from the laser pulses.”

“Each dot encodes 8 bits in 5 dimensions of light,” the group states. “Theoretical capacity is 360TB per drive and the Archs are stable for 14 billion+ years. No other medium offers this kind of data capacity and durability.”

However, the ambitious group was not immediately able to explain exactly how this data could be read by other people who don’t have specialized hardware to access the data, let alone alien civilizations in the future.

“A message to future people”

On its website, the Arch Mission Foundation explains that it hopes future recipients of the Arch can somehow decrypt the device and build the necessary computer to read it. (The Foundation doesn’t explain exactly how other civilizations can understand Earth’s written languages, but they intend to decipher the information as easily as possible.)

“Beyond the visual layer, we also encode higher-resolution data for audiences with access to lasers and computer-based digital technology,” the group writes. “Here we can store really large data sets, but it is more difficult for a receiver to access this data. To facilitate this, we will include on the visual layers above this layer instructions for accessing and decoding digital data, and if necessary how to build a computer and laser to do that.”

The effort is vaguely reminiscent of the Voyager 1 mission in 1977, which featured a visual and audio representation of human civilization on Carl Sagan’s famous “Golden Record.”

The nonprofit Arch Mission Foundation plans to launch many more Archs in the coming years.

Nova Spivack, co-founder of Arch Mission, told Ars that his group plans to ship more quartz disks and other types of storage devices in different media every time a spacecraft is launched.

“We’re trying to send a message to future people,” he said. “We don’t need to teach them physics or math. We want to design objects for those locations; we want to design objects that are purposefully designed for data miners. In that scenario, you want them a lot of data and help them apply machine learning to figure it out what’s in the data The biggest challenge isn’t “Can they get the data?” The question is, ‘Will they understand what it all means?'”