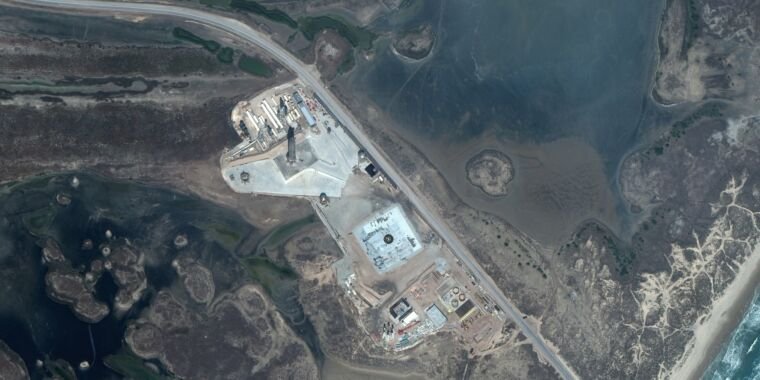 As part of a federal review process for its plans in South Texas, details about SpaceX’s proposed spaceport have been made public. They were posted late last week in a public notice from the US Army Corps of Engineers, asking for public comments on the changes.

Most notably, the new documents include a detailed architectural drawing of the multi-acre site at the southern tip of Texas, along the Gulf of Mexico. The main hardware that exists or will be built includes:

What stands out about this architectural drawing is its compact nature, largely because SpaceX has little land to work with in the facility and must contain stormwater ponds to combat flooding. All of these facilities will be concentrated within a few dozen acres, in stark contrast to more sprawling Florida launch sites at Kennedy Space Center and Cape Canaveral Space Force Station.

However, SpaceX seems confident that it can control the launch and landing of its vehicles so that any accidents do not seriously damage nearby equipment. This is a non-traditional and potentially risky gamble, but SpaceX has always been willing to take risks during development programs in order to act faster.

All inclusive on Texas

These detailed plans also provide more evidence that company founder Elon Musk is all-in on Texas for the future of SpaceX. These four launch pads, coupled with the acquisition of two oil rigs named Phobos and Deimos, give an idea of ​​the company’s operational capabilities.

The plan is likely to perform launches from South Texas and land vehicles on these modified platforms, and to fly Starships on suborbital hops from South Texas to these platforms for orbital launches. This will effectively provide the Starship Launch System with four orbital launch pads — and possibly a fifth if SpaceX continues to work on on-site changes at Kennedy Space Center.

The US Army Corps review isn’t the only regulatory process underway in South Texas. In addition to complying with the Army Corps of Engineers, SpaceX also undergoes an environmental assessment by the Federal Aviation Administration. Since its initial acquisition of the South Texas launch site in 2014, the company’s planned scope of operations has expanded dramatically, from approximately 10 Falcon 9 launches per year to launches of the massive Starship vehicle. SpaceX is working to provide the FAA with an updated environmental assessment that the federal agency will then evaluate.

Musk has also proposed incorporating the nearby Boca Chica Village into a new town called Starbase, Texas. Such a city should have at least 201 inhabitants and follow state rules for inclusion. Before the advent of SpaceX, the tiny Boca Chica community consisted of a few dozen homes. Somewhat controversially, in recent years, the company has attempted to buy out or otherwise evict residents so that it has more control over its launch operations in the neighborhood.