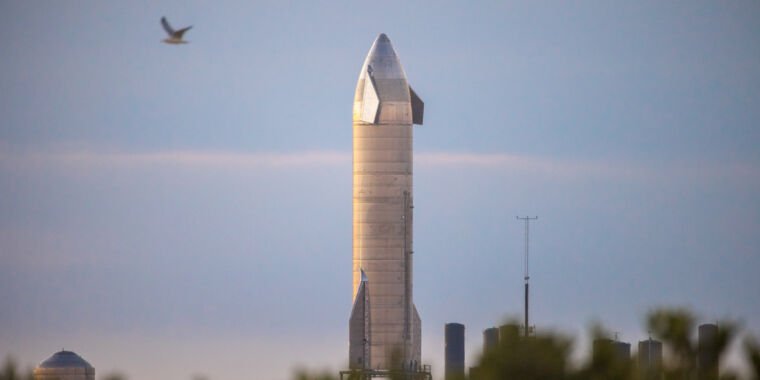 Update 3:45 PM EST: The SN10 Starship prototype nearly launched from South Texas on Wednesday afternoon, but a last-second out-of-bounds read aborted the attempt. The abort was caused by a “somewhat conservative high thrust limit,” SpaceX founder Elon Musk said afterwards. Basically, the onboard computer received data from one of the engines that it was producing more thrust than expected.

The good news? This thrust limit can be adjusted upwards in the flight software and the vehicle now recycles through propellant charge for another attempt. SN10 can still fly today, time to be determined.

With this vehicle, the company will attempt to successfully land the Starship vehicle where the last two versions, SN8 and SN9, each failed in the final seconds of the mission to stabilize themselves for a controlled landing. Both flights ended in fire at the landing site. SpaceX founder and chief engineer Elon Musk estimates about a 60 percent chance of success this time around — suggesting the chance is slightly higher than that, given his tendency to set expectations.

As with the previous two flights, which took place in December and early February, SpaceX will launch its Starship vehicle to an altitude of about 10 km under the power of three Raptor engines. There it will switch from its main propellant tanks to smaller ones at the top of the vehicle and perform a “belly flop” maneuver, reorienting itself to simulate returning from orbit. This allows Starship to both blow off speed and ensure its reusability without a massive heat shield.

The challenge will be to successfully re-ignite at least two of the three Raptor engines close to the ground to slow the vehicle’s descent and make a controlled landing. Either way, there will be entertainment guaranteed.

SpaceX has already received approval from the Federal Aviation Administration for this launch, and the window will open at 9 a.m. (15:00 UTC) local time in South Texas. As always, preparatory activities are likely to delay testing further into the window, and there may be unscheduled holds or the need to defuel and refuel as part of the testing program. But the weather looks great, with clear and sunny skies in South Texas.

The test comes a day after Yusaku Maezawa announced an update to the “dearMoon” mission he purchased on Starship. This flight sends the Japanese billionaire and about 10 other people on a ride to the moon and back for a mission of about a week on Starship. This is expected to be the first human flight beyond low Earth orbit on the vehicle and should go farther from Earth than any previous human mission.

Maezawa said he was holding an online contest to “join the crew” and welcomed people to sign up. He will choose “talented” and “creative” people who want to inspire others about space, share the journey with those on Earth, and are willing to be good crew members.

The video announcement included some comments from Musk about Starship’s readiness for a mission that could launch as early as 2023. people transport by 2023,” Musk said. “It looks promising.”

We’re not quite sure of the 2023 date, but it sure sounds nice. Maezawa admitted he was a little nervous about the flight, but said he was more curious to find out what’s out there. None of this, of course, will happen until SpaceX flies safely to orbit with Starship dozens of times. The iterative steps toward that goal will continue with Wednesday’s flight test.