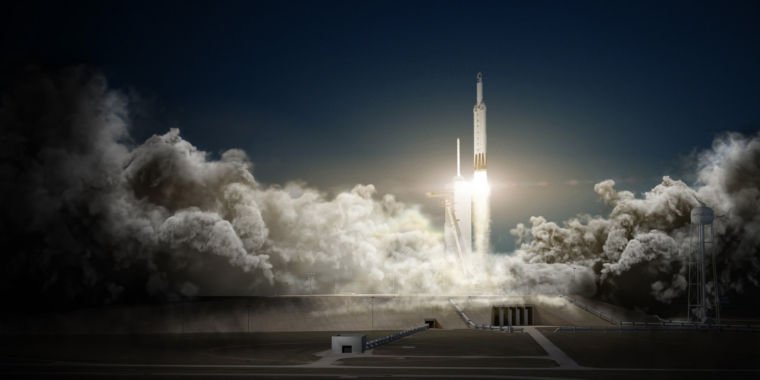 SpaceX announced Monday that it plans to send two private individuals around the moon by the end of 2018. This highly ambitious flight would mark the first human return to deep space in nearly 50 years. On a conference call with reporters, SpaceX founder Elon Musk said the two humans would fly a mission of about a week in a “long loop” around the moon, reaching about 400,000 miles from Earth, before returning home.

Musk said the company would launch its Dragon 2 spacecraft atop a Falcon Heavy rocket and the two passengers would fly solo, without the help of professional astronauts. Dragon 2, he said, is designed as an autonomous vehicle. The paying customers would not be blind to the risks, he added. “I think they’re going into this with their eyes open, knowing there’s a risk here,” Musk said. “They are not naive. We will do everything we can to minimize our risk, but the risk is not zero.”

SpaceX has a history of making big statements without always following through on them. Last fall, Elon Musk talked about the company’s Mars ambitions, and now, a few months later, is he talking about the moon? Still, there seems to be a method to the madness, and such a daring plan to fly two people around the moon is theoretically feasible.

SpaceX is first and foremost a company. To achieve its ultimate goal of colonizing Mars, it must remain profitable. While Musk didn’t disclose the amount of the lunar flight, he said he could envision the company making one or two such flights a year and bringing in perhaps 10 to 12 percent of the company’s revenue. (In 2016, SpaceX raised $1.8 billion in revenue from launches). As it always has, SpaceX is taking the profits it makes from spaceflight and converting them into more advanced technology, with its long-term focus solely on Mars.

Moon tourism helps SpaceX make continuous use of its new vehicles, including the Falcon Heavy and Dragon 2. The company’s plans for a Red Dragon mission to launch on a Falcon Heavy to Mars have already been pushed back to 2020, so a lunar flight would that 2018 may fill launch slot. This also provides another destination for the Dragon 2 spacecraft, which NASA paid for as part of its commercial crew program to transport the astronauts to the International Space Station.

A launch in 2018 is still ambitious. It requires the oft-delayed Falcon Heavy to actually fly. (The powerful rocket may finally make its first launch this summer). Moon tourism also requires SpaceX to complete the Dragon 2 spacecraft, as Musk said SpaceX would definitely fulfill its NASA contract and fly astronauts to the station before any tourist flights around the moon.

During the call, Musk said he still expects the Dragon 2 to test fly with NASA astronauts in early 2018. He expects the Dragon 2 to begin operational missions later that year. However, to guard against further commercial crew delays, NASA is considering purchasing Russian Soyuz seats for launches in 2019. In other words, NASA is not confident in SpaceX’s timeline for commercial crews, which could affect Dragon 2’s lunar readiness in casts doubt. tourism in 2018.

SpaceX’s announcement comes shortly after NASA revealed it is considering launching a crew of two astronauts on the maiden flight of its Space Launch System rocket in 2019. This flight, Exploration Mission-1, would have a similar flight profile to SpaceX’s lunar tourism. Both would send spacecraft past the Moon in a free return orbit before returning to Earth in about a week. While SpaceX would use its Dragon, NASA would use its Orion.

While SpaceX does a lot of business with NASA through the agency’s commercial crew and cargo vehicles, the private company and government agency nonetheless compete when it comes to deep space exploration. NASA has maintained that while it has opened up low Earth orbit to private companies, it must take the lead in deep space exploration. However, the private space industry has criticized the agency for spending lavishly on developing the SLS rocket and Orion spacecraft, which account for more than $3 billion annually in NASA’s budget.

In addition, some members of the Trump administration’s transition team pushed for heavier commercialization of the space agency when they reviewed NASA spending early this year. But so far Congress has remained steadfast in its support for government vehicles, the SLS missile and the Orion.

Speaking to reporters, Musk tried to distance his company from any competition with NASA. “I think we generally encourage anything that promotes space exploration,” Musk said. “I think an SLS/Orion mission would also be exciting. And I don’t know what their timetable is. But I’m not sure if we’ll be before or after, but I don’t think that’s the most important thing. I think what really matters is the advancement of space exploration.”

Significantly, Musk left the door open for NASA to carry out the mission with the Falcon Heavy and Dragon 2 as clients. “If NASA decides they want to do the first mission to orbit the moon, of course we’ll give them priority,” Musk said. In other words, if NASA decides it doesn’t need the SLS or Orion, we’ll fly the mission for them.

So how will NASA feel about this? Ars reached out to a few agency veterans after Monday’s announcement. Their reaction was somewhere between amusement and bewilderment. These sources noted that SpaceX has had two accidents with its Falcon 9 rocket in the past two years and that the company has yet to fly the Falcon Heavy. In addition, both SpaceX and Boeing are grappling with the technical hurdles of getting two astronauts safely to the space station, let alone fly far beyond the moon. In short, expect skepticism from the space agency.

The Orion spacecraft may nevertheless be vulnerable. NASA is currently funding Orion for deep space and the SpaceX Dragon 2 and Boeing Starliner commercial crew capsules. Does the agency need all three capsules? NASA says yes, because Orion has the special ability to fly deep into space and then safely return to Earth under the higher speeds of the return to the Moon.

But on Monday, Musk said Dragon 2 could also come back from the moon. “The heat shield is pretty over-designed,” he said. Musk also said the vehicle was sufficiently hardened against radiation to keep the crew outside of Earth’s protective radiation belts. Dragon 2’s systems are “triple redundant,” Musk added, and the only major upgrade needed would be the communications systems.

Pushing the idea that its Dragon spacecraft could essentially fly the same mission as Orion for much, much less than the government, SpaceX is boldly telling the Trump administration that the private sector could get the job done if Orion is out of the space agency would be scrapped. budget to save costs.

While no government payload would be involved, SpaceX would still eventually need the permission of the US government to fly its lunar mission. The Federal Aviation Administration would have to grant the company a launch permit. Michael Listner, a lawyer and publisher of the space law publication The Precissaid it won’t be easy.

“Given the high risk of such an undertaking, the FAA could deny Musk the permit,” Listner told Ars. “Then there are other factors to consider[…] the PR disaster if the mission resulted in fatalities. Given the ambitious 2018 schedule and the fact that the commercial crew hasn’t even started yet, it’s highly unlikely that Musk will get the green light for 2018.”