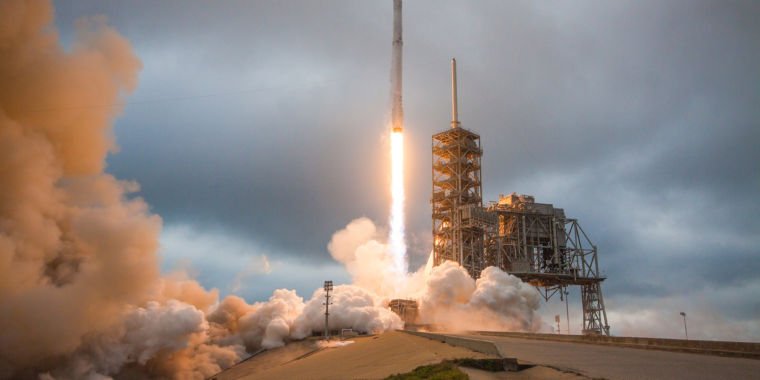 Update Wednesday 7:45 p.m: Under brilliant blue skies, a spent Falcon 9 rocket launched on Wednesday, carrying its payload into orbit, then the first stage returned to land on a drone ship in the Atlantic Ocean. About 30 minutes later, the rocket’s upper stage put the EchoStar 105/SES-11 satellite into geostationary orbit. The third flight of a used Falcon 9 booster was apparently flawless.

The highlight of Wednesday’s mission is the company’s reuse of a previously flown first-stage booster. This rocket first flew in February when it launched a cargo resupply mission to the International Space Station and then returned to a landing area along the Florida coast.

This is only the third time SpaceX has launched a so-called “flight-proven” booster. Luxembourg-based satellite operator SES is one of SpaceX’s most loyal customers, having previously used a used booster. SES has repeatedly expressed confidence in the rocket company’s ability to make reusable launch technology safe. And with three successful reuse flights, it will likely make it easier for SpaceX to find customers for future “flight-proven” rockets.

A successful launch Wednesday would also be a continuation of what has been a remarkably productive year for SpaceX in terms of overall launches. Wednesday’s launch would mark the company’s 15th flight of the year, and it would keep SpaceX on pace for 20 flights this year, likely allowing the California-based company to fly more orbital rockets this year than any other company or country across the globe. whole world.

The webcast for Wednesday’s launch attempt should start about 15 minutes before the launch window opens. After the rocket’s first stage carries its payload into orbit, it will attempt to land on a droneship, Of course I still love you, at 8 minutes and 33 seconds after launch. The satellite will deploy into its high-transmission orbit about 36 minutes after launch.