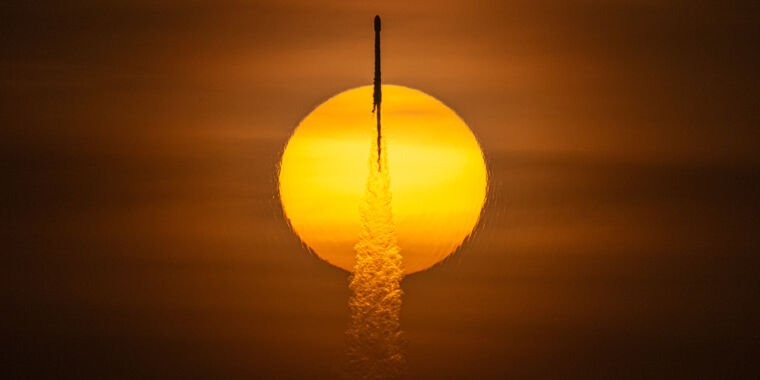 SpaceX has been trying to get its twelfth batch of operational Starlink satellites into orbit for some time now.

The company’s first attempt on Sept. 28 was scrubbed by thick clouds over the launch site at Kennedy Space Center. A second attempt on October 1 reached 18 seconds after launch before a problem with ground systems delayed the launch. When we finally addressed that problem, the bad weather on Monday morning caused another delay.

But the fourth time proved its charm for SpaceX on Tuesday morning, when the company’s Falcon 9 rocket took its payload from 60 Starlink satellites off track and into space shortly after the sun rose over the Florida coast. With Tuesday’s mission, SpaceX has now launched a total of 775 Starlink satellites, though most of the original 60 prototype satellites have since disappeared from orbit.

Our on-site photographer in Florida, Trevor Mahlmann, focused his shot to capture the rocket ascending into space as it flew over the surface of the sun. In the resulting image, the shock waves from the launch are particularly pronounced.

After weeks of scrubbing due to weather and technical issues in Florida, both at Kennedy Space Center and Cape Canaveral Air Force Station, it was nice to see rockets flying again.

There should be plenty more to come. United Launch Alliance has yet to reschedule the launch of its NROL-44 mission on a Delta IV Heavy missile, but it is set to take place later this month. And SpaceX also has a busy October manifesto, with the GPS III mission to be moved, possibly another Starlink launch, the NASA Crew-1 mission on Halloween, and a previously undisclosed launch for the National Reconnaissance Office, now scheduled for October 25.