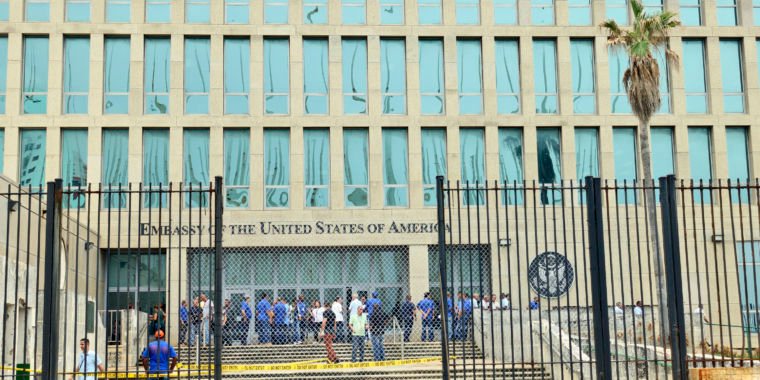 On Thursday, the Associated Press released the first audio recording of the sound some diplomats say they heard during mysterious attacks in Havana, Cuba. Those attacks have so far left 22 Americans with a puzzling array of symptoms, from brain damage to hearing loss.

The sound is high and abrasive. You can listen to it here (but beware: it’s unpleasant).

The sound consists of 20 or more different frequencies, all around 7,000 Hz and 8,000 Hz. It reportedly came in abrupt pulses of varying lengths.

Not all of those attacked heard the sound. Some heard nothing and others heard variations. But several people involved told the AP that the recorded sound was consistent with their experience.

The recording is being investigated by US intelligence agencies and the US Navy, which can perform advanced acoustic analyses. The version released by the AP has been enhanced to increase volume and reduce background noise, but is otherwise unchanged.

When and where the recordings were made is unclear, but the AP reports that the recordings “do not contain significantly advanced American knowledge about what harms diplomats.”

As the AP points out, the recording may not be a complete picture of what the victims of the attack experienced. Standard recording equipment may not pick up very low or very high frequencies. And researchers may be investigating whether ultrasound or infrasound is involved.

However, the recording is used for training. To know what to look out for in the event of a subsequent attack, employees of the American embassy, ​​where part of the attacks took place, listened to the recordings. If they hear it, officials are advising them to move quickly to a new location, as it is unlikely that the targeted attacks will be able to follow them. In previous attacks, victims said the sound was confined to a room or part of a room.

The most recent attack took place in late August.

Investigators would investigate a range of possibilities, from faulty, covert recording equipment to sonic weapons, electromagnetic pulses, or some other unknown, high-tech device.

Last month, the US State Department pulled more than half of its embassy staff over security concerns.