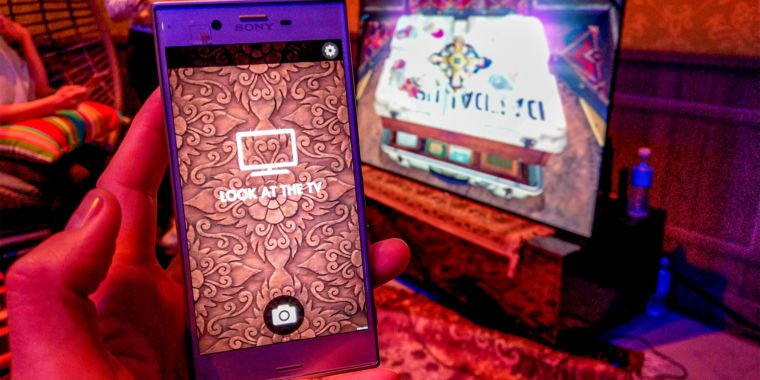 You’d be forgiven for wondering what the Sonys are? PlayLink is. It’s rumored to have been pulled from the publisher’s E3 2017 press conference at the last minute due to Wi-Fi issues (an issue the poor souls trying to live blog the event can confirm), PlayLink was instead pushed out via a press release, after which it was completely absorbed into the maelstrom of E3. That’s a shame, because Sony’s latest take on the so-called ‘second screen’ experience – which involves playing games with phones and tablets alongside a TV and a PlayStation 4 – is a lot of fun, as long as you have a few like-minded friends to play with. .

Using a phone or tablet to enhance a movie, video game or TV show on a big screen is certainly not a new idea, although it hasn’t exactly taken the world by storm either. The feature has all but disappeared from the PlayStation Vita, while its most talked-about use on the Xbox (where it’s called Smartglass) died a death alongside Lionhead’s fable legends.

PlayLink differs in that it is not an add-on to an existing game, but is a collection of smaller party games designed explicitly for group play – a bit like the Jackbox series of trivia games, but much more involved. Up to five players, each with their own Android or iOS device and a copy of the free PlayLink app-can play together. All you need to do is make sure they are all connected to the same Wi-Fi network.

There are five games in the PlayLink lineup, with more promised in the future. Of those five, That’s you!– a comedy quiz that asks how well you really know your friends – is the one you should try, if only because it’s free for PlayStation Plus subscribers when it arrives on July 4.

That’s you!like most PlayLink lineup, starts by asking you to take a selfie, which you then manipulate in various ways to make yourself look impossibly beautiful or hilariously disfigured. As you can imagine, my group at Sony’s E3 booth went for the latter. That’s you! then becomes an unusual quiz along the lines of Sony’s classic Fuss! games, dating back to the PlayStation 2. Questions (of which there are over 1,000) are displayed on the TV (devices say “watch the TV” when not in use). Each player uses their device to select an answer.

Early questions such as “Who laughs the most at a teacher’s lame joke?” act as icebreakers, while later questions like “Who is most likely to make love to a stranger at a carnival?” bring a more daring, albeit still family-friendly edge to the game. Players get points for choosing the most popular answer and can double it by throwing in one of a limited number of betting chips. Later rounds use smartphone cameras, asking one player to strike a certain pose while another takes a photo. Our “volunteer” was asked to pose with a so-called trophy, after which we were instructed to draw this trophy in the picture. Whoever was voted to have the best drawing got points.

I know what you’re thinking, and yes, it’s possible to scribble whatever you want in a photo. And yes, a few pints in there, I can imagine it would be hilarious.

PlayLink also makes clever use of other smartphone technology. In the board game Frantics, players must complete a series of mini-games, which are brought to life through a group of charming 3D animal characters. Games include trying to parachute through the air to get to safety while frantically passing dynamite bars between players, or trying to balance on a platform of ice while dodging punches from other players. Each minigame is controlled using your smartphone’s gyroscope and accelerometer, which is surprisingly responsive.

While the mini-games won’t win prizes for originality, they’re a lot of fun. The skydiving is particularly entertaining, especially since the explosive dynamite is so easily passed from player to player by bumping into each other. Another nice detail is the host of Franticsa cunning British fox, who can dish out secret missions by calling one of the players directly on his or her phone or by sending a pseudo text message (in my case, the quest to stop one of the other players from getting a mini game won).

Another game called a standard trivia quiz Knowledge is power, was perhaps the least interesting of the bunch, but was somewhat cashed in by the slick images and the fact that you can dress up as a hot dog for your selfie pic. In the meantime, SingStar Celebration is the same karaoke masterpiece you may remember, only this time you can get the SingStar microphones and use your smartphone instead.

The couple’s last match is hidden agendaa narrative detective thriller by Until sunrise developer Supermassive Games. The idea behind the game supposedly came from players shouting out the answers to various decisions in the game Until sunrisea game that was never designed as a multiplayer experience. hidden agenda tells the story of a serial killer known as “The Trapper” who sets traps on victims’ bodies. You play as a detective and prosecutor who have to track down the remaining victims.

Like Until sunrise, you get choices during each scene. Do you run or save the hostage? Are you kind and gentle during an interrogation, or strong and powerful? Each choice is presented to the group, with the most popular being played out. Since every character in the game can potentially die, the choices you make have a major impact on the game. But not every player works towards the same goal, with the game laying out a ‘hidden agenda’ for a particular player. At the end of the game, the group has a chance to identify the mysterious player for bonus points.

hidden agenda is a short game, but given the multitude of different choices and secret missions, one with substantial replayability. The quality of the voice acting and animation helps too, even if the story itself is a rather chintzy affair.

That said, I doubt many will play any of the PlayLink games expanded when there are much more compelling reasons to boot a PS4. But as party games go, the PlayLink series is a lot of fun and more accessible for people who are not familiar with the ins and outs of a DualShock 4. Prices have yet to be announced, but we’re hoping to get them under $10/£10. That’s you! will be released on July 4th and the other minigames should be released later this year.