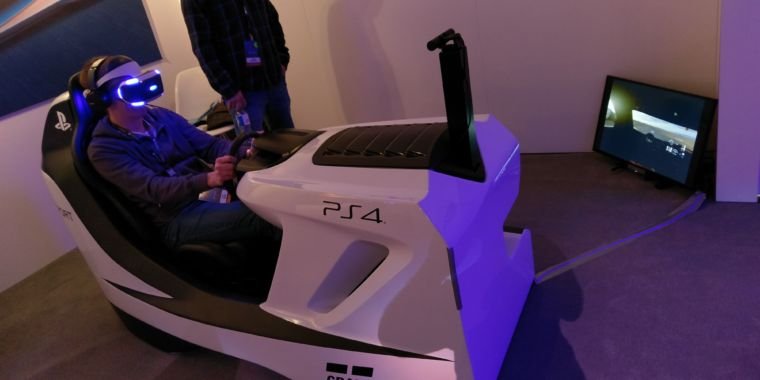 ANAHEIM, Calif. — HDR, or high dynamic range, has finally started rolling out on a large scale this year, thanks to compatible hardware, games, and videos also rolling out en masse. But how long ago did HDR content really start coming in the pipeline?

On Saturday, one of Sony’s most esteemed game producers, Gran Turismo Series creator Kazunori Yamauchi told reporters that his team at Polyphony Digital was the first to be in charge of HDR content within Sony. Surprisingly, Yamauchi-san also said that his team, the designers of the 2017 racer Gran Turismo Sportmade those plans before the PlayStation 4 Pro even existed, in mid-2013.

“Gran Turismo Sport may be the first video game to start development and is of course based on HDR and wide color compatibility,” Yamauchi said through an interpreter during an interview at the PlayStation Experience event. “We were planning to do HDR, or PS4 Pro may or may not come out.”

As Ars Technica reported earlier this year, the original PS4 hardware launched with an easily upgradeable HDMI controller. This proved important for one of the most unobtrusive upgrades to the default console, tucked into a November patch: immediate compatibility with the HDR-10 standard, which supports 10-bit color, a wider color gamut, and a higher luminance maximum than the “100- nit” brightness standard of SDR (Standard Dynamic Range) monitors and TV sets.

PS4 owners will still need to hook up their older consoles to newer displays that support HDR-10, but in the process they’ll be presented with what Yamauchi describes as “car colors that previously couldn’t be displayed on standard televisions.”

To make his point, Yamauchi simultaneously loaded development builds from Gran Turismo Sport on two TVs: a 75-inch ZD9 TV with HDR-10 support and another 75-inch TV that only supports SDR. The difference in color rendering was unmistakable. A Ferrari 458 Italia enjoyed a full throttle, Ferrari-grade red on the HDR screen, and a McLaren smothered in “tarocco orange” paint enjoyed an intensity of orange that simply couldn’t be matched by the nearby SDR screen. (“This is the actual color,” Yamauchi said, gesturing to the HDR screen.)

Ars Technica couldn’t independently confirm the color matching and other setting options on both displays, but milder colors and lights in the SDR range looked the same on both.

In addition, the developers played “replay” roles of the exact same cars, racetrack and camera angles on both screens, and the HDR-10 difference was re-spoken. This was mainly due to the way the game displayed bright headlights on the HDR screen. Rather than adding a giant, cloudy plume of brightness around a headlight, the HDR version simply increased the brightness at the individual headlight tip. Not only did this allow for more natural bursts of light, but it also preserved the intense, electrical peak of color in yellow, orange, and red light. (The luminance limits of SDR displays get really dazzling once bright bursts of color enter the equation.)

I also got to taste Gran Turismo Sports’s VR build at PlayStation Experience, which Sony representatives admit has only been in serious development for “four months.” It certainly feels that way, thanks to an unfortunate mix of paltry graphics quality and uneven frame rates.

Either one can be forgiven separately, but the combination is harder to swallow. The PlayStation VR build, running on standard PS4 hardware, was attached to a modified steering wheel and cockpit setup, and I strapped myself to whip around a shorter iteration of the series’ Willow Springs racetrack in a few cars, without other opponent cars on the track.

The demo defaulted to a bizarre auto-brake setting, which allowed me to leave my foot on the throttle and slow down comfortably when approaching a hard corner at too high a speed. Seeing that I didn’t want to play anything arcadey, I dove into the settings and turned off the auto-braking tweak, then found out the coolest part of Gran Turismo Sport VR: a rock solid system to manage feelings of unease and nausea.

The sole representative at Sony’s GT sport VR station was unable to answer questions about exactly why the mode felt so comfortable even when my car was hurtling around corners, spinning out and crashing over uneven terrain. I didn’t notice any improvement in peripheral vision a la Ubisoft’s eagle flight, nor did I feel that the cockpit view of the racer was better or worse than other VR racing games I’ve played (whose cockpit racing options often made me sick). The best I could say is that the cockpit started out with a particularly dark contrast, and other PlayStation VR developers have told Ars that this trick is proving to be surprisingly useful.

With automatic boosts turned off, and Gran Turismo Sport‘s polished physics and handling engines turned on, I found myself excited by the sheer feeling of speed and power behind the wheel. This was helped in no small part by feeling like I was actually driving a Mazda LM55, whose narrow-body cockpit had been impressively recreated.

But this mode, which Sony representatives said is handled by a separate division at Polyphony Digital, clearly has a long way to go in the development oven. Here’s to hoping the rest of the VR mode elements can always catch up GT sport finally launches “sometime in 2017.”