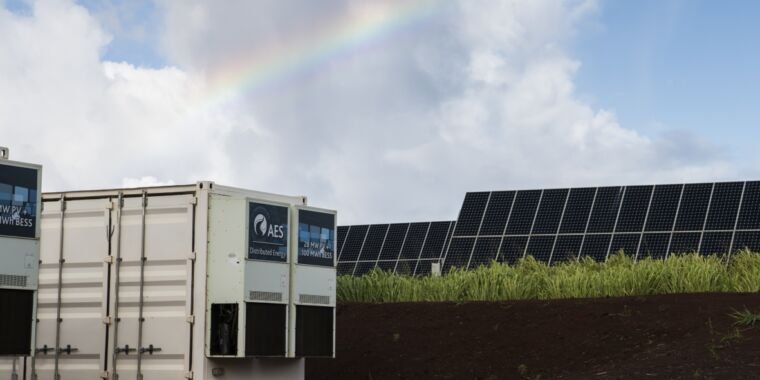 The decline in battery prices allows the integration of batteries with renewable systems in two contexts. First, the battery serves as a short-term power reservoir to smooth out short-term fluctuations in renewable energy output. In the other, the battery holds power for when renewable energy production stops, as solar does at night. This works fine for off-grid use, but it adds some complications in the form of extra hardware to convert voltages and currents.

But there’s actually an additional option, one that merges photovoltaic and battery hardware into a single, unified device that can have expanded storage capacity. The main drawback? The devices have either been unstable or have terrible efficiency. But an international team of researchers has put together a device that is both stable and with an efficiency competitive with silicon panels.

How do you integrate photovoltaic cells and batteries? At its simplest, you make one of the electrodes that draws current from the photovoltaic system to the electrode of a battery. Which sounds like a big “well, duh!” But integration isn’t nearly as easy. After all, battery electrodes have to be compatible with the battery’s chemistry – for lithium-ion batteries, for example, the electrodes store the ions themselves, so they must have a structure that allows this.

So the researchers used a completely different kind of chemistry. Flow batteries use solutions of two chemicals that can undergo charge exchange reactions, allowing them to shift between two chemical states. The battery actually borrows those charges to produce current when discharging, or it pumps the charges back in to move the chemicals into their alternate state, charging the battery. Flow batteries have the advantage that their total storage capacity simply depends on the total volume of solution you use.

While there are many chemicals that can work in a power battery, the researchers started with their photovoltaic system and used that to choose the battery’s chemistry.

Even here they didn’t really use off-the-shelf hardware. Silicon was involved, but it was part of a two-layer solar cell. In this arrangement, one photovoltaic material absorbs a range of wavelengths that are not absorbed for a second; the first layer, on the other hand, is transparent to the wavelengths absorbed by the second. This allows a single cell to absorb a much wider range of wavelengths than would otherwise be possible, increasing overall efficiency.

For their device, the bottom layer was silicon. On top of this is a layer of perovskite photovoltaic material. Perovskites are a potential next-generation solar material, useful because they are made from inexpensive ingredients and can be made simply by evaporating a solution of the perovskite. Unfortunately, these chemicals also have a tendency to decay, which has resulted in a short lifespan in many experimental setups. The researchers here aren’t trying to solve all of these problems; they just use a perovskite-on-silicon photovoltaic setup and try not to run it long enough for chemical decay to become a problem.

The main concept of the researchers was to start with this photovoltaic material and tailor the battery chemistry to its properties. Photovoltaic cells have a voltage, based on the bandgap (the voltage difference between the insulating and conducting states of their electrons) of the materials from which they are made. Batteries also have a potential measured in volts, based on the energy difference between the two chemical states that power them. Adjust these tensions, the researchers reasoned, and you’d have a much more efficient system.

So, using data from their photovoltaic hardware, they were able to identify a current battery chemistry with a potential that matched the voltage. (The actual chemistry involves reactions between two different organic molecules, bis-(trimethylammonio)propylvilogen and 4-trimethylammonium-TEMPO. As I’m sure you’d ask.) The reactions that put these chemicals between their two states are fast enough that they occur in the absence of catalysts, which simplifies the use of electrodes.

Which is important, as another problem with flow batteries is that their chemicals tend to react with many photovoltaic materials as well, which would shorten the life of these devices quite drastically. So the researchers covered the silicon with a thin layer of gold, which was both conductive and inert. It is clear that a cheaper inert metal would be preferable if it went into large scale production.

Past records for a solar battery show the compromises these devices faced. The researchers used a measure of efficiency called solar-to-output electricity efficiency, or SOEE. The most efficient solar power devices had reached 14.1 percent, but had a short lifespan due to reactions between the battery and photovoltaic materials. More stable ones, which had a lifespan of more than 200 hours, only had SOEEs in the range of 5 to 6 percent.

The new material had a SOEE of 21 percent — about the same as solar cells already on the market, and not far from the efficiency of the device’s photovoltaic hardware itself. And their performance was stable for more than 400 charge/discharge cycles, which equates to at least 500 hours. While they could eventually perish, there was no evidence that this happened during the time they were tested. Both are very, very significant improvements.

Obviously, given that both batteries and photovoltaics can last for decades, 500 hours should not be considered a definitive test, especially for a device proposed to enable off-the-grid electrical production. But the demonstration that voltage matching produces such a big efficiency gain should allow researchers to identify a wider range of battery and photovoltaic chemicals that have improved efficiency. If successful, researchers can then look for stable configurations. Whether all that is compatible with low cost and mass production will be the crucial question. But at this stage of the renewable energy revolution, it can only be good to have more options to explore.