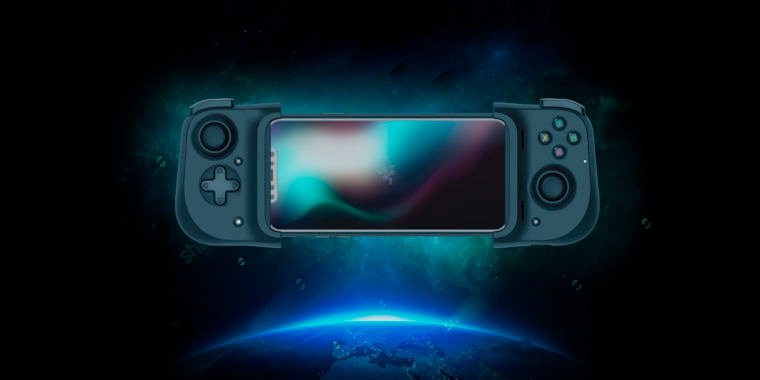 What does it take for a phone-compatible gamepad to grab our attention in 2020, in a world where just about any Bluetooth-enabled game controller can connect to your favorite iOS or Android phone? At this year’s CES, Razer has the answer: a controller that can amplify the cloud streaming proposition of “triple-A gaming anytime, anywhere.”

The Razer Kishi, announced Tuesday at this year’s Consumer Electronics Show, probably doesn’t look special. It features the same array of joysticks, buttons, and triggers you’ll find on most consumer-grade game controllers. The trick to splitting in half and sandwiching a smartphone has been done before — with Razer already having its own Junglecat controller doing just that.

But the Kishi adds a rare combination for this kind of gamepad: a flat fit for your smartphone of choice and a wired connection.

This works by connecting to your phone’s bottom charging port, meaning you’ll need an iOS device or an Android phone with a USB Type-C port in the center of one of the sides. (Razer will eventually sell two versions of the Kishi, one with a Lightning connector and one with USB Type-C.) We haven’t received exact dimensions yet, but CES testing of the device revolved around the Pixel 3a XL, which a 76mm wide and 8.2mm deep. As seen with a Pixel 3a XL, the Kishi seems to fit well, especially as it relies on an elastic band on the back to fit the two halves of the controller against a phone. We’ll have to wait and see if smaller devices fit just as well or if the Kishi slips and slides while attached to smaller phones.

Less Bluetooth in the cloud?

Even if questioned, we’re intrigued because Razer’s new device, slated for “early 2020,” is the least cluttered wired gamepad we’ve ever seen. In an era of cloud gaming, that matters.

While testing early gaming-on-the-cloud services, most notably Google Stadia and Microsoft’s Project xCloud, we encountered lag issues when testing triple-A games with Bluetooth controllers on smartphones. Last month, the testing wizards at Digital Foundry confirmed our suspicions about Bluetooth controllers causing extra latency. But that analysis was inconclusive, as Project xCloud’s early public testing app doesn’t yet support wired controllers. We’ve seen controllers wired to smartphones at Google and Microsoft press events, leading us to believe that wider support for wired controllers is coming to these services, and that’s likely to make all the difference in latency. Every millisecond counts when streaming a triple-A gaming experience over the cloud to (and from) a smartphone, and Bluetooth isn’t helping.

Once xCloud gets a wired controller update, the best solution is to attach a plastic controller clip to your favorite game controller so that your phone screen is held up stably, then add a dangling wire to connect that controller to your phone. That’s an annoying but viable option for home use, but it’s a much more difficult proposition of controller, clip, and cable to throw in a bag on the go.

Kishi, on the other hand, snaps together when not in use, resulting in a fairly small piece of plastic to carry in a backpack. It also includes a connector feedthrough to keep the plugged-in phone powered up, which is a necessary evil while a cloud gaming session drains your phone’s battery. Sadly, this is a very CES-esque reveal, with no price or release date, but Razer’s experience with tethered-to-phone controllers makes us hopeful that the Kishi won’t feel “first-gen” when it launches later this year.