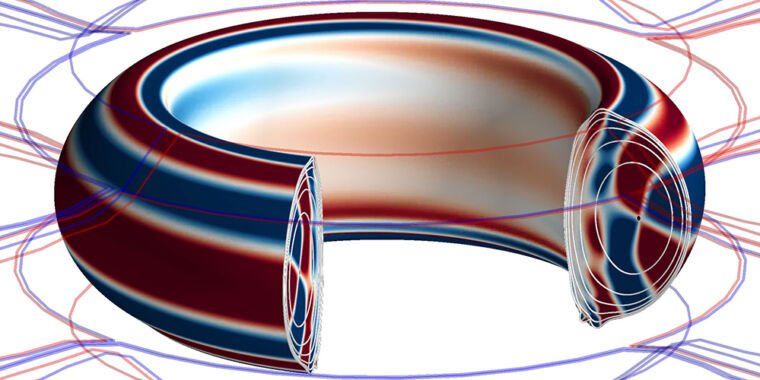 Depending on who you ask, fusion energy is either already there (but no one will buy my sekrit design!), it never will (so stop wasting money!), or a difficult problem that could be a partial solution are for an even more difficult problem. The latter, being the opinion of scientists actually working in the field, is often lost in all the noise.

Out of this fog of discussion arose recently a pile of papers, all focused on a proposed merger project: the SPARC tokamak. One of the surprising things about SPARC is its size. At just over 3 meters in diameter, SPARC will be smaller than current tokamaks, such as JET, which are nearly 6 meters wide. ITER, which is currently under construction in France, has a diameter of more than 12 meters. However, SPARC and ITER are expected to deliver approximately the same performance. Both are expected to produce more energy from fusion than the direct input energy, although neither are expected to produce useful power.

So why the difference? And what does this latest crop of paper tell us about the design?

In tokamaks it doesn’t matter how you use it; size matters. These devices confine a hot plasma using a donut-shaped magnetic field. One of these must be large for the tokamak to work. If you can create a stronger magnetic field, you can get away with a smaller tokamak and still get the same amount of power output.

The magnetic fields are generated by coils that carry very large currents. Generating the current is not really a problem, but feeding it into a conductor is. If you use something like copper, the power lost through the resistance of the wires will be huge as the power loss increases with the square of the flow. Worse, as the copper heats up, its resistance increases, leading to more heat buildup, a gleaming pool of liquid copper, and a seriously impressed safety officer.

Superconducting magnets are pretty much the only option. But all superconductors have a maximum current density. If you exceed that, the conductor will begin to show some resistance. Unfortunately, the materials from which superconductors are made are often poor normal conductors. If you don’t follow the laws of physics here, an apoplectically angry security officer and bespectacled accountant will try to bill you for a large amount of helium and possibly a new building.

Once you know the maximum current you can carry, the magnetic field can be determined. From this you choose how much power you want to generate via fusion, and that determines the size of the tokamak. (About; a few details are missing in this process.)

Given this knowledge, and given that ITER was designed with state-of-the-art magnets, you would have to conclude that SPARC struggled to do this math. Except that ITER was designed in the 1990s and 2000s. Since then, high-temperature superconductors with much better performance have been discovered and put into commercial production. With the help of these modern superconductors, the magnetic field strength can be doubled, which means that the tokamak can be significantly reduced in size.

Is the future so rosy?

While both ITER and SPARC are entering uncharted territory, there is quite a bit of difference between the two projects. ITER has been modeled and studied down to the last detail. Teams of scientists have spent decades working on every aspect to try and predict the performance of ITER. SPARC, as a smaller device, can’t just transfer the numbers and shrink everything by a factor of two. The recent articles attempt to meet the challenge of modeling the new design.

They show that SPARC basically sounds good. The plasma must reach the right conditions. The plasma must be capable of sustaining itself — it can carry a current that generates a magnetic field that helps it confine itself — about as long as similarly sized tokamaks. That seems okay.

On the other hand, instabilities are likely to worsen because the plasma is denser. In particular, phenomena called edge-localized modes can develop faster and be more difficult to suppress (or reduce). These instabilities occur at the edge of the plasma and in the worst case lead to depletion of hot plasma on the vessel walls. Other instabilities are disruptive in various ways, leading to less confinement and lower temperatures, so these should generally be monitored.

These instabilities, if not controlled, can result in massive currents flowing into the vacuum vessel causing major damage. This is the kind of scenario that gives ITER engineers nightmares, and the situation isn’t much different for SPARC: big flows, the whole machine jumping off its foundations, and other enjoyable dynamic disasters are possible. However, SPARC also seems to behave similarly to existing tokamaks, meaning that the predicted instabilities should be manageable.

A diverting puddle of tungsten

Where things seem really marginal is in the diverter. In every tokamak there is a zero in the magnetic field. Particles don’t just leak through the zero, they spray like a fire hose. The diverter is the chosen location where this nebula of particles hits a surface.

Even in current generation tokamaks, the diverter materials do not survive very long. In ITER, the diverter will be subjected to even more extreme conditions. SPARC can make ITER look like warm milk.

In their most pessimistic scenario, tungsten rocks will melt and recrystallize cyclically. During this process, tungsten atoms are likely to penetrate the nuclear plasma, cooling it and even quenching the fusion reaction. Carbon, an alternative, is a sacrificial surface that does not kill the plasma. So carbon can eventually be used in SPARC so they can show that fusion works.

But the end result of using carbon will be organic molecules with a high percentage of tritium – not something to mess with. And certainly not something to be considered for a commercial reactor.

The success or failure of fusion rests on three pillars: science, technology and economics. ITER and SPARC will complete the science pillar. Assuming we understand the physics quite well – and I think we do – both tokamaks will show that fusion reactors are possible that can produce usable electricity. ITER goes a step further than SPARC and also demonstrates many of the technical requirements. For example, Tokamaks will have to be cleaned by robots and that is in the plan for ITER. The results of ITER can be transferred to future fusion reactors.

In any case, with enough work, the engineering case will probably be made. The economic situation is much less certain. Most fusion researchers recognize this. The large ITER-style tokamak is a comparable investment to the nuclear power plants of the 1950s. And the payoff (if it ever arrives) is on a similar timescale. No one knows for sure who, if any, is willing to risk that much money for that prospect. SPARC, by significantly reducing the scale, makes the economics better by shortening the time scales.