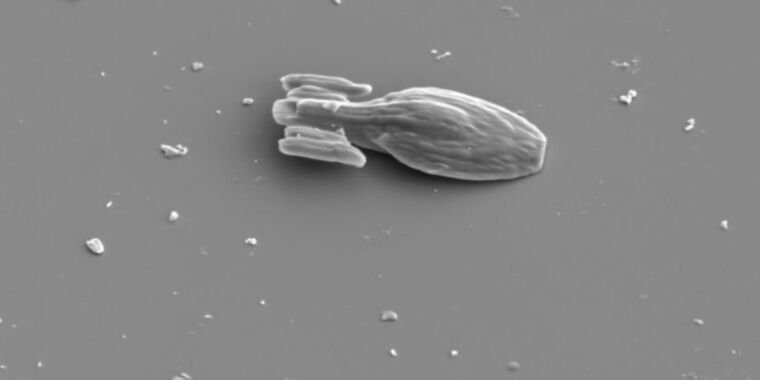 Physicists from Leiden University in the Netherlands have a 3D printed microscopic version of the USS. created Voyager of the Star Trek franchise, according to a recent article in Soft Matter magazine. These kinds of synthetic “micro swimmers” are of great interest to scientists because they could one day lead to tiny swimming robots for autonomous drug delivery through the bloodstream or for cleaning wastewater, among other potential uses. Such studies could also shed light on how natural “micro swimmers” such as sperm and bacteria travel through the human body.

Due to their small size, micro swimmers face unique challenges when moving through liquids. As we have previously reported in the context of several studies, biological microorganisms live in environments with a low so-called Reynolds number – a number that predicts how a liquid will behave based on the variables of viscosity, length and speed. Named after 19th-century physicist Osborne Reynolds, the concept is especially useful for predicting when a liquid changes into turbulent flow.

In practical terms, this means that inertial forces (eg pushing against the water to propel yourself forward while swimming) are largely irrelevant at very low Reynolds numbers, where instead viscous forces dominate. So because bacteria or sperm swim with low Reynolds numbers, they can barely travel any distance if you push them to move them. It is similar to a human trying to swim in molasses.

“By studying synthetic microswimmers, we want to understand biological microswimmers,” study co-author Samia Ouhajji told CNN. “This understanding could help develop new vehicles for drug delivery, for example microrobots that swim autonomously and deliver drugs to the desired location in the human body.”

Shape appears to be a major factor influencing the movement and interactions of microswimmers, which is the focus of this latest article. “Form and movement in synthetic and biological microswimmers are closely linked,” the authors wrote. Previous studies have shown that L-shaped particles, for example, follow circular orbits. And in 2016, scientists at Southern Methodist University built micro-swimmer robots that resemble a chain of magnetic beads. The movement of the robots can be controlled via a rotating magnetic field. The researchers found that microswimmers of different heights had different swimming characteristics. Most notably, longer specimens swim faster.

The Leiden team needed a robust method to create micro swimmers in all kinds of complex shapes. Synthetic microswimmers are usually made via chemical or vaporization techniques, which, while effective, limit the possible shapes to spheres or rod-like colloids. Biological microswimmers are much more diverse and asymmetrical in shape. So the Leiden researchers opted for ‘two-photon polymerization’ or 2PP, a method that enables 3D printing of microstructures and yet has some flexibility in terms of shape and symmetry. It also allowed them to control how a particle is oriented relative to the fused silica substrate it is printed on, giving them additional control over the resulting motion.

“The potential of 2PP to create microswimmers with a wide range of geometries is enormous, allowing the production of almost any shape desired,” the authors wrote. According to co-author Daniela Craft, a physicist from Leiden University, the team focused a laser into a droplet and used it to “write” any structure they want. They were able to create a variety of micrometer-scale shapes using a high-resolution 3D printer. After printing, the objects were placed in propylene glycol methyl ether acrylate for 30 minutes and dipped in isopropanol five times. As a finishing touch, each structure was coated with a catalytically active platinum/palladium nanolayer.

The team started by printing spherical particles in the range of 1 to 10 micrometers as proof of principle and concluded that 4 micrometers was the lowest they could go and still produced reasonably spherical shapes. They then showed that their spherical particles, when placed in water, exhibited Brownian motion, the random movement of particles in a liquid as they constantly collide with other molecules — that is, they behaved like real colloids. (Fun fact: One of the seminal papers Albert Einstein published in 1905 – his annus mirabilis modeled individual water molecules as a mechanism for the observed random movement of pollen particles in a puddle.)

Then the Leiden scientists placed their micro swimmers in a solution of water and hydrogen peroxide; the platinum/palladium coating reacted with the solution to create self-propulsion or active motion. “The difference in the passive pathways in water and those in hydrogen peroxide solution shows that a simple coating procedure can make 3D-printed colloids active,” the authors wrote.

For the next phase of their research, the Leiden team expanded their repertoire to print more complex structures in 3D: a spiky sphere, a spiral, a helix and a so-called “3DBenchy” boat 30 micrometers long – short for “benchmark, a structure often used to test 3D printers to see how well they handle fine detail. For example, the Benchy boat has challenging geometric features like portholes and an open cabin.

And of course they made the micro version of the USS Voyager, with a length of only 15 micrometers. That was commissioned by co-author Jonas Hoecht, who was given the choice to print any desired 3D shape for the final sample. Hoecht is a diehard Star Trek fan and chose the Voyager† All 3D printed micro-objects were imaged using a scanning electron microscope (SEM).

“We hope to learn about what is now a good design principle for making a small drug delivery vehicle – if you have a small particle that goes to a specific part of the body to deliver medicine, then it has to propelling itself, and it could have to do with the environment in your body, which is very complex,” study co-author Daniela Kraft told CNN. “What we’re trying to answer is, what would be a good design? What would be a great shape so that it can go around and be efficient?”

The team’s research showed that particles made in a helical shape showed the most promising movement. “When it goes forward, it has to spin a lot, and that helps accelerate it, for example,” Kraft said. “If you think about applications, if you want to have a small machine that goes somewhere, it might be more convenient to have a helix shape because it swims faster.”