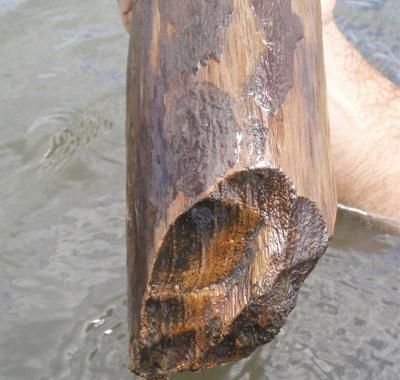 Standing on the shore of a salty lagoon at the mouth of Belize’s Monkey River, you won’t see many signs that an ancient industry once flourished here. Today, there are only dozens of sunken clusters of wooden posts — some now overgrown with mangroves, all long buried in silt — and artifacts such as pottery and stone tools. But a thousand years ago, the community now submerged beneath the lagoon’s calm surface may have supplied salt and dried fish to a network of Mayan cities.

While airborne laser studies reveal how complex Mayan trade networks were hundreds of years ago, microscopic analysis of Mayan stone tools suggests that salt cakes and dried fish may have been among the most important commodities transported on those trade routes.

Before Etsy, there were Mayan marketplaces

A thousand years ago, the people who lived near the shores of the lagoon, during the four-month dry season — when the water in the lagoon evaporated, leaving behind a particularly salty brine — would have heated brine in clay pots over fire and drained the water. boil away until a biscuit of salt remained at the bottom of the pot. Every household here would have maintained its own salt kitchen, and many would have lived alongside their jobs (at least during the dry season) or in the nearby community of Wild Cane Cay.

This type of cottage industry was typical of Mayan working life in the late classical period. From crops to pottery, obsidian to salt, households would use what they needed and sell the rest in markets. Don’t think of that household surplus as small potatoes: a single salty kitchen, run by a single household, could have turned out six tons salt in one season.

In the modern Mayan community of Sacapulas in Guatemala, two people working in a single salt kitchen can produce 56.7 kg of salt per day. If ancient Mayan households were so prolific, one of them could produce enough salt to meet the needs of nearly 7,000 people every day. And dozens of such households settled on the banks of the Payne’s Creek lagoon. Trade networks connected those individual households to the wider Maya economy.

“Excess household products were taken to markets in major cities such as Caracol and Tikal and to markets in other communities,” wrote archaeologists Heather McKillop of Louisiana State University and Kazuo Aoyama of Ibaraki University in Japan. An image of a marketplace on a wall in Calakmul includes a salt seller, labeled with the Mayan sign for salt, and chemical analysis of a series of human remains from the inland town of Tikal suggests the individuals there consumed salt that was from the coast brought along.

A closer look at stone tools from underwater sites at Payne’s Creek suggests that these household salt kitchens also produced salted fish and meat for transport to marketplaces in inland towns. McKillop and Aoyama examined the edges of 20 chert knives from the spot under a microscope. On 16 of the tools, the microscopic grooves and polishing of the stone matched the types of wear caused by cutting fish or meat.

Six others had wear that suggested the tool had been used to scrape hides, which could be mammals, reptiles or fish. That suggests that people in Payne’s Creek have salted fish in addition to producing salt. Like the salt cakes, dried fish would likely have been both a household necessity and a valuable commodity.

Further inland in southern Belize, a town called Lubaantan was thriving around the same time as Wild Cane Cay and the salt mines at Payne’s Creek. Archaeologists have unearthed animal remains there — both discarded meals and ritual objects — and 39 percent of those remains are marine fish such as jack, grouper and snook, which still swim in the waters off Payne’s Creek.

Most of the pottery in Payne’s Creek that was not used for salt cooking is in the same style as that of Lubaantan. That combination suggests that people from the coast traded fish with people at Lubaantan, perhaps in exchange for pottery and other goods. A canoe and wooden paddles found at Wild Cane Cay suggest that traders may have traveled up the river to Lubaantan.

Fish bones have also cropped up in middens and as ritual objects in other inland Maya cities, suggesting a strong link between coastal and inland markets. If McKillop and Aoyama are right, the Maya join a long list of civilizations that depended on the salt fish trade to provide a sustainable, high-calorie food source in times of famine. Dried fish was an important commodity in medieval Europe, where it helped build the Vikings’ extensive trade network, as well as in Imperial China, the Philippines, and ancient Rome.