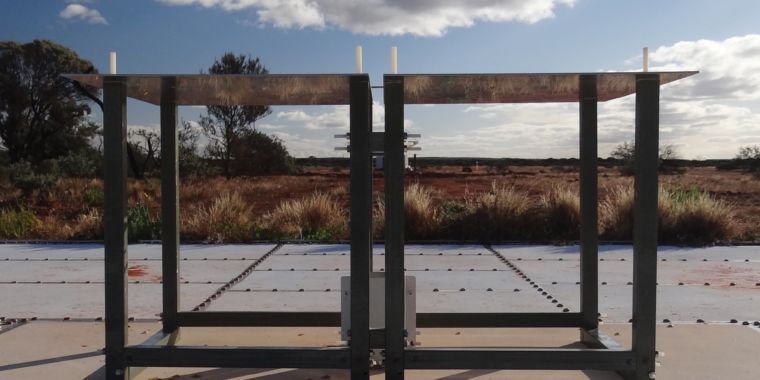 Today, a small team of researchers announce that the correspondingly tiny telescope has picked up something theorists had only suggested might exist: a signal produced by the very first stars in our universe. Their radio telescope, only two meters wide, could not image the stars directly. Instead, it took on an imprint on the cosmic microwave background left behind by the matter these stars interacted with.

And although the signal had been predicted by theorists, calculations had suggested it would be significantly smaller than it actually is. If the results hold up, it could be a sign that dark matter looks very different from what we expected.

The cosmic microwave background was produced when the universe cooled enough for electrons to settle in the first atoms of the universe, releasing radiation as they did. It famously records the state of the universe when it was formed, and tells us about the Big Bang that caused it, as well as the makeup of the universe’s contents. But in many ways, it’s the gift that keeps on giving, as subtle details in the background give more detail about the physics of the universe, and theorists regularly figure out ways to get more information out of it.

Theoretical considerations helped motivate the EDGES project, or Experiment to Detect the Global Epoch of reionization Signature. In an age of huge telescopes, EDGES is refreshingly simple: the largest part is just 30 square meters of metal plates on the ground. In the center are two radio antennas that are sensitive to a specific region of the spectrum that overlaps with part of the cosmic microwave background.

The ignition of the first stars produced a lot of high-energy radiation that heated up the surrounding gas and temporarily pushed it back to the threshold where it could interact again with the cosmic microwave background. These interactions would reduce the amount of background radiation in a specific region of the spectrum (currently in the radio wavelengths), with the precise details of the reduction depending on the state of the gas at the time. The EDGES Observatory was designed with one goal in mind: to explore that part of the spectrum.

A lot of noise

The problem is that the cosmic microwave background is not the only signal at these wavelengths. Our own galaxy produces a lot of radiation there; so is Earth’s ionosphere, a high-altitude region of the atmosphere. Much of the team’s work involves identifying these other signals and removing them. For example, the galaxy’s signal is usually a cluster of individual absorption and emission lines, rather than a smooth spectrum. And the signal from the ionosphere fluctuates both with the seasons and based on what’s going on with space weather.

So the researchers did hundreds of hours of measurements over a few years. Halfway through, they turned one of their two receivers to make sure the signal wasn’t the product of local hardware. And to make sure all the signals were real, they ran their data through two independently written pieces of analysis software.

When they were done, there was a clear signal. The most distant, oldest galaxy we know of is far enough away to shift its light dramatically toward the red; one measure of this, called z, produces an az of 11. The signal detected by EDGES starts at an az of 15 and gets older. z = 15 corresponds to the universe that is only 270 million years old.

This is not conclusive evidence that the signal from the first stars has been found. Physics usually wants a confidence level of five sigma before announcing discovery, and this is 3.8 sigma. But it’s pretty convincing and about as good as this instrument is likely to do without much more observation time. Fortunately, there are a number of similar projects in the works, so we can have independent verification relatively quickly.

The detection itself is an impressive feat and will help verify our theoretical models of the conditions of the Universe when the first stars formed. But, as mentioned above, the signal also contains information about those conditions. And that information is pretty weird.

The amount of energy absorbed will be related to the temperature of the gas of the Universe when the first stars ignited. And here the data offers a bit of a surprise: The absorbance was twice that predicted by even the more extreme models of the early Universe. This means that the gas present in the universe cooled much faster than we expected.

Why is that weird? Because almost everything we know about the universe was hot at the time. There is no obvious mechanism to cool the gas.

The EDGES team discusses this issue at length, but an accompanying theoretical article by Rennan Barkana of Tel Aviv University explains the problem and solution quite succinctly. “The additional cooling indicated by the data is only possible through the interaction of the [gas] with something even colder,” Barkana writes. “The only known cosmic constituent that can be colder than the early cosmic gas is dark matter.” In fact, almost everything except particles that have been proposed to explain the gravitational effects of dark matter are like primordial black holes, the gas should heat up.

The problem is that cooling the gas requires dark matter to interact with it, and dark matter, as we now understand it, doesn’t interact much with anything. In addition, calculations based on the cooling suggest that the dark matter particles should be much lighter than we expect: a small fraction of the mass of the Higgs boson.

It’s a bit of a cliché in scientific reports to say we need more data. But we really need more data here. It would be good to make the significance of this signal so great that we can be completely sure that we had a discovery, rather than just make it look extremely likely. And we certainly want an indication that the amount of energy absorbed is really double that predicted by theorists. Barkana also shows that the signal should be distributed unevenly in space, with hot and cold spots. To pick these up, we’ll probably want to place an instrument in space — perhaps in orbit around the moon, so it’s partially shielded from radio sources on Earth.

Until we have more data, however, the theorists will have a field day with these results.