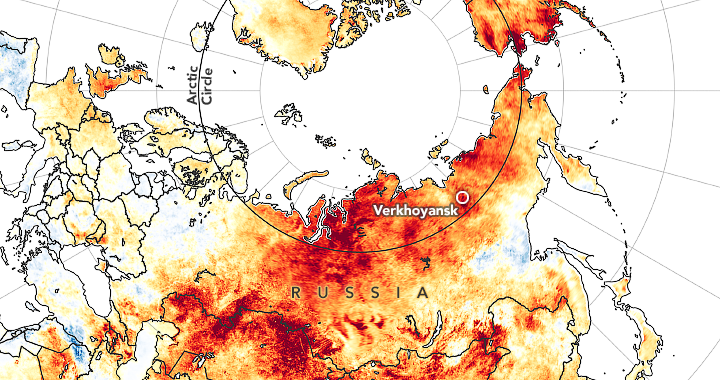 Overall, 2020 was a hellish year. But in Siberia, there’s another reason to make comparisons to the inferno: record-breaking heat and its consequences. Wildfires have burned about 8,000 square miles, aided by a huge crop of silk moths that eat the needles of conifers. And the collapsing permafrost also contributed to a massive diesel spill when a tank burst on unstable ground.

The direct cause of this extreme year was last winter’s jet stream pattern, which kept Siberia mild from late winter into spring, melting ice and snow early and driving up heat further. Then, in June, a persistent high pressure developed as a northward movement of the jet stream brought warmer air from the south into Siberia. It was during this heat wave that the Russian city of Verkhoyansk apparently reached 38 °C (100 °F) — a first for any station above the Arctic Circle.

As with many extreme weather events in recent years, a team of scientists has done a quick analysis of the role of climate change in all of this. The scientists analyzed both that record high temperature and the warm January-to-June across the region, concluding “in both cases that this event would have been virtually impossible without human-induced climate change.”

Organized as part of the World Weather Attribution project, these researchers have standardized their approach to these analyses. That allows them to work incredibly quickly – sometimes publishing as little as a week after an event – and also gives some confidence in their results, which are also submitted to scientific journals for the slow process of peer review.

The question with every weather event isn’t really, “Did climate change cause this?” but rather how likely it is that climate change contributed to its severity. To answer this, the weather records in that area need to be examined to look for trends and run climate model simulations with and without human activities.

The first thing the team analyzed was the six-month period for the entire Siberian region, which was just over 5°C above the 1981-2010 average. Based on the warming trend there, the scientists found that this warm stretch is still unusual — probably rarer than a once-in-a-century event. But it’s much more likely now than it was in 1900. Simulations of dozens of models matched, albeit with a wide range of exact estimates. The team conservatively focuses on the lower end of the range of all these estimates, concluding that the 2020 event is at least 600 times more likely than the 1900 climate. That may sound dramatic, but remember it’s the low end. The average estimate was actually a factor of 99,000 increase in probability†

The story about the record temperature in Verkhoyansk on June 20 (which has been verified by the Russian Meteorological Service but not yet by the World Meteorological Organization) is similar. Verkhoyansk has had a weather station since 1869, but since there are gaps in the data before 1926, that’s where the analysis starts.

Because this is a single station, the limited number of data points causes the error bars on estimates to swell. Given the warmest June temperatures in climate model simulations, the increase in the probability of this June temperatures basically extends to infinity. Returning again to the lowest estimates, the researchers state that global warming has made this event “more than many thousands of times” more likely.

Compared to analyzes of other heat waves, this is remarkably high. For example, last year’s European heat wave seemed about 100 times more likely in the current climate.

To see what these events might look like with high greenhouse gas emissions for a few more decades, the researchers also extended the climate model’s calculations into the future. As you might expect, the already dazzling numbers will become even more extreme by 2050. The January to June heat that Siberia has just experienced is growing to about 160 million times more likely than it was in 1900. And a 2020 rarity event would hit another 2°C – 7°C above the 1981-2010 average. .

Simply put, these record-breaking temperatures were unequivocally increased by man-made global warming. This is in line with the knowledge that heat waves are among the weather extremes that are increasing most clearly due to climate change.

This study shows once again how much climate change is a game changer with regard to heat waves. Since heat waves are by far the deadliest extreme weather events in most parts of the world, they should be taken very seriously. As emissions continue to rise, we need to think about building resilience to extreme heat around the world, even in Arctic communities — which would have seemed nonsensical not so long ago.