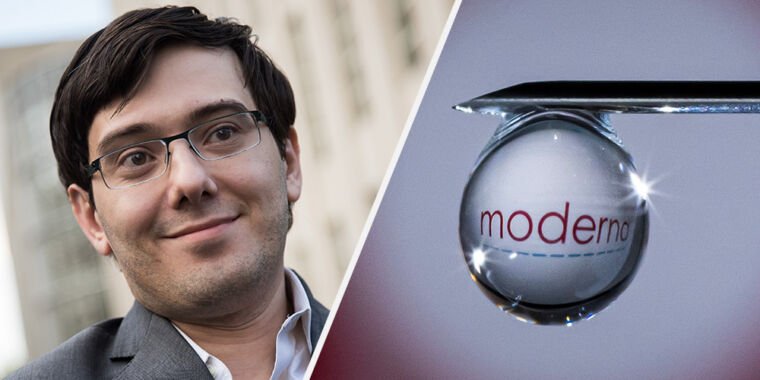 One of the leading developers of COVID-19 vaccines has now been placed in the ranks of the likes of Martin Shkreli — the disgraced pharmaceutical director notorious for pushing the price of an ancient, life-saving drug by more than 5,000 percent. He is now serving an 84-month sentence after being convicted in 2017 of fraud unrelated to drug pricing.

Moderna, maker of one of only two vaccines to have received emergency authorizations to prevent COVID-19 in the US, has been shamed with a 2020 “Shkreli Award” by the Lown Institute, a healthcare think tank. The awards, which have been announced annually for four years now, go to “perpetrators of the ten most egregious examples of profiteering and health care dysfunction.”

Award judges cited Moderna’s pricing of its COVID-19 vaccine, which was developed with $1 billion in federal funding. Despite taxpayer support, Moderna has set estimated prices for its vaccine significantly higher than other vaccine developers.

In August, the company set the estimated price range of $32 to $37 per dose, making the two-dose regimen $64 to $74 per person. At the time, pharmaceutical giant Pfizer and its partner BioNTech — who now have the other US-approved COVID-19 vaccine — had struck a deal with the US government to provide doses of $19.50 each, for a two-dose regimen. from $39 per person. Notably, Pfizer and BioNTech developed their vaccine without any federal funding. Johnson & Johnson also had a deal to supply the US government with doses of its vaccine – still in the works – at a rate of $10 per dose.

In November, amid criticism, Moderna reportedly lowered its estimated cost to range in price from $25 to $37 per dose. And it eventually signed a deal with the US government to provide the vaccine at a price of $15 per dose, or $30 for a two-dose per person regimen.

Still, the judges at the Lown Institute wrote that, “given the upfront investment by the US government, we’re essentially paying twice for the vaccine.”

Award judge Deborah Blum added, “This is so blatantly greedy of a company that has no record of producing vaccines and built its current one with taxpayer help.” Blum is a Pulitzer Prize-winning science journalist and director of the Knight Science Journalism program at the Massachusetts Institute of Technology.

Moderna again appeared on the price list. Judges noted that Dr. Elizabeth Nabel, CEO of Brigham and Women’s Hospital and a member of Moderna’s board of directors, wrote an op-ed in February defending high drug prices. Nabel did not disclose her role at Moderna in the op-ed. She also faced conflicts of interest after Brigham and Women’s Hospital was selected as a trial site for Moderna’s vaccine.

The judges noted that Nabel had received $487,500 in Moderna stock options and other payments in 2019 and sold $8.5 million in Moderna stock in 2020 after the company’s shares nearly quadrupled amid outcry surrounding the COVID-19 pandemic. 19 vaccine. Nabel stepped down from Moderna’s board in July after criticism.

Moderna did not immediately respond to Ars’s request for comment.