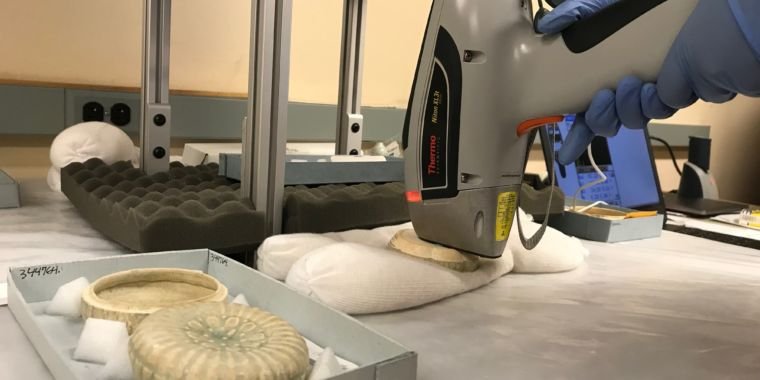 Sometime in the late 12e century CE, a merchant ship laden with trade goods sank off the coast of Java. The 100,000 ceramic vessels, 200 tons of iron and smaller amounts of ivory, resin and tin ingots offer a narrow window into a much wider world of global trade and political change. The merchant ship that sank in the Java Sea was the pointed tip of a very long spear, and a new study sheds some light on the trade networks and manufacturing industry hidden behind the cargo — all thanks to a little help from a cool X-ray gun.

By the late 12th century, there was a network of trade routes crossing the Indian Ocean and the South China Seae century, connecting China of the Song Dynasty with distant ports in Japan and Southeast Asia to the east, Indonesia to the south and the Middle East and East Africa to the west. Merchant ships transported crops, raw materials such as metals and resin, and manufactured goods such as ceramics along these routes. Today, ceramics are a common sight in shipwrecks in these waters, in part because the material lasts longer than most things on the seabed, and in part because of the enormous volumes that can be packed into the holds of merchant ships from about 800 CE to 1300 CE.

Archaeologists have found Chinese ceramics in sites stretching from Japan to the east coast of Africa. And excavations in southeast China have unearthed several kiln complexes, each containing hundreds of dragon kilns — long tunnels dug into slopes that can fire up to 30,000 ceramic pieces at once — clustered in a few square miles. All that production was focused on exporting ceramic bowls, boxes and other containers to overseas markets. “Most ceramics from this region are rarely found in domestic settings in China and are found almost exclusively along the maritime trade routes,” Field Museum archaeologist Lisa Niziolek, a co-author on the study, told Ars Technica.

The premium stuff, called qingbai, came from a complex called Jingdezhen in Jiangxi Province: fine vessels with translucent light blue glaze over a smooth white outer paste. But kiln complexes across China fueled a booming market in knock-off Qingbai. In particular, the kilns in Fujian Province were found to produce thousands of imitation qingbai casks – a lower quality, but a much larger volume. Last year, a label on a ceramic box from the Java Sea Wreck traced that box to the capital of Fujian Province.

Fujian once had many kiln complexes spread over a large area, and many of their wares were quite similar (that was the point, after all). To figure out which kiln complexes supplied the Java Sea Wreck’s cargo, archaeologist Wenpeng Xu and his colleagues at the University of Illinois had to look at the chemical fingerprints of the ancient ceramic’s thin bluish glazes. That’s where the X-ray gun — technically called a portable X-ray fluorescence detector — comes in.

When X-rays hit something, such as a 900-year-old ceramic bowl, the atoms in the bowl tend to fluoresce or emit energy in the form of photons. Each chemical element tends to emit photons with its own unique frequency, so counting the photons of different frequencies allows an XRF detector to “read” the chemical composition of an object. In this case, Xu and his colleagues were interested in the glaze — the thin outer layer — of ceramics from the shipwreck in the Java Sea and four kiln complexes in southeastern China: Jingdezhen, Dehua, Huajiashan and Minqing.

When they analyzed the chemical signature of some ceramics from the kiln complexes, they found that each site has its own signature, a combination of the chemical composition of the local clay and the specific recipes that potters used to make their pastes and glazes. Jingdezhen ceramic glazes usually contain more iron and less thorium than others, while imitations of Dehua contain more zinc and thorium and less iron.

Xu and his colleagues scanned 60 ceramic fragments from the wreckage and their chemical signatures clearly fell into four separate groups, each corresponding to one of the four kiln complexes. It turns out that the ship destined to become the Java Seawreck had filled its hold with not only a selection of genuine Qingbai ceramics bound for foreign ports, but also a wide range of counterfeit goods of various types and quantities, Niziolek says. that they came. as a surprise to the archaeologists.

“Finely made qingbai wares from Jingdezhen represent only a very small percentage of the cargo,” she told Ars Technica. “The majority of qingbai wares came from kilns in Fujian Province, which produced a huge number of ceramics for export to markets in East and Southeast Asia and other parts of the world in the Indian Ocean.” And that reveals far more complexity in the trade networks of the medieval Pacific than most archaeologists and historians usually suspect, linking potters far inland in southeastern China with markets around the Indian Ocean.

Xu and his colleagues say that, based on their findings, the ship likely stopped in the port of Fuzhou to take ceramics from Jingdezhen, Minqing and Huajiashan, which could have traveled to the port by riverboat. It would then have driven 180 km (111 miles) south along the Chinese coast to the port of Quanzhou to pick up more wares from the kiln complex at Dehua. “The results of this study show that a large number of ceramics in the batch were produced in kilns in northern Fujian, which are closer to the port of Fuzhou,” Niziolek told Ars.

If they are right, it means that the medieval merchant captain made a conscious decision to add time and distance to the journey in order to transport a wider selection of wares to markets in Indonesia.

From China, archaeologists believe the ship was heading for the bustling Javanese port of Tuban when it met its fate. It was not the first or the last ship to be lost in those waters. “Chinese ceramics from this period have been found in the area and there are reports that many of these are from shipwrecks off the coast there,” Niziolek told Ars. The crew no doubt knew the risks of an ocean voyage, but it’s unlikely they could have imagined that centuries later, half their cargo would be stored in a museum in a city that didn’t yet exist.

That underlines how much archaeologists have yet to learn from a shipwreck first excavated in the 1990s — its artifacts have been in the Field Museum since 1999. In 2011, Xu, Niziolek and their colleagues started a large-scale project to trace the sources of the objects found at the wreck site.

“These projects are resource-intensive and many of them have collaborated, so it takes some time to find funding, conduct research and analysis, and publish the findings,” Niziolek told Ars. “The work on the materials from the shipwreck in the Java Sea demonstrates the value of ongoing in-depth research into an existing museum collection.”