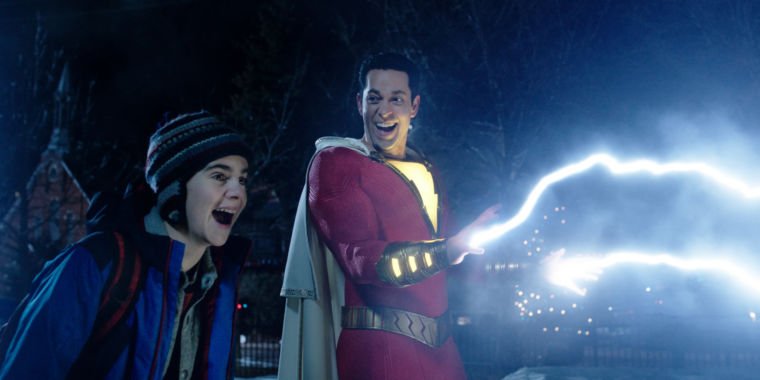 To have a reputation as a more elaborate movie studio, DC Comics not only has Wonder Woman† It also needs movies like Shazam!-one-off bites free from the weight of a connected universe, unabashedly treading the same terrain as the best kids action movies of the 80s, making us laugh with an infusion of Spielbergian heart.

Shazam! is in no position to “redeem” DC Comics’ reputation compared to Marvel Studios’ fare, and it succeeds most by carrying that fact on its staggering teenage sleeve. Of course, Marvel comparisons are inevitable, so I’ll start with one: the resulting movie ends up somewhere between the first and second Ant-Man movies. It’s fun. It is funny. It is well. Shazam! can be easily criticized for problems and errors, but the worst problems are nitpicks, not damning reasons to stay clear.

We have a Monster Squad apology here

I particularly liked the solid cast of kids and teens. As shameless mining of the 80s good that brought us Big† The Gooniesand ET brings us more talented young actors having fun and kicking with magical powers while learning valuable friendship lessons, so for sure. For example, I don’t really get tired of that formula. (Gosh, I still like it Monster Squadwhich was already unnecessary goonies rip-off when it came out 30 years ago.)

There’s more plot than that in Shazam!– about a sorcerer who defends an ancient temple against seven beasts that represent the deadly sins, and an evil force who releases those sins, and a pensive child who somehow contacts that sorcerer to claim his powers in the nick of time – but none of that would work it doesn’t matter if we didn’t like the young actors who dominate this movie.

Teen protagonist Billy Batson (played by Asher Angel) and his accidental best friend Freddy (Jack Dylan Grazer) unite on opposite sides of the outcast spectrum, and it’s a good combination. The film establishes Billy’s petty crime streak and emotional restraint, then introduces Freddy’s damaged enthusiasm. Their friendship is not automatic, so Shazam! is aware of that and has each character tiptoe into niceness before teenage Billy turns into an unwitting, adult superhero (played by Zachary Levi). At this point, each criticizes the other as they become friendly pranksters, only to poke each other’s insecurities when each sees the whole superhero thing going a different way than the other expected.

Meaning: The duo have their share of one-liners, including some delicious Beavis & Butt-head-like reactions. But buying their friendship and watching it evolve is what elevates Shazam! beyond his best jokes (a few of which were already spoiled by trailers). By the way, this quality makes Shazam! easy to watch if you know bupkis about comics history.

Zachary Levi also counts as a likeable young actor in this film, as he does the whole Tom Hanks thing (a fact the film acknowledges in one laughable moment). However, the biggest problem I have with his performance is that he has a different teenager than Billy’s character. The actual teen has endured legitimate trauma and is hardened and flaccid in equal measure, as appropriate. Levi’s look never reflects this crucial emotional content, and in many scenes it makes sense – Levi is the one with the cape and the body armor.

This acting disconnect in no way sinks the film. Levi gets a well-deserved laugh doing the old Hollywood switcheroo for adults. But it’s a clear example of Levi taking on a legitimately heavier role than… Big‘s Hanks – of balancing a teenage character’s painful backstory with the Red Bull sugar rush of flight and lightning bolts – and so pales in comparison.

The rest of the cast comes in the form of Billy’s ungainly foster family, led by a precocious, eager sister (Faithe Herman), who earns all her laughs and “aww”s without wandering into Mary-Kate and Ashley Olsen territory. She’s completed by a sensible older sister (played by Grace Fulton, who does a nice Linda Cardellini impersonation) and a tech-addicted little brother (Ian Chen).

When Shazam! finally manages to get all of his kids working together for a big moment, the effect is palpable enough to jump over the same gimmick The Goonies† This group of kids learn to become a family over the course of the film, and that milestone comes with good-natured jokes and craziness, not the brutality of goonieschildren bullying Chunk.

Unfortunately, the film is sorely lacking in any noticeable eccentric or memorable villain. Instead, we get Thaddeus Sivana (played by Mark Strong), a long-scorned investigator obsessed with avenging his father and brother. His leap into pure evil is as one-dimensional as a Scooby-Doo villain’s, but Strong isn’t the right actor to take this character somewhere campy or wild, and he’s not helped by a script that puts him in it. in fact leads to be the example of how Billy? could proved, in terms of his own family issues.

Sivana’s descent into supervillain isn’t helped by a few gaping logic holes. First, a helpful wizard chews out Sivana’s youthful self within the first 10 minutes for no apparent useful reason. Then, an elderly Sivana plunges years and millions of dollars into a research project only to amaze his colleagues when he reveals that it has been an investigation into secret, supernatural powers all along.

Still, the end result is a superhero movie that boldly leans into an Indiana Jones vibe (complete with a John Williams-caliber score) along with a healthy dollop Deadpoolkid’s jokes about the wider DC Comics universe. Shazam! is the kind of family-friendly movie that feels like it was made for older teens—something a 10-year-old can watch and feel like being sneaky—without getting older fans bored.

And despite some flaws and shortcomings, Shazam! crucially weaves two threads into one fabric: the emotional weight of its core teens, and a neat rhythm of sweet and sarcastic laughter. In the end I still think the Marvel universe has better entries in this camp (particularly the last two Spider-Man movies), but that’s no reason to avoid DC’s successful sting on this superhero subgenre†