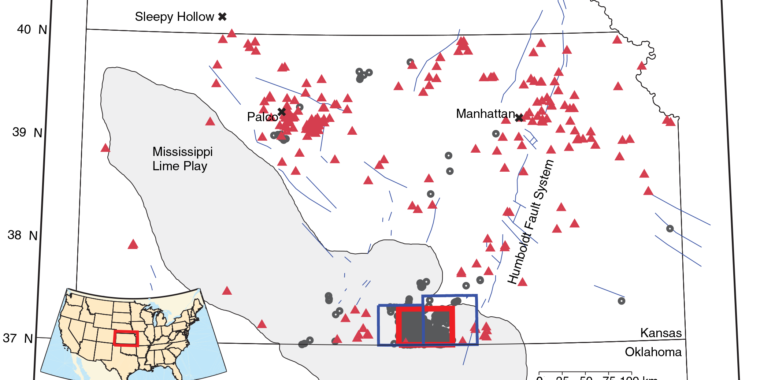 Over the past decade, Oklahoma has attracted attention for joining the list of places where earthquake insurance is a wise investment. The sudden increase in seismicity is due to injections of dirty wastewater into deep disposal pits – leading to what are known as ‘man-made earthquakes’.

The state of Okie is not alone in this, however. Because geology doesn’t respect state lines, the oil and gas wells that produce all this sewage — and the deep, saline aquifer it’s pumped into — extend into Kansas. And a new study led by Justin Rubinstein of the US Geological Survey confirms that they also caused earthquakes there.

Although Oklahoma has suffered structural damage during several earthquakes, Kansas has seen nothing stronger than a force of 4.9 on the Richter scale that shook some items off the shelves. But between 2012 and 2016, southern Kansas had six earthquakes of magnitude 4 or more, which seems far from normal.

To find out, the researchers relied on previous records of earthquakes in the state and a series of seismometers set up in early 2014 to better measure recent activity. The simplest analysis is to look for correlations in time and location between the drastic increase in earthquakes and wastewater injections in the state. These injections have been going on for a long time, but until 2012, little waste water was discharged in this way. At that time, the number of injections doubled in a year and more than doubled in 2014, peaking at over 100 million barrels per year.

Between 1974 and 2012, seismometers recorded only 15 earthquakes of at least magnitude 3, none of which were greater than magnitude 4. Over the next four years, there were six magnitude 4+ events and a whopping 127 magnitude 3+.

So the correlation over time is pretty striking, but what about the location of the earthquakes? The researchers focused on a very small area that contained the vast majority of recent earthquakes (red box in the image at the top of this story). The area also happens to contain the most active injection wells, and the earthquakes did indeed occur near active wells, sealing the study’s conclusion that the earthquakes were man-made.

However, there is one interesting exception. There is a small cluster of wells just outside the area the researchers focused on that handled about 40 percent of the total volume of injected wastewater, but almost no earthquakes occurred there. The researchers think this highlights an important fact: the geological details of the injection sites are critical.

For these injections to cause earthquakes, there must be faults loaded with stress in the area where the fluid pressure is increased. The increased fluid pressure relieves friction and holds the fracture, allowing the blocks to slide along the fracture, releasing their accumulated energy as seismic waves.

In Kansas and Oklahoma, the fractures are in deep igneous and metamorphic rocks just below the sandstone layer used by the injection wells. It is very possible that there is no suitable interference in the vicinity of these silent sources, or that the pressure change they cause simply does not reach interference. Perhaps easy flow paths cause the pressure to spread horizontally instead of downwards, for example.

As in Oklahoma, it is still possible that Southern Kansas will experience a significant earthquake at lower injection levels, but it is encouraging to see that seismicity has already decreased. The geological complexity illustrates why it is so difficult to answer the obvious question: how can wastewater injections be adapted to prevent earthquakes?