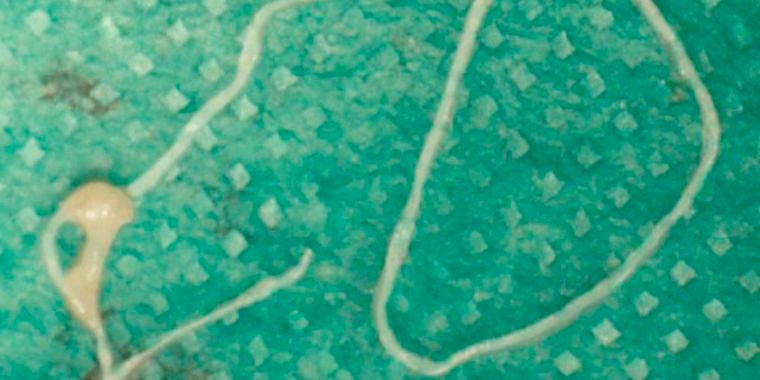 A 32-year-old woman who visited a rural area outside Moscow returned home with a surprise stowaway – in her face. And it was a troubled one, according to a brief report published this week in the New England Journal of Medicine (NEJM).

After her trip, she noticed an unusual lump on her cheek, below her left eye. Five days later it was gone, but another had formed just above her left eye. Ten days later, another lump appeared on her upper lip, causing massive swelling.

To track the progress of her wandering blemish, she took selfies. In reports to doctors, she said the nodules caused some burning and itching, but no other symptoms or problems. She also noted her recent trip and recalled that she was often bitten by mosquitoes.

Doctors determined that the wandering wart was actually a marauding parasite, likely transmitted by a mosquito bite during its journey. With tweezers, they pinned it down and surgically removed the long, thin, yellowish stowaway. Subsequent genetic testing identified the worm as a Dirofilaria repens.

D. repens are parasitic worms that mainly prey on dogs and other carnivores and move through mosquitoes – they only infect humans by accident. They are usually found in parts of Europe, Asia and Africa where they are known to grow up to 170 millimeters in length and live up to 10 years. The Centers for Disease Control and Prevention reports that: D. repens are not found in the US, but the country is home to relatives D. immitisthat cause heartworm disease in dogs, and D. tenuisthat affect raccoons.

In their favorite canine host, D. repens live in tissue under the skin and the females release larvae into the bloodstream. Those larvae are then picked up by biting mosquitoes, which hatch the mini mooches before transferring them to new hosts at their next blood meal. in people, D. repens are caught getting under the skin by victims who notice shifting subcutaneous nodules, just like the woman in the case report. Doctors sometimes refer to this as “creeping eruption.” In rare cases, the worms can wriggle into organs such as lungs, breasts, male genitalia, and eyes.

The lead author of the report in NEJMVladimir Kartashev, an infectious disease expert at Rostov State Medical University in Rostov-na-Donu, Russia, told The Washington Post in an email that D. repens is an “emerging disease” in the western part of the former Soviet Union and certain parts of Europe. Since 1997, he said there have been more than 4,000 cases in the region, most notably in Russia and Ukraine.

Fortunately, the worms are easy to remove and do not cause any lasting problems once removed. The woman in the business NEJM reportedly fully recovered.