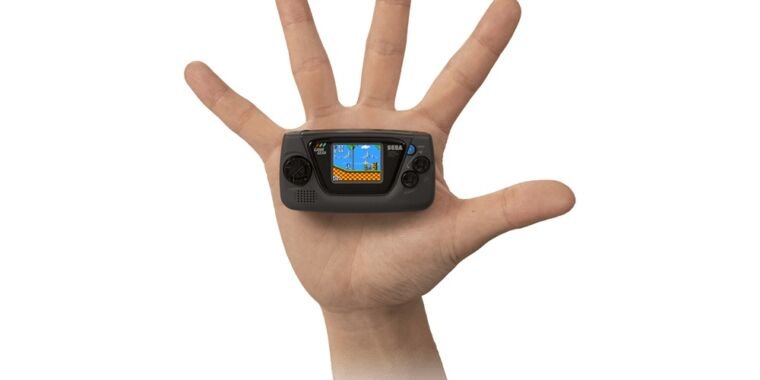 In celebration of the company’s 60th anniversary, Sega has announced the upcoming Japanese release of the Game Gear Micro. What Sega calls a “wearable mascot” will ship in Japan on October 6 for a suggested retail price of ¥4,980 (about $50). No release plans have been announced for other markets.

The nickname “Micro” is well-deserved here: The system measures just 3.14 inches wide, 1.69 inches high, and 0.79 inches deep (80mm × 40mm × 20mm). That’s roughly a 92 percent reduction in volume (or an 86 percent reduction in “footprint area”) over the original Game Gear, which was bulky even by early ’90s portable console standards. That also means the Game Gear Micro will receive the “smallest portable gaming” crown from the 2005 Game Boy Micro, which held the previous record at 4 × 2 × 0.7 inches with a 2-inch diagonal screen.

Despite its small size, the Game Gear Micro’s 1.15-inch screen manages a resolution of 240 × 180 pixels, which is in fact an improvement over the 160 × 144 pixel resolution of the original 3.2-inch. Game Gear screen. That brings the screen to about 260 pixels per inch, or just a little less than Apple’s roughly 300 dpi “retina display” standard.

And while the original Game Gear required six AA batteries (for just three to five hours of playtime), the Game Gear Micro can run on two AAAs or a USB micro power adapter. Sega even managed to squeeze in a mono speaker and headphone jack (eat your heart, Game Boy Advance SP).

Splitting the market in four

Like previous “plug-and-play” TV-based retro systems, the Game Gear Micro will only feature a limited selection of preloaded games, with no way to add more (at least officially). But in what seems like a blatant move to boost the collector’s market, Sega is adding four different games to each of the four different suits of the Micro system. Here are the lineups.

Japanese customers who pre-order all four models for ¥19,800 (about $200) will also receive a working miniature replica of Sega’s “Big Window” magnifying glass to make the small screen a little less squint. A translucent “Smoke” model is also available as part of a “DX” bundle from the Japanese Sega Shop, although this model doesn’t actually play games. Other Japanese stores offer other free bundles, such as T-shirts and pins.

With the Game Gear Micro, Sega becomes the first company to bring the recent trend of standalone retro systems into the wearable realm. We can only hope that a wildly successful release will convince Nintendo to follow Sega’s lead and give us the miniature Virtual Boy that we all crave.

Oh, and a new retro pack “Game Boy Classic” would be nice too, we suppose.