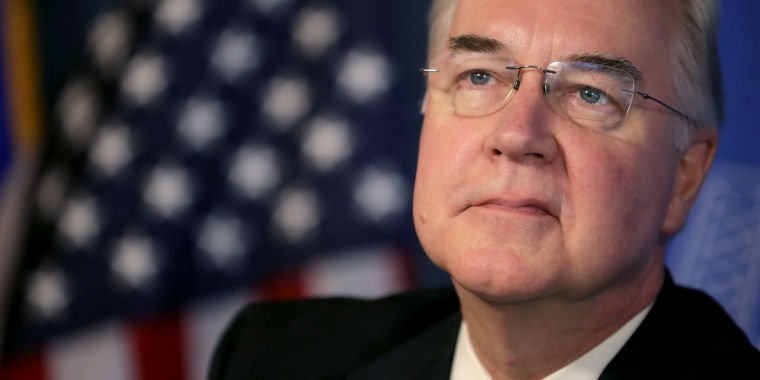 Secretary of Health and Human Services Tom Price resigned today amid a scandal over his use of private jets.

An announcement from the White House revealed that Price submitted his resignation on Friday and that President Donald Trump has accepted it.

Price leaves during an investigation into his use of private jets for business travel. Politico has estimated that Price has spent more than $1 million in taxpayers’ money on travel since May.

On Wednesday, Trump told reporters on the White House lawn that he was upset by the revelations. “I’ll look into it. And I’ll personally tell you I’m not happy about it. I’m not happy,” Trump said.

As things turned out, Price offered to pay for the charter flights with his own money. “The taxpayer won’t pay a penny for my seat on those planes,” he said in a statement Thursday. But as CNN reports, it became clear that he only wanted to pay for his seat, not the total cost of chartering the planes.

Price, a six-time Republican congressman from Georgia, has been a controversial figure in the medical and health communities since his nomination to the position, despite being a former orthopedic surgeon. He has drawn criticism for his plans to dismantle the Affordable Care Act, and for his opposition to abortion rights and tobacco regulations.

In today’s announcement, the White House said Trump will appoint Don J. Wright of Virginia as acting secretary to replace Price. Wright currently serves as Deputy Assistant Secretary for Health and Director of the Office of Disease Prevention and Health Promotion.