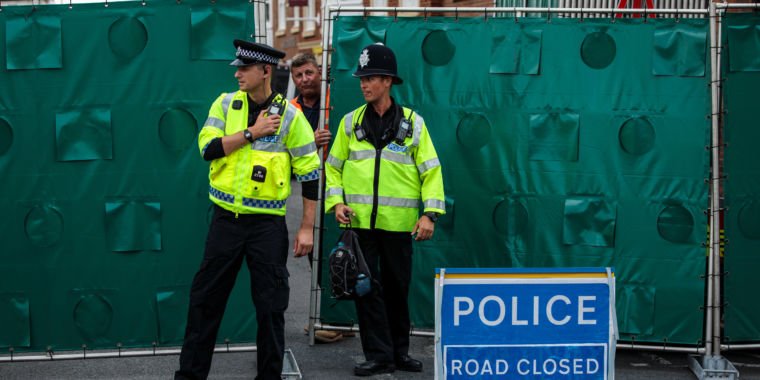 British officials are in talks with allies over a possible response to Russia after officials Wednesday confirmed a second case of poisoning on British soil with a nerve agent in Russia’s Novichok series.

In the new case, a couple – who have been identified by multiple media outlets as Charlie Rowley, 45, and Dawn Sturgess, 44 – fell ill and lost consciousness on Saturday in Amesbury, a town in Wiltshire, England. Their location was just a few miles from where former Russian double agent Sergei Skripal and his adult daughter, Yulia, were poisoned by a Novichok agent in March. On Wednesday, Scotland Yard reported that a chemical analysis identified the same Novichok agent as the cause of the new poisonings.

UK Home Secretary Sajid Javid on Thursday called on Moscow to explain “exactly what happened” and said the country will “consult with our international partners and allies in response to these latest developments”.

In the British House of Commons, Javid went on to say:

We will resist actions that threaten our security and the safety of our partners. It is unacceptable that our people are deliberate or unintentional targets or that our streets, our parks, our cities are dumping grounds for poison.

Russia has strongly denied any involvement in both cases. Vladimir Putin’s personal spokesperson told reporters on Thursday that “of course we are concerned that these substances have been used repeatedly in Europe… On the other hand, we have no information about which substances were used or how they were used. ”

Russian state media cast doubt on the poisonings and reject all notions of their country’s involvement. Several outlets accused British government officials and journalists of “dragging old skeletons out of the closet” and suggested the poisonings were staged.

As Ars has previously reported, Britain and its NATO allies have banded together to blame Russia for the poisoning of the Skripals in March. Britain expelled 23 Russian diplomats, and 26 other countries followed suit. An intelligence report in April specifically traced the Novichok nerve gas used in that attack to a Russian military laboratory.

Novichok, meaning “newcomer,” is a series of chemical weapons developed by the Soviet Union at the height of the Cold War. The nerve agents were designed to be undetectable and may have relied on combinations of otherwise harmless or non-suspicious chemicals. This would allow the Soviet Union to circumvent the Chemical Weapons Convention, which prohibits stockpiling chemical weapons and precursors.

The Novichok nerve agents cause damage by paralyzing the action of cholinesterase, an enzyme involved in the normal and essential breakdown of some neurotransmitters. That breakdown allows nerves to return to a resting state after being fired. Without this — or when a Novichok agent interferes with the enzyme — nerves can be continuously activated. This can lead to muscle twitching, paralyzed breathing, convulsions and death. The poisons are thought to be eight to 10 times as potent as VX or sarin gas.

British officials determined that the Skripals were likely poisoned after a would-be killer smeared the nerve agent on the latch of the front door of Mr Skripal’s home. However, it is unclear how or why Rowley and Sturgess came into contact with nerve gas. British officials reported there was nothing in their background to tie them to Russia or suggest they were being targeted. Investigators are investigating whether they simply accidentally came across remains of the batch of poison used in the Skripal attack. So they may have been unintended victims of discarded or persistent nerve agents — a possibility likely to put residents on edge.

Russian chemist Vil Mirzayanov, who now lives in the US and first exposed the Novichok program, told the BBC that such a statement is unlikely. He said the nerve agent is unstable, especially in humid conditions, and would have broken down in the four months since the Skripal attack. Instead, he suggested that the couple were victims of another incident. However, other chemical weapons experts have described the venom as “relatively stable” and speculated that certain storage conditions could extend its life. For example, the nerve agent could have resisted decay if it had been suspended in a water-repellent gel, one expert suggested. The New York Times.

Meanwhile, British officials, who are still investigating both poisonings, say the risk to the public is low. However, they cordoned off several areas and advised locals to wash their clothes and wipe their belongings if they were in those suspicious areas.