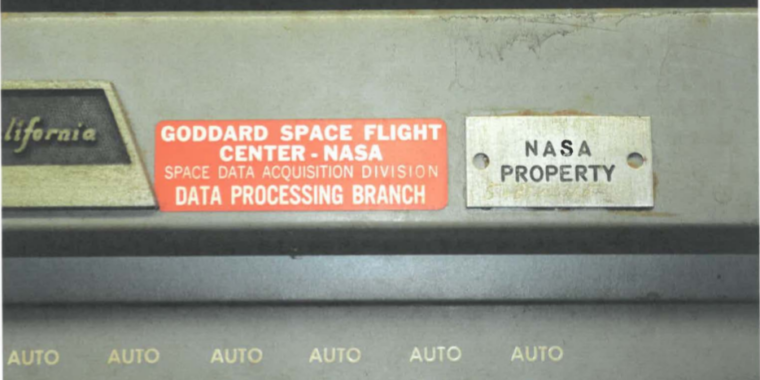 A pair of Apollo-era NASA computers and hundreds of mysterious tape reels have been discovered in the basement of a deceased engineer in Pittsburgh, according to a NASA Office of the Inspector General (OIG) report released in response to a Freedom of Information Act (FOIA) request.

Most of the bands are unmarked, but most of the rest appear to be instrumentation coils for Pioneer 10 and Pioneer 11, NASA’s fly-by missions to Jupiter and Saturn.

The two computers are so heavy that a crane was likely used to move the machines, the report concluded.

Sometime in the early 1970s, an IBM engineer working for NASA at the height of the Space Race took home the computers – and the mysterious tape reels. A scrap dealer, invited to clean out the deceased’s electronics-filled basement, discovered the computers. The devices were clearly labeled “NASA PROPERTY,” so the dealer called NASA to report the find.

“Please tell NASA that these items were not stolen,” the engineer’s heir told the scrap dealer, according to the report. “They belonged to IBM Allegheny Center Pittsburgh, PA 15212. During 1968-1972, IBM got rid of the items, so [redacted engineer] asked if he could have them and was told he could have them.”

You can read the whole report; the identity of the engineer has been redacted.

“Please tell NASA these items were not stolen.”

NASA researchers retrieved the 325 reels of magnetic tape on Dec. 8, 2015. The cassettes were 14 inches in diameter and filled with half-inch magnetic tape. The tires “were in poor condition and almost all of them were affected by moderate to severe mold.”

Most of the tapes were not labeled, but “of those tapes that were labeled, the content appeared to be related to space science with missions like Pioneer and Helios and the date range was 1967-1974.”

The report dryly notes, “The computers were not removed from the residence because of their size and weight.”

I conducted an initial review of the material on December 10, 2015. This assessment confirmed the estimated number of 325 magnetic data tape reels each measuring 14 inches in diameter with a magnetic tape size of ½ inch and held by a metal spool. The assessment also showed that the magnetic tapes were in poor condition and nearly all were affected by moderate to severe mold, which is identified as a health hazard. Most of the tapes were unlabeled, and of those that were labeled, the content appeared to be space science related. of missions including Pioneer and Helios and the data range was 1961 – 1974. A final review of the tapes on April 3, 2016 further split the content of the tapes into the following:

HE’S A [possibly an abbreviation for Helios A]: 2 rolls

Untagged or tagged with no mission-related identification information: approximately 215 rolls

The archivist’s final recommendation: destroy the tapes. “There is no evidence to suggest that this material is of historical importance… I recommend destroying all magnetic tapes immediately.”

After all the research, one last mystery remained unsolved. The NASA computers are labeled with a contract number: “CONTRACT NO. NAS5-2154.” NASA OIG couldn’t find any records of such a contract, so given that NASA once accidentally erased the Apollo 11 lunar landing tapes, perhaps that shouldn’t come as too much of a surprise.

We have reached out to NASA OIG for additional information, but a spokesperson said they have no further comment beyond the results of the FOIA request.

Now Read: The Hell of Apollo 1: Pure Oxygen, a Single Spark and Death in 17 Seconds