Scientists Solve Another Piece of the Mysterious Antikythera Mechanism | Techilink 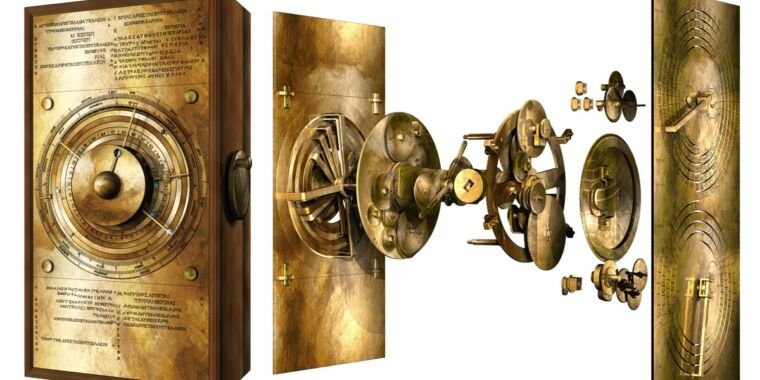 Scientists have long struggled to solve the puzzle of the gear system at the front of the so-called Antikythera mechanism – a fragmentary ancient Greek astronomical calculator, arguably the earliest example of a gear train. Now an interdisciplinary team from University College London (UCL) has devised a computational model that reveals a dazzling view of the ancient Greek cosmos, according to a new paper published in the journal Scientific Reports. The team is currently building a replica mechanism, moving gears and all, using modern machinery. You can watch an extended 11 minute video about the project here (embedding currently disabled).

“Our model is the first model that meets all the physical evidence and matches the descriptions in the scientific inscriptions engraved on the mechanism itself,” said lead author Tony Freeth, a mechanical engineer at UCL. “The sun, moon and planets are displayed in an impressive tour de force of ancient Greek brilliance.”

“We believe our reconstruction fits with all the evidence scientists have collected so far from the existing remains,” study co-author Adam Wojcik, a materials scientist at UCL, told The Guardian.

The hand-powered Antikythera mechanism has a long history. In 1900, a Greek sponge diver named Elias Stadiatis discovered the wreck of an old freighter off the coast of the island of Antikythera in Greece. He and other divers retrieved all kinds of artifacts from the ship. A year later, an archaeologist named Valerios Stais examined what he thought was just a piece of rock recovered from the shipwreck, but he noticed it had a gear inside. It turned out to be an old mechanical device. The Antikythera Mechanism is now housed in the National Archaeological Museum of Athens.

The 82 surviving fragments of the device were originally housed in a wooden box about the size of a shoebox, with dials on the outside, containing a complex set of gears. The largest piece is known as Fragment A, which has bearings, pillars and a block. Another piece, Fragment D, has a disc, a 63-tooth sprocket, and a plate. The existence of the mechanism provides strong evidence that such technology existed as early as 150-100 BC, but the knowledge was subsequently lost. Similar machines of similar complexity did not reappear until the 18th century. Though it was found on a Roman freighter, historians believe it to be of Greek origin, possibly from the island of Rhodes, which was known for its impressive displays of mechanical engineering.

It took decades to clean the device, and in 1951 a British science historian named Derek J. de Solla Price began investigating the theoretical workings of the device. Based on X-ray and gamma photographs of the fragments, Price and physicist Charalampos Karakalos published a 70-page article in the Transactions of the American Philosophical Society in 1959.† Based on those images, Price hypothesized that the mechanism had been used to calculate the motions of stars and planets, making it the first known analog computer.

In 2002, Michael Wright, then mechanical engineering curator at the Science Museum in London, made headlines with new, more detailed X-rays of the device, created via linear tomography — meaning only features in a particular plane are imaged, allowing for more accurate inspection and pinning the exact location of each gear is possible. Further analysis by Wright revealed a fixed central gear in the main gear of the mechanism, around which other moving gears could rotate. He concluded that the device was specifically designed to model “epicyclic” motion, in keeping with the ancient Greek idea that celestial bodies moved in circular patterns called epicycles. (This was pre-Copernicus, so the fixed point they orbited was believed to be the Earth.)