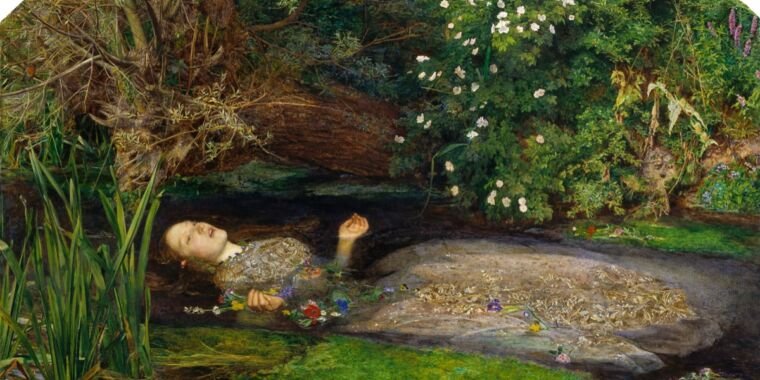 There is rarely time to write about every cool science story that comes our way. So this year we have another special series of Twelve Days of Christmas posts, highlighting a science story that fell through the cracks in 2020, every day from December 25th through January 5th. Today: identification of potential biomarkers (in mice) for capturing time of death in boggy corpses.

Correctly estimating the time of death seems so easy in fictional police procedures, but it is one of the more challenging aspects of the job of a forensic pathologist. This is especially true for corpses found in water, where a host of additional variables make it even more difficult to determine how long a body has been underwater. A team of scientists at Northumbria University in Newcastle, UK, has found a new method for making that determination, which involves measuring the levels of certain proteins in bones. They detailed their findings in an April article in the Journal of Proteome Research.

Co-author Noemi Procopio has been interested in forensic science since she was 14, but initially studied biotechnology because her home country of Italy had no forensic science programs. When she moved to the University of Manchester in the UK to complete her PhD, she chose to specialize in the application of proteomics (the large-scale study of proteins) in the field, thanks to the influence of a former supervisor, a archaeologist who applied proteomics to bones.

At the time of her PhD, little to no research had been done on bone proteomics in forensic science, and the subfield is still somewhat in its infancy. The results of such research on bodies in terrestrial environments were promising, Procopio said. But this is the first study in which bodies have been submerged in water.

Forensic pathologists usually sample the level of decomposition on various body parts (face, neck, trunk, and extremities), but when the body has been in water, other factors can make it more difficult to determine what is known as the post-mortem submerged interval ( PMSI): salinity, temperature, depth of the water, tides and, for example, whether bacteria or scavengers are present.

Procopio’s previous work on the use of proteomics to estimate the postmortem interval and age of death involved pigs, which are closest to the composition of the human body. For this latest research, she chose to work with mouse bodies for practical reasons. “If you’re doing an exploratory pilot study, it’s better to use a smaller model,” she tells Ars.

Using pigs also requires certain legal permissions to keep the pigs, and it’s actually hard to get pigs that have died of natural causes as opposed to slaughtering them for research purposes – something Procopio didn’t like to do. “I think animal research is fundamental in some ways, for example medical research,” she said. “But for forensics, I think we can use everything we have, animals that are already dead, instead of killing something for forensics.”

Instead, she and her team purchased 22 frozen mice from a reptile food supply center. Fortunately, freezing doesn’t seem to have a major effect on decomposition. “If you just freeze and thaw it once, it’s not that big of a deal when it comes to decomposition and how to handle it,” says Procopio. They thawed one set of mice at room temperature and another set at body temperature. Then they placed the mouse carcasses in bottles of tap water, salt water, pond water and chlorinated water. The tails were taped to the bottom of the bottles to ensure that all mice were kept at the same depth.

At one-week and three-week intervals, Procopio et al† collected the lower leg bones (tibia) from the mice bodies, extracted the proteins and analyzed them by mass spectrometry. They found that the type of water had less of an effect on protein levels than how long the bodies had been submerged. For example, the longer the immersion, the more levels of a protein called fructose bisphosphate aldolase A dropped. Water type did have an effect on one type of protein: fetuin-A changed chemically (deamidation) earlier in pond water than in the other types of water. This could be an indication that a body was initially submerged in pond water and then moved to another location.

Conclusion: These proteins could be excellent biomarkers to determine the time of death of swampy corpses. For future studies, Procopio and her colleagues hope to investigate the effects of different temperatures on, among other things, the bone proteomics of submerged corpses, ideally eventually moving to human bodies, “because that’s what we ultimately need to convert our findings to forensics.” she said. It is already working with a number of so-called ‘body farms’ to this end, although the ongoing pandemic has suspended that work.