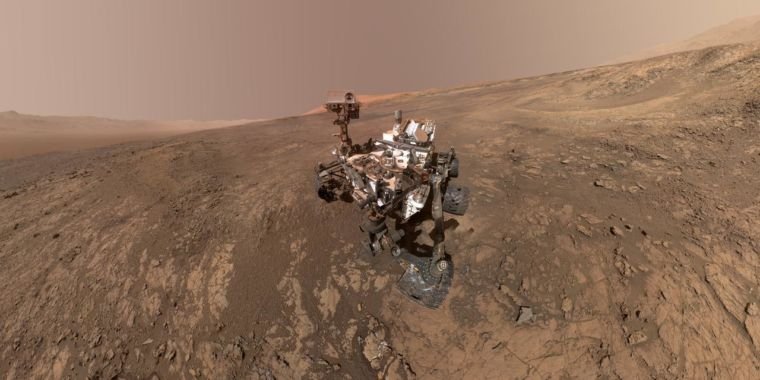 After more than four decades of searching for organic molecules on the surface of Mars, scientists have finally found them in mud rocks on the lower slopes of Mount Sharp. A variety of organic compounds were discovered by NASA’s Curiosity rover, which heated the rocks of Mars to 500 degrees Celsius to release the chemicals.

The finding is significant — for life to ever have existed on Mars, it would almost certainly require organic molecules to get it going; they are the basic building blocks of life as we know it. And if life had begun, it would have left behind organic molecules. However, the confirmation of organic matter on Mars raises more questions than it answers. Based on the information scientists have gathered so far, they can’t determine whether these organics were produced by life, brought to the surface of Mars by meteorites, or are the byproduct of geological processes on Mars.

The Viking landers reached the surface of Mars in the summer of 1976 expecting that they might find evidence of past life, if not life itself. However, when Viking landers sampled the bottom of Mars, they found no past life, nor did their gas chromatograph mass spectrometers find any organic molecules. nada.

Scientists still aren’t quite sure why they didn’t find organics on Mars at the time, but that’s probably because the Viking spacecraft landed in a place where the surface materials they scooped up were essentially little bits and pieces of volcanic rock that had been floating around on the surface, who knows how long. While scientists expected to find at least bits of organic matter brought to the surface by meteors, the harsh radiation on the surface of Mars would have destroyed everything but the most recent arrivals.

Not what we expected

When it came time to plan where Curiosity would land in 2012, scientists were guided by the goal of looking for organic molecules and figured the best place to look for them would be around an ancient lake bottom. In the end, NASA chose a site called Gale Crater, because there were many signs that water was present throughout history. “Gale Crater ended up with a fantastic record of lake deposits,” said Jennifer Eigenbrode, a biogeochemist and geologist at NASA’s Goddard Space Flight Center.

After landing, Curiosity drove through some of the lowest depressions in Gale Crater and sampled rocks. In 2014, scientists reported the first detection of chlorinated hydrocarbons. While this was interesting, it was a pretty bland collection of organic molecules, and the researchers couldn’t rule out the possibility that contamination was left over from the rover’s time on Earth.

“While it was fascinating to find this, it wasn’t exactly what we expected,” Eigenbrode said. “Assuming a geological, meteoritic or biological source, you would expect a diversity of sources. It inspired us to find a better set of rocks for more organic matter.”

And so Curiosity drove to the base of Mount Sharp and sampled some of the mud bricks (a rock formed from mud and clay) found there. If organic molecules existed on Mars, the scientists thought, they would certainly be here. Everything else told them that the lake environment in which the mud rocks formed 3 billion years ago would have been a likely place for life.

To obtain a sample, Curiosity’s rover drills into a rock and supplies a fine powder to the Sample Analysis at Mars (SAM) suite of instruments. The powder essentially falls into a cup that resembles a small thimble, where it is placed in a small oven and heated to temperatures of 500ºC and above. As the sample heats up, gases are released and passed to a tube where they are sniffed by a mass spectrometer. The rest of this gas is sent into a long, thin tube that separates each molecule.

As a result of this careful analysis, scientists have convincingly found thiophene, aromatic and aliphatic organic compounds on Mars. These results will be reported on Thursday in a new newspaper in Science, of which Eigenbrode is the main author. She was particularly intrigued by the discovery of sulfur in the organic molecules, which probably helps explain how the organic molecules were preserved for a long time on the surface of Mars despite the harsh radiation.

With this analysis, scientists looking for clues to past life on Mars are pushing the array of instruments on Curiosity quite a bit. But this won’t be the last chance to search for organic molecules on Mars. In July 2020, the European Space Agency and Russia’s Roscosmos will launch the ExoMars rover to Mars. That summer, NASA also plans to launch the Mars 2020 rover, which should be able to make additional observations.

The ExoMars rover is especially attractive to scientists because it will have both an instrument to detect organics like the SAM on Curiosity, and the capacity to go significantly deeper below the Martian surface to get samples, perhaps two meters. Although scientists can’t be sure, they suspect that if the organic molecules at this depth were produced long ago by biological processes, they would have a much greater chance of being shielded from radiation on the surface.

And what if microorganisms did indeed exist on Mars billions of years ago? Confirmation of this would involve quite an in-depth analysis of rocks on Mars, which is likely beyond the capability of any of these rovers. One option is to return samples, which could happen in the 2020s. The other option is to send people.