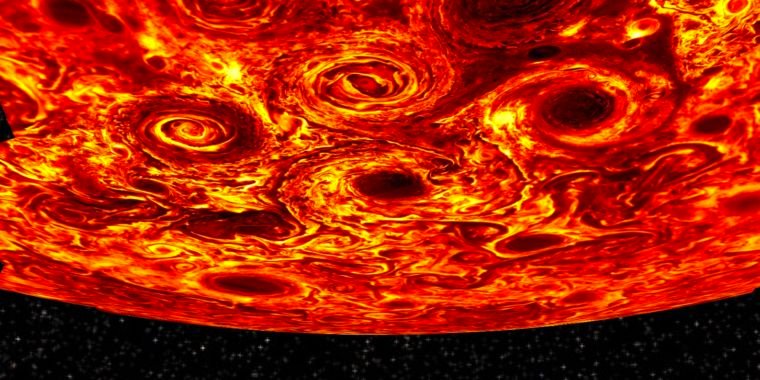 Scientists studying data from NASA’s Juno spacecraft have published numerous papers in Nature make some intriguing and surprising findings this week about the atmosphere of the largest planet in our solar system. The papers are summarized and linked in this NASA press release.

Some of the most notable discoveries come from visible and infrared observations made by Juno during his first five scientific passes in its elongated orbit around Jupiter. (The spacecraft entered Jupiter’s orbit on July 4, 2016. It will make its 11th pass on April 1.) In these first passes, scientists found clusters of strange and prolonged cyclones orbiting Jupiter’s north and south poles.

At the North Pole, eight persistent polygon-shaped cyclones were observed around a single polar cyclone. In the south, five storms encircled a single cyclone. Scientists confirmed the circulation of these storms through time-lapse images. The northern storms, which are 4,000 to 4,600 km in diameter, are smaller than the storms in the southern hemisphere, which are 5,600 to 7,000 km in diameter.

Normally, scientists would expect these cyclones to migrate toward the pole because of the Coriolis beta effect, where vortices in a liquid would naturally drift toward the pole. On Jupiter, however, these vortices persisted and did not substantially drift or merge during Juno’s first observations. This has surprised scientists, because the polar cyclones are so densely packed, with the spiral arms of each coming into contact with their neighbors.

They should push and pull each other and merge as a result. “The question is, why don’t they merge?” said Alberto Adriani, Juno co-investigator of the Institute for Space Astrophysics and Planetology, Rome, and lead author of the paper. “We know from Cassini data that Saturn has a single cyclonic vortex at each pole. We are beginning to realize that not all gas giants are created equal.”

As the researchers note, “The configuration of the cyclones is unprecedented on other planets.” NASA scientists are now trying to model the atmospheric conditions under which such features can form and persist in Jupiter’s atmosphere. More data from future Juno passes past Jupiter will certainly help.