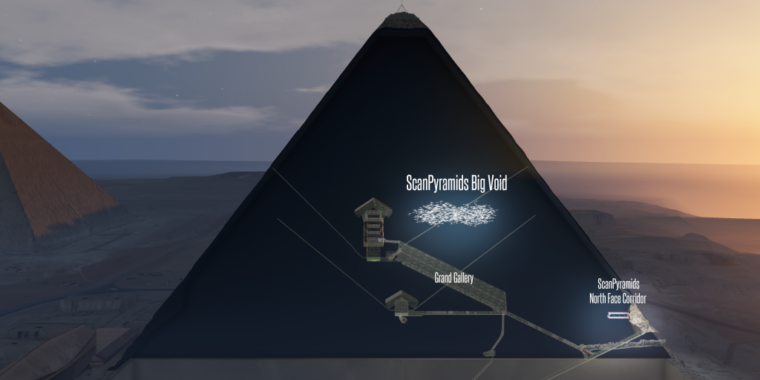 Although the Great Pyramid of Giza in Egypt is one of the largest and most elaborate monuments in the world, we still know very little about how it was built. We also don’t know how many rooms are hidden in it. Now an international research team has identified what appears to be a large empty space or void above the pyramid’s famous “Grand Gallery”. The scientists report this in the journal Nature that they used an advanced technique of detecting cosmic rays to make their discovery.

The pharaoh Khufu (2509-2483 BC) ordered the construction of the Great Pyramid at Giza about 4500 years ago. The structure remained sealed until 820 CE, when the caliph al-Ma’mun broke open one of the walls and discovered three chambers arranged vertically inside. These rooms are connected by the “Grand Gallery”, a large corridor. Since then, many have tried to find additional rooms, but have been unsuccessful. Part of the problem is that we’ve run out of plans for the design of the pyramid, so it’s impossible to know where to look. In addition, today archaeologists cannot explore the pyramid using invasive techniques that could damage the structure. So explorers have to get creative. So Mendhi Tayoubi, the Heritage Innovation Preservation Institute (HIP), organized a team of engineers and physicists who would use cosmic rays to map the interior of the pyramid and look for empty spaces.

Specifically, the team used three different techniques to collect muons, cosmic ray byproducts produced naturally in Earth’s atmosphere that can penetrate thick rock. Muography is very similar to X-ray photography. A chemically treated film captures the pattern of muons as they pass through the rock, giving us a picture of what’s inside. When muons hit solid objects like bricks, their paths are slightly rerouted. But when they pass through empty space, such as the “void” the researchers discovered, their paths remain straight.

To get a muography of the pyramid, the researchers collected traces of muons using nuclear emulsion films and scintillator rhodoscopes set up in the queen’s chamber at the base of the pyramid; they also used gas detectors outside. They then used specialized software to analyze the trajectories of the muon trails. After intensive study and comparison of the results of the three different muon collection tests, the team confirmed that there is an empty space – perhaps a room or corridor – above the Grand Gallery. It also appears to be about the size of the Grand Gallery, about 30 meters long, and is about 15 to 17 meters above the ground surface.

Last year, the same team used muography to detect an empty space in the shape of a corridor behind a chevron-shaped structure on the north wall of the pyramid. Tayoubi said he and the team have wondered if this hallway might be related to the new void they discovered.

The scientists were finally convinced they had found a real empty space after checking their work by using muography to capture images of the Grand Gallery. The pattern created by the void of the Grand Gallery matched the pattern created by the unidentified void above. Now they had strong evidence that the muography technique worked on known empty spaces. This strengthened their confidence that the void they identified was not an artifact or error.

Many mysteries remain. Tayoubi said the team is still unsure of the orientation of the empty space. It can be angled, or parallel to the ground. There’s also no way of knowing if it’s an empty space serving some sort of structural function or a tomb full of treasure. While the team made several advances in muography during the two years of their research, physicist Sébastien Procureur of the University of the South of France said there are hard limits to resolution on muography. We will probably never be able to identify smaller objects in space, if any.

Currently, there is no non-invasive way to reach this void in the Great Pyramid. The team said they hope future generations of scientists can explore space, perhaps by drilling a hole and sending small drones to photograph the space. However, at the moment we don’t have the technology to do that. It might be easier to start exploring the empty space they identified on the north wall of the pyramid, because we know it’s relatively close to the surface of the structure.

The team is now awaiting analysis from archaeologists and Egyptologists about what this room might mean. HIP engineer Hany Helal, who worked with the team, said the group deliberately chose not to work with Egyptologists “so as not to be biased.” He added: “We are scientists and engineers and technicians…we are sure of that [this void] from a scientific point of view. We are convinced that this void exists. What does it mean, why is it there, what is its purpose? We need to have an international discussion about that to know what it could be.”

We know it is different from structures archaeologists have found in other pyramids. Moreover, this open space is not a room whose entrances have been lost over time as the pyramid has aged. Tayoubi confirmed that the empty area must have been hidden when the monument was built. “It’s not a false start, where they tried something and gave up. The engineering and design of this structure was carefully planned,” he said. “It’s not an irregularity of construction. We’re leaving the door open to discuss this with Egyptologists.”