Satellites detect volcanoes that heat up before they explode | Techilink 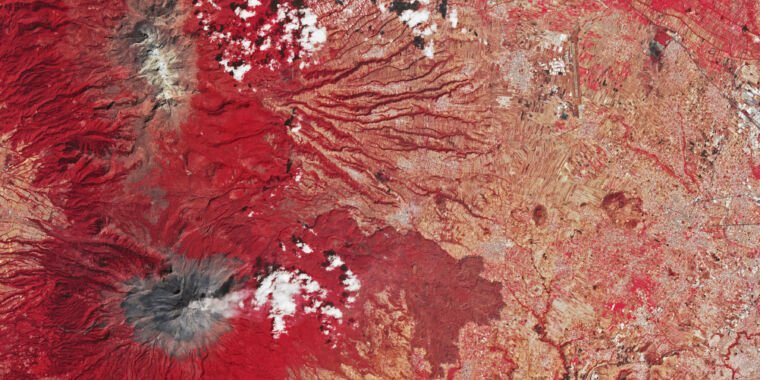 Just as we can often identify the onset of a disease by a number of signs, there are symptoms of volcanic activity that can indicate an increasing likelihood of eruption. Monitoring it may involve detecting surface changes and small earthquakes caused by the movement of magma inside a volcano, or measuring changes in gases expelled from vents. Such signs are used to sound the alarm and initiate evacuations, and they have saved lives. But they are not always perfect.

Japan’s Mount Ontake, for example, erupted without warning in 2014, killing more than 60 people. So additional methods of detecting volcanic activity are always welcome, especially when it comes to subtler signs that might be overlooked. A new study from a Jet Propulsion Laboratory group led by Tarsilo Gerona points to the possibility that currently available satellite data could provide an entirely new way to warn of eruptions.

Heat is clearly a relevant parameter for volcanic activity, but it can be quite variable in the individual places where you might place a thermometer. If we could instead measure all the heat that comes out of a volcano, that would make a lot of sense, since most of the volcanic energy is released as heat.

To try this, the team turned to thermal radiation data from NASA’s Terra and Aqua satellites. Combined, these two two-day passes provide worldwide coverage, and each measurement is integrated over a 1 kilometer by 1 kilometer pixel. There are five volcanoes that have both had significant eruptions since 2002 (when these satellites came online) and are not located on islands too small to span enough pixels for a good signal. These include Ontake in Japan, Ruapehu in New Zealand, Calbuco in Chile, Redoubt in Alaska and Pico do Fogo in Cape Verde.

Increasing temperature trends were observed during the two to four year period prior to each eruption, including the surprising 2014 eruption of Ontake. Temperatures rose only 1°C or less leading up to each event, but these were statistically significant trends and not just sound. The peak temperatures in each record were associated with an eruption.

The researchers say this could be a combination of two processes. First, magma moving closer to the surface — releasing gases — can stimulate hydrothermal circulation, transferring heat to warm the surface from below. Second, if this pushes more moisture into the soil layer, the ground can emit thermal radiation more efficiently, appearing “brighter” to the satellites. Either way, these subtle changes seem easy to detect in the satellite data.

This provides another meaningful metric that helps fill in a complete picture of volcanic activity. It could also make it easier to study a volcano’s total heat budget — the balance of energy coming in from below, and when and where it’s all released. In combination with other monitoring tools, the satellite data can easily be used to increase confidence in alarm levels by putting short-term events into longer-term context. And the more symptoms we monitor, the less likely we are to miss important warning signs.