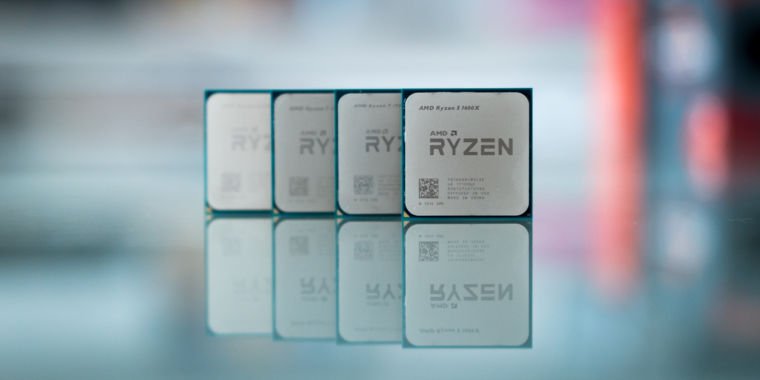 “We can’t be the cheaper solution,” AMD said in 2015, when Ryzen was just a handful of hopeful slides in a press card. But as AMD and the wider tech press knew, it would always be an uphill battle to compete with Intel on both performance and price. The Bulldozer architecture was a failure and Intel had cornered the market with high-end desktop and server CPUs. If you were already interested in creating media or gaming with a discrete GPU, Intel was the best option.

Then came a trickle of technical specifications. Ryzen would be an eight-core, 16-thread chip. It would be a dramatic rethink of AMD’s CPU architecture. It would increase the number of instructions per clock by an unimaginable 40 percent over Bulldozer (eventually, when the Ryzen reviews came in, the actual IPC gains were a whopping 52 percent). There was a hope, perhaps a naive one, that after months of riding the hype train AMD would do the extraordinary and not only catch up with Intel, but be able to beat it.

The reality turned out to be more complex. Ryzen 7, the range that includes AMD’s top-end 8C/16T chips, was an absolute monster that counts heavily on multithreaded tasks – much to the delight of content creators who had to pay Intel’s absurd prices for Extreme Edition and high-clocked Xeon chips. . But raw IPC just stayed shy of Broadwell-E, and somewhat behind mainstream Kaby Lake architecture. More importantly, the game performance was strangely mixed. Boosted to 4K, Ryzen is holding its own against Intel for the most part. Dropped to 1440p or 1080p, frame rates — including those all-important 99th percentile minimums — lag.

Two months later — after a handful of OS tweaks, BIOS revisions, and patches that show what can and cannot be done to improve Ryzen’s performance through software — little has changed. Ryzen, which now spans the range from high-end eight-core chips to mid-range six- and quad-core chips in Ryzen 5, remains a remarkably powerful CPU in some tasks, and a curiously mundane one in others. It’s an architecture that, like Intel’s Broadwell-E, doesn’t enforce an outright recommendation, but instead a more measured endorsement.

The Ryzen 5 series consists of four chips. At the top is the £240/$250 Ryzen 5 1600X, a 95W six-core chip with simultaneous multithreading (SMT, the equivalent of hyper-threading), 16MB of L3 cache and a base clock of 3.6GHz. By default, the 1600X will be boosted to 3.7 GHz across all cores, 4.0 GHz across dual cores and – with a suitably robust cooling configuration – up to 4.1 GHz on a single core via AMD’s XFR (extended frequency range) functionality. Intel’s i5-7600K with its four cores, lack of hyper-threading and meager 6MB of shared cache, looks weak in comparison.

The Ryzen platform is also sufficiently robust. Unlike the now-defunct AM3 platform, the AM4 platform has all the modern features you would expect, including support for DDR4 memory, PCIe X4 storage, and USB 3.1 Gen 2. The high-performance X370 chipset supports overclocking (all Ryzen chips are unlocked) as well as SLI and Crossfire. The cheaper B350 chipset sheds a few PCIe lanes and SLI and Crossfire support, but still allows for overclocking. There’s even a full lineup of overclock-friendly micro-ATX and mini-ITX motherboards in the form of the X300 series. They have not yet been released, but are expected soon.

Ryzen puts AMD on par with Intel, which is a remarkable achievement considering how far it had fallen with Bulldozer. The under-the-hood architectural improvements – all of which you can read about here – are smart and favor efficiency over uncontrolled performance. And while AMD’s somewhat hopeful TDP readings mean its 95W chip still draws as much power under load as Intel’s 140W chip, it’s a huge improvement.

However, as with Ryzen 7, Ryzen 5’s specs aren’t always indicative of real-world performance. Intel’s Kaby Lake architecture, and to a lesser extent Broadwell-E, maintain a significant lead in raw IPC. For the applications that prefer raw single threaded performance, Ryzen loses it. There are also other problems. Ryzen has proven to be more sensitive to memory bandwidth than Kaby Lake, but many motherboards in the enthusiast X370 line-up refused to boot at higher memory speeds at launch. Subsequent BIOS updates have largely resolved this issue, but benchmarks show that the memory controller itself remains a weak point.

Just like overclocking is a nuisance, which is an all-or-nothing deal: you either run Ryzen at the maximum clock speed you can always achieve, or you opt for Ryzen’s ability to automatically adjust the clock speed in small 25MHz increments and saves power. There is no middle ground. Even if you choose to overclock, the ceiling with typical air coolers or all-in-one liquid coolers is much lower than with Kaby Lake and Broadwell-E. Where an 8-core Broadwell-E chip can reach 4.5GHz without any problem, Ryzen gets around 4.1GHz across the board, even in its six- and quad-core forms.

That’s disappointing, but not entirely unexpected. Ryzen 5 is the same chip as Ryzen 7, but with cores disabled. Ryzen is designed around a pair of four-core core complexes (CCX) interconnected via AMD’s “Infinity Fabric” interconnect. In the 1600X and 1600, one core of each of those CCX is disabled. In the 1500X and 1400, two cores of each CCX are disabled. Many hoped that the quad-core chip would abandon Infinity Fabric and instead use four physical cores from a single CCX. That would, in theory, negate any potential performance issues arising from Infinity Fabric, which relies on memory speed and clock speed.

Either way, it does mean that the company is trying to maintain parity between chips by making sure there are always two CCXs actively connected by Infinity Fabric. AMD was also forced to release a Ryzen-optimized power profile to prevent Windows from prematurely parking individual cores to conserve power (the new profile moves power management directly to the CPU), while also addressing performance issues with SMT, similar to with how Intel’s hyper-threading had problems at launch.

These are classic early adopter problems — and more may emerge as others are resolved. But while Ryzen clearly needed more development time before rushing to market – a sentiment shared by at least one motherboard manufacturer – it’s now stable enough to recommend as a daily driver.