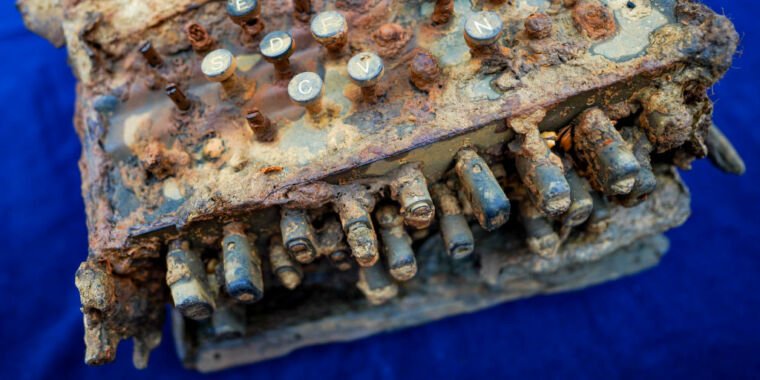 Divers scouring the Baltic for discarded fishing nets stumbled upon the rarest of finds: an Enigma encryption machine used by the Nazis to encode secret messages during World War II.

The electromechanical device was widely used by the Nazi military to encrypt communications, which were usually sent via radio in Morse code. Three or more rotors on the device used a current cipher to convert each letter of the alphabet into a different letter.

The Enigma had the appearance of a typewriter. An operator would use the keys to type plain text, and the converted ciphertext would be reflected in 26 lights above the keys – one light for each letter converted. The converted letters would then be transcribed to derive the ciphertext.

Encryption keys were changed using a series of device settings that were changed regularly using lists made available in advance. People who received the messages had to use the same lists as the senders to make the messages readable.

Divers commissioned by the environmental group WWF found the Enigma machine last month while searching for abandoned fishing nets in Gelting Bay off the coast of Germany. As the image above shows, the recovered device was rusty and corroded, but individual keys with the letters they designate remain intact and clearly visible.

“A colleague swam up and said, ‘There’s a net over there with an old typewriter in it,'” Florian Huber, the lead diver, told DPA news agency. The team soon realized that the device was something far more remarkable.

“I have made many exciting and strange discoveries over the past 20 years. But I never dreamed that one day we would find one of the legendary Enigma machines,” Huber told Reuters.

The diver said he suspects the device was lost shortly before Germany’s surrender in May 1945. At the time, the Nazi leaders issued an order to sink submarines in Gelting Bay to avoid capture by the Allies.

The Enigma made it difficult for the Allies to track German submarines until a British team led by mathematician and scientist Alan Turing broke the encryption of the device used. Building on breakthroughs from scientists at the Polish Cipher Bureau, the achievement made it possible for the Allies to decipher messages about German military movements. Many historians attribute the achievement to shortening the war and avoiding many thousands of deaths.

Experts from the State Archaeological Museum are going to restore the machine. The process, which includes extensive desalination, is expected to take about a year.