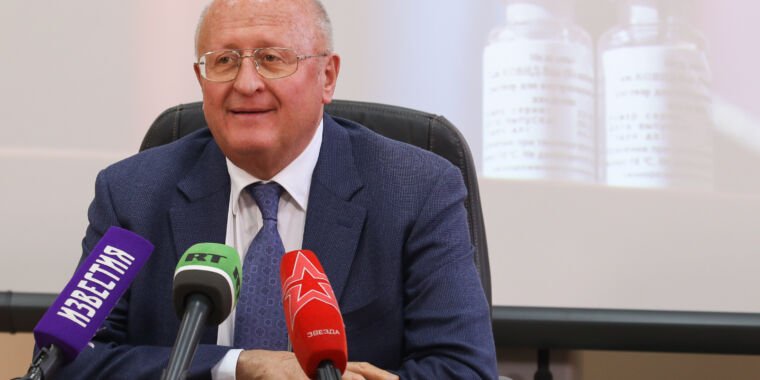 A top Russian researcher behind the Sputnik V coronavirus vaccine defended the vaccine’s use before testing was completed, saying he plans to release clinical trial data early — so early, in fact, that the data is unlikely to be interpretable.

Alexander Gintsburg, head of the Gamaleya Institute that developed Sputnik V, outlined his views on the vaccine and the pandemic in an interview published Tuesday with Reuters.

“People die just like in a war,” Gintsburg said as he sat in his wood-paneled Moscow office, holding a crystal model of a coronavirus. “But this accelerated pace is not synonymous — as some media has suggested — with cutting corners. No way.”

Russian President Vladimir Putin announced in August that the country had granted the world’s first regulatory approval for a vaccine against the pandemic coronavirus, despite not even embarking on Phase III clinical trials, which have typically tested safety and efficacy. of a vaccine in tens of thousands of people. The approval was soon criticized by health experts, who saw it as a dangerous political stunt to give the appearance that Russia was leading the race to develop a vaccine.

But Gintsburg defended the approval on ethical grounds, saying, “The choice was between giving people the chance to protect themselves or letting them play roulette with this deadly infection.”

The Department of Health has since given doses of Sputnik V to about 400 members of the general public who were not enrolled in a clinical trial, according to Reuters. Initially, government figures had suggested that millions of people would be vaccinated.

Meanwhile, Russian researchers have continued with the standard Phase III studies. On September 9, researchers vaccinated the first 5,000 trial participants and plan to vaccinate more than 40,000 in total. Gintsburg said researchers will release data from those participants after just six weeks (42 days) of monitoring. That would mean the first data would be ready on October 21, and Gintsburg expects it to be released in late October or November.

Such early data is unlikely to be informative or even interpretable, given the small group of participants and the short follow-up. There are currently several vaccines in Phase III trials worldwide, including some that started in June and July. None of the researchers and companies conducting these studies have yet to release data, and most of their progress is measured by cases of COVID-19 in participants (both those who were vaccinated and those who received a placebo) instead of any time.

For example, Pfizer and its partner BioNTech began a Phase III trial of a COVID-19 vaccine in July. The companies have said they will conduct an initial interim analysis when 32 people in the trial test positive for the virus. Moderna, which also launched a phase III trial in July, said it will conduct an interim analysis when there are 53 cases in trial participants. AstraZeneca, which started a phase III vaccine trial with the University of Oxford before July, is waiting for 75 cases before doing an interim analysis.

If interim analyzes are extremely positive, vaccine developers could be release the data and even stop trials early. To do that, they would need to recognize that most cases of COVID-19 in study participants who were in the placebo group rather than the vaccinated group, suggesting that the vaccine provided protection against disease. But it’s more likely that the data will be more difficult to interpret in the beginning. And releasing “promising” but inconclusive data can easily lead to over-interpretation.

Stopping research early is even more risky. Once a trial has ended, it is very difficult to assess exactly how well a vaccine works. There are no longer any trial controls or placebo groups for comparison.

Still, President Donald Trump has pushed for interim analyzes to be conducted as soon as possible and for a vaccine to be rolled out to the public by November 3, Election Day. Experts say it is extremely unlikely that a vaccine will be ready before the United States elections. In addition, the Food and Drug Administration has been working to tighten the requirements for any vaccine to be approved based on early data for interim analyzes (although the White House may overturn those stricter guidelines).

But according to Gintsburg’s timeline, Russia could have Sputnik V in time for November 3.

“For me, for example, it’s too short,” Gintsburg said of the 42-day analysis. “But for people who are interested in how things are going, it’s been too long.”